Xilen's wholesome realm of healing and self discovery.

Melior    Realms      Euphoria
Accessible only through a mirror, Euphoria is a realm created by Xilen using the primordial magic of creation attained only by the Ordained. This wholesome realm of growth and self reflection is believed to be the safest plane of existence and is associated with the Ardorists who worship Xilen and his practises.

The touch of Euphoria stays with you for a long time.
I'd say you come back as a different person, but really you return as your best self.
— An Ardorist who has visited Euphoria

Creation of a Safe Space

Fifty years ago, Edutar failed to protect the world during the cataclysmic events of The Rupture. His body was torn apart when trying to close a large rift, which fell to the world as the Pieces of Fate.   Those who gathered these golden fragments became ordained and took on Edutar's mantle and a small portion of the powers of creation. Xilen came to discover the golden heart of Edutar, and first used his newfound powers to build his self confidence, mental fortitude, and moral groundings before using such immense power around anyone else.   Xilen manifested the realm of Euphoria, which he learnt to enter through literal and meditative self reflection with the aid of a mirror - and he used this personal sanctuary to become a happier and grow as a person.   After finding his true form, Xilen went back out into the world of Melior to help people rebuild their homes and lives after the chaos of the Rupture. With kindness and the good faith of his miracles he (unintentionally) quickly amassed a devout following of people wanting to help as he does, which now identify themselves as the wholesome religious group called the Ardorists.

Let go of what you see.
Take the time to feel for your soul

Have love for yourself, even if just a little
After all, you will always be here.
— Xilen guiding a meditation 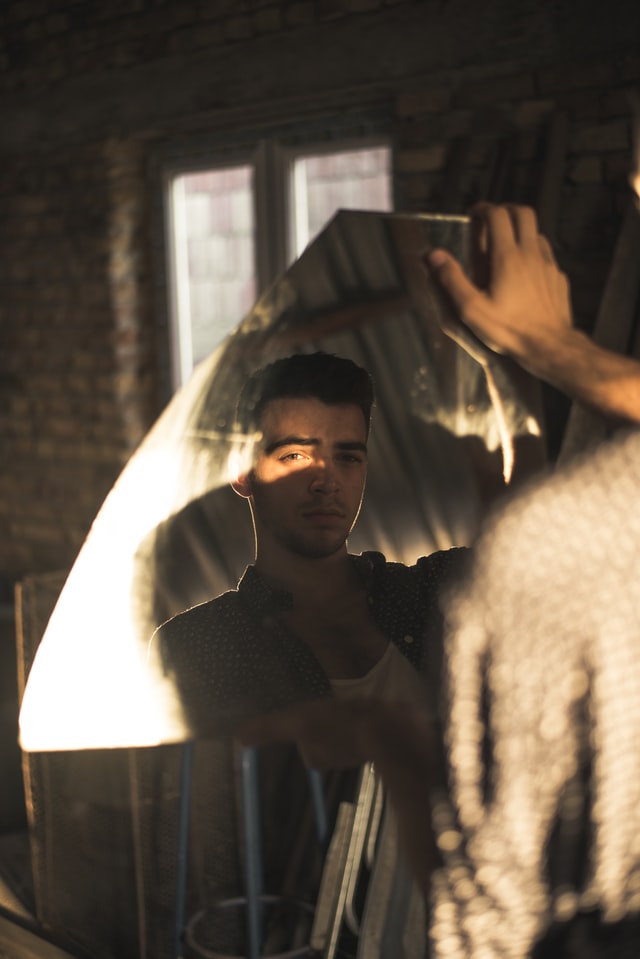 A troubled person seeking Euphoria by Milan Popovic on Unsplash
Euphoria cannot be accessed via rifts like the other planes of existence. It was uniquely formed after the Rupture using Xilen's powers of creation, a primordial kind of magic that is different from what seeped in from other realms.   Instead, Euphoria is only accessible through physical and meditative self reflection using a mirror (or other highly polished surface). The process involves "the art of looking" and seeing beyond one's own physical bounds.   With clear intentions firmly in mind, those who seek Euphoria must make physical contact with the mirror - this is often done with a palm of the hand as Xilen traditionally uses.   Through further meditation and long, slow blinks, the physical form slowly begins to feel a shift from one side of the mirror to the other - into Euphoria.   Small motions can carefully aid the transition between realms, such as spreading and interlocking fingers with one's own reflection, or slowly leaning inwards to kiss one's self as an act of self acceptance and love.


You'll know when you've managed to enter Euphoria when you feel the warmth of your own touch upon your skin.   There's nothing like it,
it's like the touch of someone who cares deeply for you.
— An Ardorist who has visited Euphoria

Entering Euphoria can be a little startling; when you open your eyes after shifting through the mirror, you will see the place you were just in - but not reflected, and without your own image looking back at you.   No matter where you came from, when you look back through this window you can instead see the world anew with all of the good, postivity, and inspiration shining through. Folks and environments glint with golden aspects of hope, outlined by auras of potential for growth and change.   Turning around, inexperienced visitors may first experience Euphoria as formless, foggy, or even dark before their mind slowly solidifies what it means for them. After a short time to acclimatise, the space around the individual will manifest to what resonates with their soul - making them feel truly alive and completely connected to themselves with understanding and contentment.
Even if a person is sightless or lacks visual imagination, it all comes from within and presents across all of the senses to empower the one who entered.   Leaving the realm is much easier than entering, and is as simple as facing the window they entered through, closing one's eyes, taking a deep breath - and exhaling fully until the breath can be felt bouncing back off of the original mirror.
Log in to World Anvil to view
bonus content and secrets!
Alternative Name(s)
Xilen's Realm
Type
Magical Realm
Owner/Ruler
Xilen
Characters in Location

On occasion, Xilen sometimes grants blessings in the form of a Euphoric Awakening to those deep in their despair. Xilen takes their hand and invites them to an extended journey through Euphoria to show them how good life can be, before returning them home safely filled with renewed confidence.   The experience is always personally tailored for the individual, with every small detail accounted for.

The three-horned god of Euphoria whose realm is named after the feeling of intense happiness.

How the golden pieces of fate gave powers of creation to their new eternal holders.

Finally! Xilen is such a sweetheart <3 I love your mention of "Even if a person is sightless or lacks visual imagination". Perhaps not for this article, but I would eventually like to know if there are people that oppose Xilen, and what are their reasons

<3 Ah, I see what you meant with the portal dilemma :) I think it is explained well. I like that the realm is not immediately clear and definite, but more of a safe place for exploration.

Aw man, I loved the ending with the watchful eyes. This is great TJ, really enjoyed this read. It feels so liberating.

I always knew there was something about mirrors...

Wonderful article! I didn't think from the name Euphoria that it would be such a wholesome realm and more something in excess.   We could all use a vacation in this realm sometimes!

This article choked me up for reasons I can't quite describe. Like actual tears.   Great job.