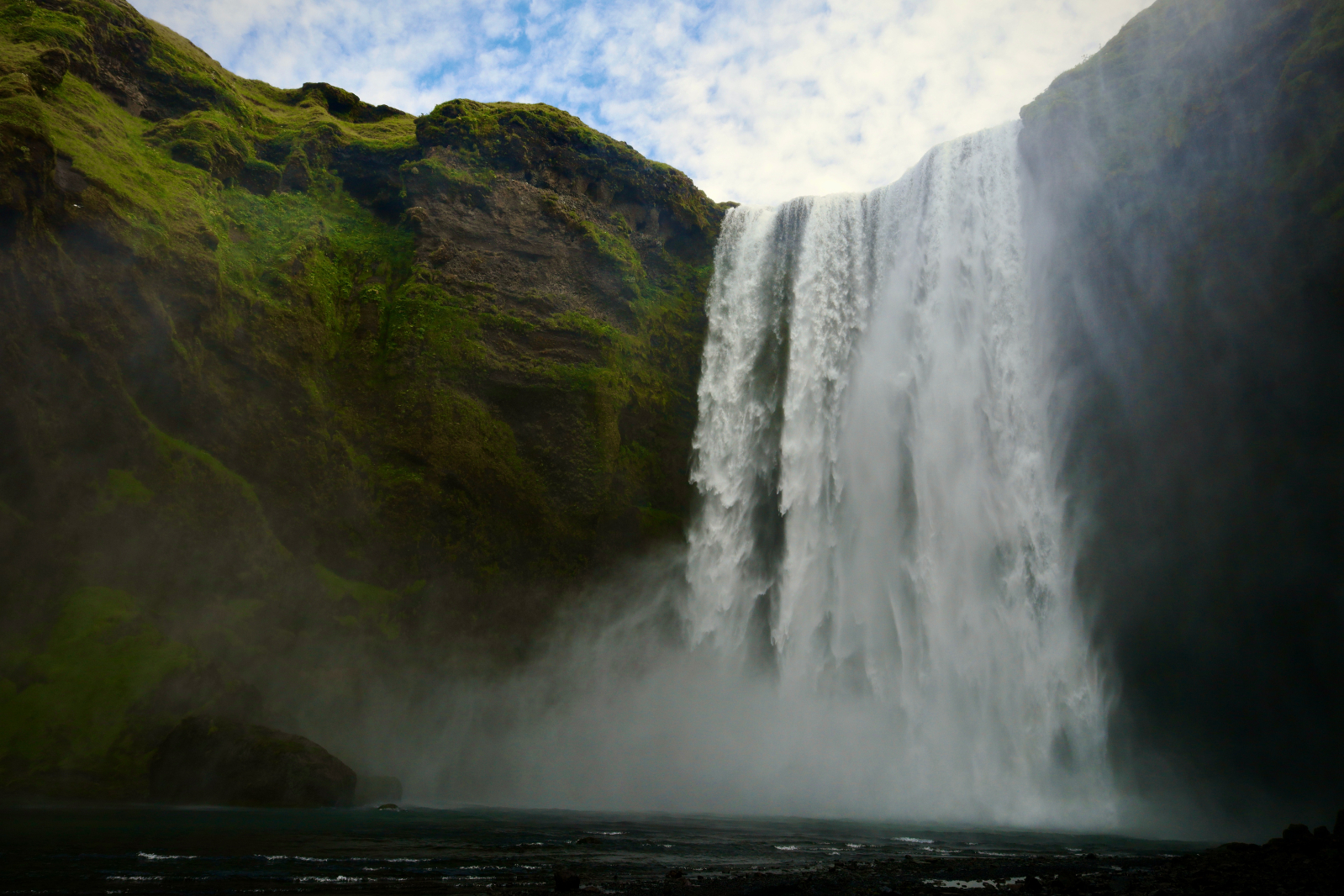 I am using Spooktober prompts to create sights & events for my Pathfinder campaign. I did this last year, and although this year I will be doing less prompts, I am looking forward to using the words as inspiration on what to present to my players.


Background
My players just kicked the ass of a hobgoblin army, who retreated along a cliff they were already setting up to climb down before the PCs arrived.   My PCs now have to decide whether to give them chase, or investigate the camp. As such, I have to plan for both possibilities, as well as, what happens when they all reach the bottom of the cliff.

The PCs are standing in the abandoned hobgoblin camp, as the hobgoblins made their hasty escape through the cliff next to the waterfall. The PCs can either search & investigate the camp, or follow the hobgoblins straight away. “The abandoned hobgoblin camp sits under the rising water vapours drifting from the waterfall. It is eerily empty, signs of the quick haste with which the hobgoblins abandoned it are apparent everywhere. Smoky fires are quietly burning and something even bubbles away in a large set of pots. Little war gear has been left behind, however. No weapons or armors are visible, beyond those the dead hobgoblins were wearing when you killed them.”   If the PCs investigate the camp, they can find in one of the larger tents an abandoned journal, a mix of campaign and dream journal. “The journal is written in Goblin and details in detail the different troop movements & training, their battles, losses, and occasional weather or terrain remarks from their journey. About a third of the days the journal ends with cryptic remarks or tales unlike anything else in the otherwise dry and military journal.”   A few passages stand out from the rest:

13 Days since Hokvuc emergence: The Dreamchosen's visions are too strong to ignore. We are mobilizing the whole army, rather than hold out and get stronger as more hobgoblins emerge. The dreamstone is by a frogfolk settlement at the end of the river. The visions will carry us there.   20 Days since Hokvuc emergence: We have arrived at the dreamed and dreaded waterfall. Plans to access the river are in motion. Scouts sent left and right, as well as down the cliff.   24 Day since Hokvuc emergence: Collapse has killed a lieutenant, six goblins, and all four hobscorpions. Yanthur will have my hide for losing her little pets. Soldiers report strange sounds from the waterfall, carried by the mists. Afterwards, they refuse orders to reclaim potential survivors. Sending clerics to investigate. Awaiting disciplinary actions against the soldiers and their leaders from their next-in rank for this costly error.   26 day since Hokvuc emergence: After careful study, scouts are sure that traversing the right canyon is a viable alternative to climbing down through the cliff. They assured us that the area only gets flooded once a month, and that the whole army could get through before the new flood begins. Decision was taken to split the army and send half in now, the other half will continue building a way to travel down. The dreams cannot be ignored and the cliffs were part of our destiny.

Hear me, warriors, chanters, and controllers! Hear the tale of the Dreamchosen and her army, who are crossing dry land and wet water to get her stolen artifact.

The waterfall is impossibly tall and mists cover what would be its end. The cliff is outfitted with rope ladders, pitons, and the occasional wooden-reinforced ledge.

If the PCs look like they are going to use the hobgoblin gear to descend, the hobgoblins enact part 1 of their escape plan: destroy the gear as they advance down.

A hobgoblin on the rear gives a scream and pulls taught a rope attached to the cliff’s edge. A squishy loud booming noise is followed by a slow sizzle.

An acid “bomb” triggered by the rope pull is eating away the rope ladders & pitons, splash damage to anyone in the vicinity.   The acid bomb deals 2d6 acid damage to anyone within the marked area, and 1d6 each round afterwards until they clean themselves. In the splash radius, damage is 1d4, and no persistent damage.

The hobgoblins leave broken ledges, cut ladders, and unusable gear in their wake. Pockmarked rocks and dissolved metal point to their extensive use of acid to quickly destroy their gear so that it becomes unusable.

Traversing the initial areas full of broken gear is an arduous task. It takes 1 minute to clear it, or people can safely cross it with a combined DC 25 Acrobatics and DC 25 Climb. Failure to do so inflicts 1d10+1 bleed damage.

The waterfall mist was magically enhanced by the grippli druids who foresaw the need to protect the cliffs around the waterfall from possible invaders, many generations ago. Only the middle parts of the waterfall are enchanted in this way. The mists affect any non-grippli creatures flying of climbing anywhere within 500 meters of the area.   The mist is a continuous Insanity effect. The DC to save against the spell is Will save DC 22.

The Untuteb grippli's relic is useless to them against a threat like the hobgoblins, the relic being useful only to extraplanar creatures that may seep through the planar portals at the bottom of the lake and above it.   To protect it during the goblin invasion, a grippli has created an illusory stone wall (through the spell illusory wall), so that it looks like there is nothing of note behind the waterfall.

An interesting sighting to hint towards Untuteb's relation with tengus,

As you go down the cliff, which aside from the hobgoblin holes in the ground and different broken gear, has been unmarred by humanoids, just a scraggly cliff, you find a beautiful, but shattered engraving.   A smoother part of the cliff had been used to carve a beautiful bird painting. However, during their climb down, the hobgoblins have severely damaged the engraving.

In order to try and thwart the PCs advance, the hobgoblins throw a curse at them, empowered by the Dreamchosen to do so. They use the spell Ill Omen to do so.

Drawing forth from the chaotic energies that the hobgoblins use for their spells, a hobgoblin stares with an unusual firey shadow in their eyes and starts shaping a spell. The focused hobgoblin shapes a curse attacking the path laid before your soul, forcing it to take the worst path, leading your next choices to veer towards disaster.   Once they are done, the fire in their eyes go out. The hobgoblin looks surprised but pleased at themselves.

As the hobgoblins approach Untuteb, the grippli village at the bottom of the waterfall, the PCs start hearing their screams. These soon subside though, as the gripplis enact their escape plan and hide behind the waterfall.

The echos of grippli anguish at the bottom of the waterfall resonate, despite the thundering waterfall. The anguish echos of too many gripplis to count.   The grippli echos eventually subside, the roar of the waterfall is once more the only thing filling your ears.

In a last-ditch attempt, the grippli cleric casts deeper darkness on a few objects throughout the town to obfuscate the whole area.   This is more as a distraction to obfuscate their real plan: to hide behind the waterfall where the relic is stored. There is also a hope that their village will be spared, but if that cannot be, at least, they hope to be safe. In the last few days, every since hobgoblins were sighted at the top of the cliff, attempts to widen the area where the relic is kept have been maintained day and night.

Past the mist, and closer to the pond, giant dragonflies roam free, preying on anything but gripplis.   The giant dragonflies make flyby attacks, preying on those creatures climbing the cliff as easy targets. They forgo their grab until they have rendered their prey unconscious. Instead, they do an extra d8 of damage and have a +2 to their attacks (resulting in: bite +11 (3d8+6)).   If the dragonflies successfully render a creature unconscious with their bite, they carry it to safety into the mangrove forest past Untuteb.

When Verti hobgoblin falls down the cliff, as their troop quickly climbs down, the PCs observe the pain and anger in their fellow hobgoblin, who nonetheless continue the descent dutifully.

AAAAAAAAAAHHH! A hobgoblin screams in fear and anguish, a scream that needs of no spell to be understood. A couple of hobgoblins look in despair, as one of their troop falls and fails to grab their outstreched arms. The falling hobgoblin starts flailing, before quickly landing with a splash in the pond below the waterfall. The flailing does not stop however, as the hobgoblin quickly drowns below, while the rest of the troop resumes the climb, with mostly long faces amongst them, with a couple of very resentful hobgoblins looking towards you.

This world uses trademarks and/or copyrights owned by Paizo Inc., used under Paizo's Community Use Policy. We are expressly prohibited from charging you to use or access this content. This world is not published, endorsed, or specifically approved by Paizo. For more information about Paizo Inc. and Paizo products, visit paizo.com.   However, this world is independent of Paizo's world (Golarion) and most content that you will read here has been created and written by myself.
Cover image: by Erica Filippelli
Article template
Generic article
World
13
Author
MGatta
Publication Date
15 Oct, 2022
Creation Date
15 Oct, 2022
Last Update Date
16 Oct, 2022
Visibility
Public
Views
92
Favorites
4
Comments
0
Work In Progress