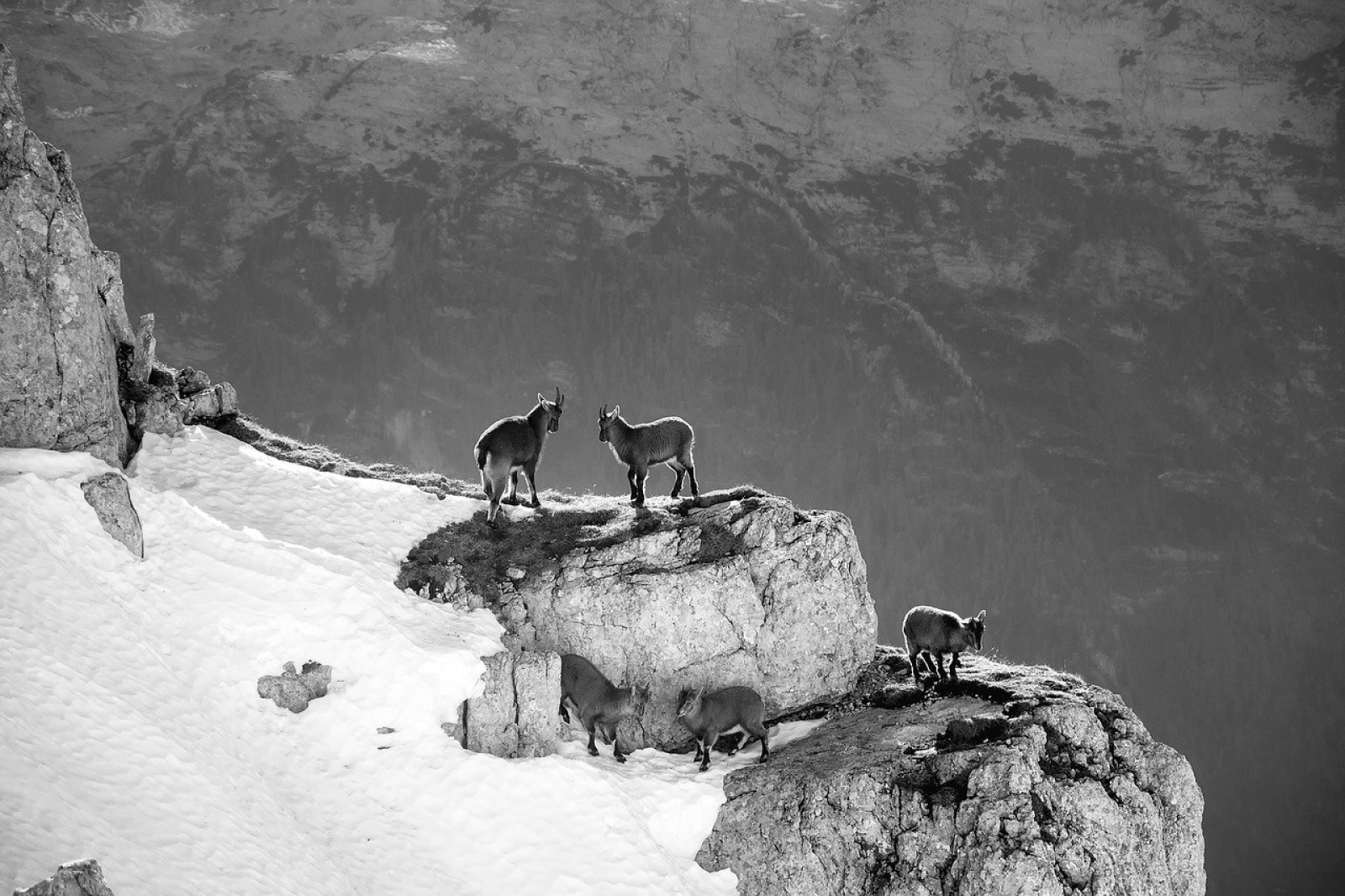 In search of a spider's lair

A good lair does not sit empty for long...

Tracking the spider to its lair

A successful survival DC 13 check in the outskirts of Jiehgied reveals a relative dearth of animals towards the mountains. No tracks are left of the actual spider tracks, as they have been long covered by snow.   Note: The dearth of animals is not caused by the previous existence of the spider though, rather, a cockatrice has been using the area as its hunting grounds.

As the PCs wander towards the mountains, getting closer to the den, they see the following:

A misshapen figure flies upwards, a strangled screech coming from it. It is covered in a strange white film that makes it difficult to distinguish.   On its shadow in the snow, its figure is slightly more pronounced, an elongated body with a pair of beating wings.

The creature flies haphazardly to a rocky promenade and starts getting rid of the spider's webbing that coats it. Once they are done, they start using the stones as scratching pillars, trying to relieve the many painful, poisonous stings they got from the baby spiders.

A nightmarish combination of a chicken and a lizard prances in between the rocks. Batlike wings adorned with spider webs shift restlessly as it moves. Scaled legs ending in wicked talons and scraggy rocks are both being used by the beast as it madly scratches itself.

A successful DC 13 knowledge (arcana) identifies the beast as a cockatrice. Cockatrices are known for their ability to petrify people.   The following knowledge is also gained incrementally according to the final result of the knowledge (arcana) check.

If the PC waits to see what the cockatrice does, they will see that it returns to the spider lair the following day, feeling recovered and ready to slain the remainder of the tiny spiders. Sleeping while staying close enough to observe the cockatrice is near impossible. Attempting to do so requires a Will save DC 19. Only someone with nerves of steel could sleep that close to a monster.   The place would provide a great nest to attract a female. The cockatrice is busy in their determination to get back to the cave, and as such, are rather distracted. Sneaking up on it and following to the lair requires only a successful DC 11 Stealth check.

Fighting or tracking the cockatrice

If the PCs kill it, they can spot the numerous bite marks after very close inspection. The bite marks have irritated the tissue around them, a clear sign of poison.   They can slowly track the areas the cockatrice has been exploring (its flying skills are poor, and it often walks). Eventually, the tracks lead them to the cave where the spider that ate livestock used to live. It is now infested with thousands of tiny spiders who are eating each other and the remains that their mom had wrapped up in silk for later.

While the PC killed the spider that had been preying on livestock, she never tracked the spider back to her lair. The messengers' corpses that lay within and their very important message lay forgotten on its webs.

With the large spider dead, a male cockatrice has seen the lair as a fit place for him to establish a nest. They were not expecting fierce resistance from the spider's babies and have to flee from the cave. This gives the PC an opportunity to spot the cockatrice, potentially deal with it, and find the spider's former lair within. 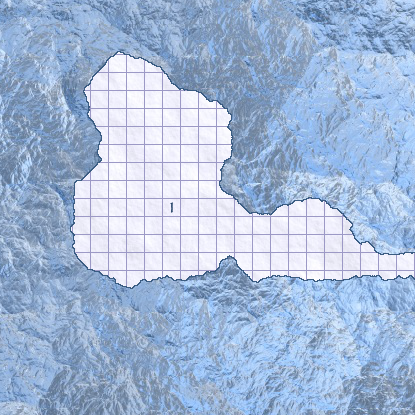 At the spider's lair

Long stones frame the entrance to a cave in the mountainside, half-hidden by the accumulation of snow in between the stones. The frozen stones leading inside glimer with the reflected light from the snow.

Diminutive spiders coat the cave and they will try to swarm the PC if the PC gets within 10 feet of any area with spiders or webbing. The PC will have to deal with a spider swarm.   Inside the cave, there are plenty of remains of livestock, including two young gakka skulls which have been chosen as a great mini-lair for a couple of the surviving spiders of the previous brood. The spiders move the skulls with them and attack any who comes close to the skulls.   A few large cocoons stand at the side of the cave. One is completely empty, but two of them still have dwarven remains within them, half wrapped with silk, half exposed thanks to the laborious work of the baby spiders who have been gorging on them.   Treasure: With their upper halves gone, and the other half frozen, the corpses are beyond recognition. Both of them carry identical messages within them, in their coin purse. They also carried a total of 1d20 copper pieces, 2d10 silver pieces, and 1d4 gold coins.

Hobgoblins have been sighted in the homesteads of west Getón. Urgent assistance by a contingent of wardens is requested.

Other treasure: The PC can find a few ( Roll for Tiny Spider Stones ) tiny spiders that have been converted into stones. 1d4 of those petrified spiders regain their spider status 3 days after their encounter with the cockatrice.   One of the gakka skulls is of a mature gakka, and their horns are still luminescent. They can be used as torches.   ↑

This world uses trademarks and/or copyrights owned by Paizo Inc., used under Paizo's Community Use Policy. We are expressly prohibited from charging you to use or access this content. This world is not published, endorsed, or specifically approved by Paizo. For more information about Paizo Inc. and Paizo products, visit paizo.com.   However, this world is independent of Paizo's world (Golarion) and most content that you will read here has been created and written by myself.
Cover image: by David Mark
Article template
Plot
World
13
Category
World Ember 2021 in Challenges
Author
MGatta
Publication Date
11 Dec, 2021
Creation Date
11 Dec, 2021
Last Update Date
1 Jan, 2022
Visibility
Public
Views
397
Favorites
17
Comments
4

A cool short adventure! I would suggest adding a pronunciation guide to Jiehgied. It may difficult for people to read

Thanks, Kajetan!
I've got no pronunciation guide and precisely because of that, none is needed imo. I made up that word; there's no conlang involved. So it can be read any way really.

Very fun adventure, love the little spider stones in the end that may or may not turn back to annoying little spiders !

I'm so glad you think so! I thought it was a fun touch for reminding players that a ***atrice was here and a potential way of them learning that the petrification is not always final.

Thanks! It was a side plot for my one-on-one campaign :)

Interesting little adventure, and quite easy to slot into most campaigns or settings. I like the attention given to time and what each player in this adventure is doing at any given time. Makes it a lot easier to adapt to however the players decide to approach the situation.   One thing I'd like to know though (even if it's kind of unlikely to matter if you run the scenario). What would happen if the players chose to not intervene at all, or wait for the conflict between the ***atrice and the spiders to be resolved before doing anything. Would the spiders drive the ***atrice off again or would the ***atrice take over the lair?

I had written an answer but I'm afraid I had to delete it, as you are now my player...