A Tiefling bard whose main goal is to make people laugh. She always wants the best in life, and strives to make the world a better place for everyone she meets, even just for the day.

A Tiefling bard whose main goal is to make people laugh. She always wants the best in life, and strives to make the world a better place for everyone she meets, even just for the day.

Phluphii is an eccentric tiefling entertainer, spending her days telling everyone and everything about her many travels. She always tells a bold tale, whether it be about the bread she ate last night or the terrible creature who tried to steal her necklaces! She wishes to fill the world with joy, one way or another!
Age
21 yrs old
Gender
Female
Eyes
Light Blue
Hair
Vibrant Purple
Skin Tone/Pigmentation
Silver & Indigo
Height
5'7"
Weight
143lbs

Phluphii wears green rags and a matching dress, which she hand-sewed herself. She claims they help her blend into the environment, but in reality green is just a nice colour, and her mother always said it looked good on her. She always has purple gemstones on her at all times. Two necklaces, and an anklet.

Phluphii was born to two loving parents, who cared for her through her life until she was old enough in their opinion to leave. The small tiefling had a skip in her step as she left her hometown and into the rice fields that surrounded it. Chasing rabbits and butterflies all the way to the forests on the outskirts of her vision, Phluphii made camp- unknowing to the fact of her hometowns destruction just out of view- and fell asleep dreaming of the many adventures ahead of her. She found herself singing little songs as she walked, during her adventure, even telling passersby about her lovely time in the sun. She danced and sang, even finding herself a small group of travelling musicians which she hitched a ride from to the next nearest city. She spent her free time exploring the ins and outs of the city, from the skyline to the sewer system, and was even officially accepted as a member of the travelling group. Phluphii agreed, spending a good 2 years with the band they had grown to be, before they had a terrible breakup and she was left homeless and without a way to travel unless she was on foot. Phluphii wants nothing more then to see her bandmates again, since they had abandoned her with just a note- she is certain they were kidnapped, and sings her tale to anyone and everyone who will listen nearby.

Phulphii was never in school, or taught math or english, instead she learned basic survival skills or skills she may need in her everyday life.

Phluphii doesn't understand why people don't love unconditionally like she does! She is panromantic and asexual.

Phluphii has identified as female all her life, and continues to do so. She is cisgender. 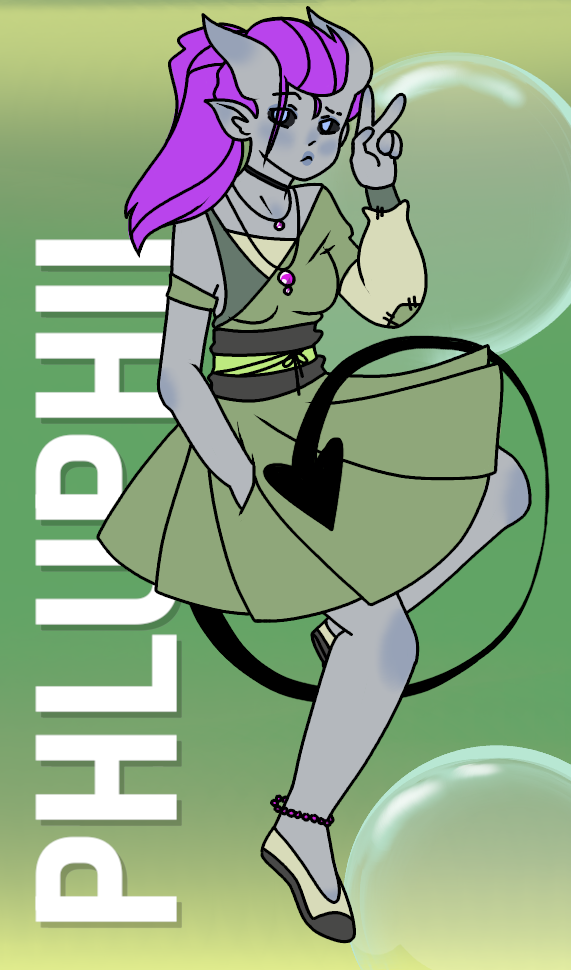 The major events and journals in Phluphii's history, from the beginning to today.

The list of amazing people following the adventures of Phluphii.