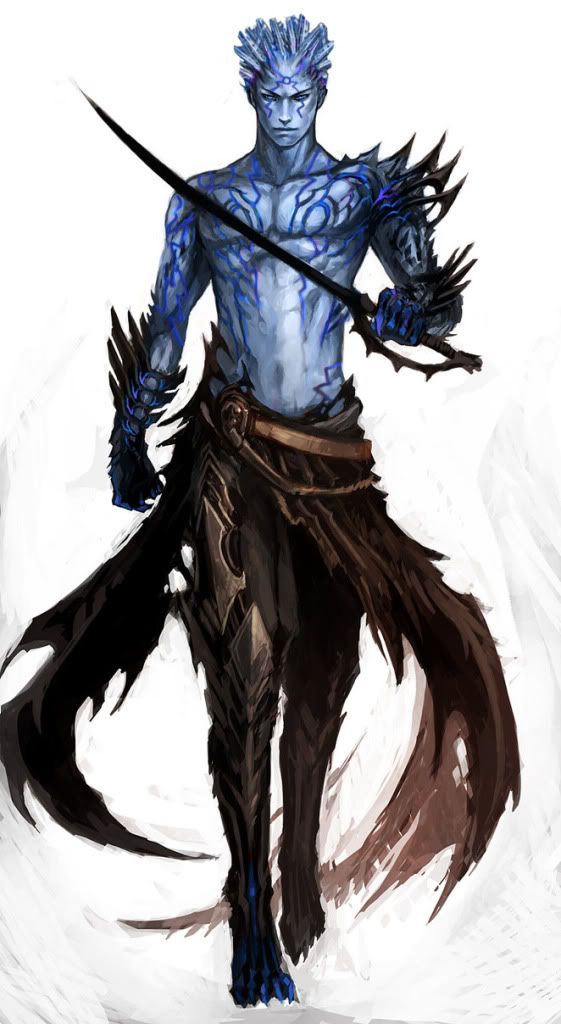 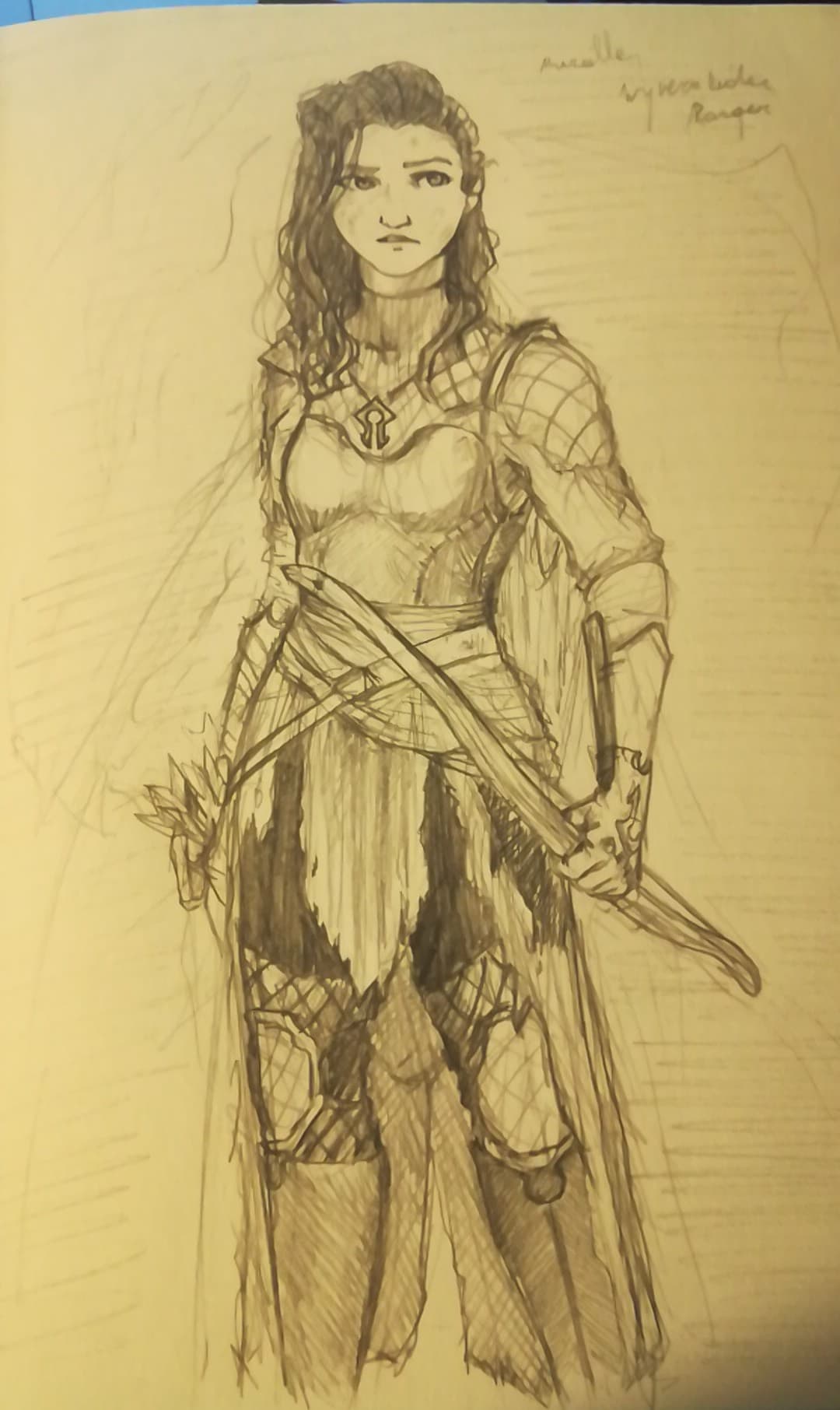 Dungeoneer's Pack
Includes a backpack, -a crowbar,- a hammer, -5 pitons, -10 torches, -a tinderbox, -10 days of rations,- and a waterskin.- The pack also has 50 feet of hempen rope strapped to the side of it. -ball bearings - flask of oil (5) - grapling hook - spyglass - soap
Equipment
-Sharpshooter
Features & Traits

Beginning at 1st level, you have significant experience studying, tracking, hunting, and even talking to a certain type of enemy commonly encountered in the wilds. Choose a type of favored enemy: beasts, fey, humanoids, monstrosities, or undead. You gain a +2 bonus to damage rolls with weapon attacks against creatures of the chosen type. Additionally, you have advantage on Wisdom (Survival) checks to track your favored enemies, as well as on Intelligence checks to recall information about them. When you gain this feature, you also learn one language of your choice, typically one spoken by your favored enemy or creatures associated with it. However, you are free to pick any language you wish to learn.

At 2nd level, you adopt a particular   of fighting as your specialty. Choose one of the following options. You can’t take a Fighting Style option more than once, even if you later get to choose again.

You gain a +2 bonus to attack rolls you make with ranged weapons.

While you are wearing armor, you gain a +1 bonus to AC.

When you are wielding a melee weapon in one hand and no other weapons, you gain a +2 bonus to damage rolls with that weapon.

When you engage in two-weapon fighting, you can add your ability modifier to the damage of the second attack.

By the time you reach 2nd level, you have learned to use the magical essence of nature to cast spells, much as a druid does. See chapter 10 for the general rules of spellcasting and chapter 11 for the ranger spell list.

The Ranger table shows how many spell slots you have to cast your spells of 1st level and higher. To cast one of these spells, you must expend a slot of the spell’s level or higher. You regain all expended spell slots when you finish a long rest. For example, if you know the 1st-level spell animal friendship and have a 1st-level and a 2ndlevel spell slot available, you can cast animal friendship using either slot.

Beginning at 5th level, you can attack twice, instead of once, whenever you take the Attack action on your turn.

Beginning at 7th level, you and your wyvern form a more potent fighting team. When you use the Attack action on your turn, if your wyvern can see you, it can use its reaction to make a melee attack.

At 7th level, while your wyvern can see you, it has advantage on all saving throws.

Beginning at 8th level, you can use the Dash action as a bonus action on your turn.

Starting at 10th level, you can remain perfectly still for long periods of time to set up ambushes.
When you attempt to hide on your turn, you can opt to not move on that turn. If you avoid moving, creatures that attempt to detect you take a −10 penalty to their Wisdom (Perception) checks until the start of your next turn. You lose this benefit if you move or fall prone, either voluntarily or because of some external effect. You are still automatically detected if any effect or action causes you to no longer be hidden.
If you are still hidden on your next turn, you can continue to remain motionless and gain this benefit until you are detected.

Storm of Claws and Fangs

At 11th level, your wyvern regains his breath attack on a 5 or 6 roll.

You have mastered ranged weapons and can make shots that others find impossible. You gain the following benefits: 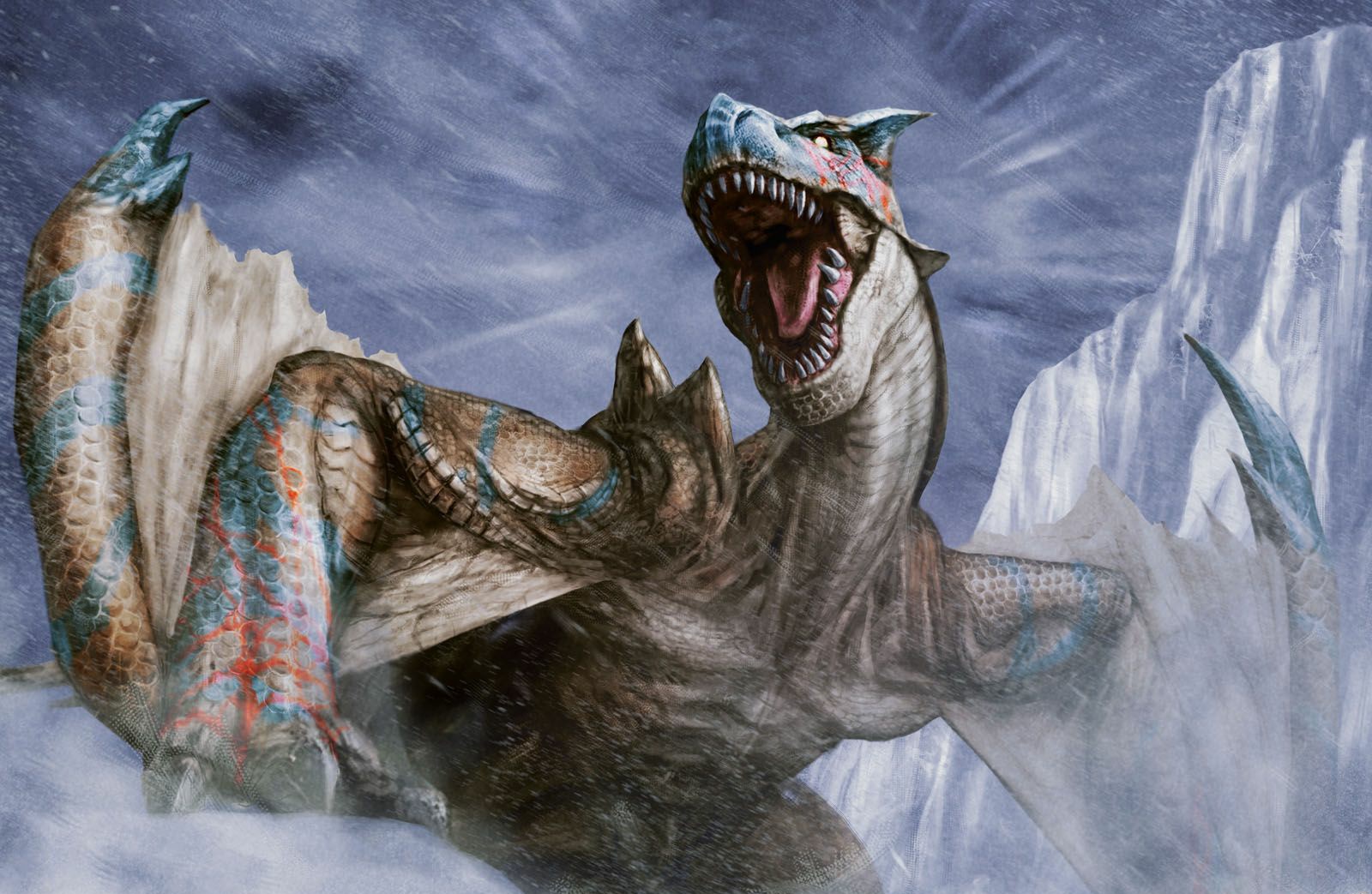 Protector aasimar are charged by the powers of good to guard the weak, to strike at evil wherever it arises, and to stand vigilant against the darkness. From a young age, a protector aasimar receives advice and directives that urge to stand against evil.   Age Aasimar mature at the same rate as humans, but they can live up to 160 years.   Alignment Imbued with celestial power, most aasimar are good. Outcast aasimar are most often neutral or even evil.   Size Aasimar have the same range of height and weight as humans.   Darkvision Blessed with a radiant soul, your vision can easily cut through darkness. You can see in dim light within 60 feet of you as if it were bright light, and in darkness as if it were dim light. You can’t discern color in darkness, only shades of gray.   Celestial Resistance You have resistance to necrotic damage and radiant damage.   Healing Hands As an action, you can touch a creature and cause it to regain a number of hit points equal to your level. Once you use this trait, you can’t use it again until you finish a long rest.   Light Bearer You know the light cantrip. Charisma is your spellcasting ability for it.   Radiant Soul Starting at 3rd level, you can use your action to unleash the divine energy within yourself, causing your eyes to glimmer and two luminous, incorporeal wings to sprout from your back.   Your transformation lasts for 1 minute or until you end it as a bonus action. During it, you have a flying speed of 30 feet, and once on each of your turns, you can deal extra radiant damage to one target when you deal damage to it with an attack or a spell. The extra radiant damage equals your level.   Once you use this trait, you can’t use it again until you finish a long rest.

Languages. You can speak, read, and write Common and Celestial.

The major events and journals in Mireille's history, from the beginning to today.

The list of amazing people following the adventures of Mireille.