Grumpy old (35) dwarf hacker and owner of video arcade in the basement of the Blake.

Campaign Page
Run by ArtemisAlpha
Played by
Socrates
Other characters

Grumpy old (35) dwarf hacker and owner of video arcade in the basement of the Blake.

Everyone knows him as Trapdoor. The superintendent of the Blake in Englewood, he also runs a video arcade in the basement. Giving the children of the neighborhood free access in return for their help being gang informants. Nothing happens on the streets without Trapdoor getting a vibration on his web.
Age
35
Gender
Male
Eyes
Silver-Blue
Hair
Golden
Skin Tone/Pigmentation
Fair
Height
4' 8"
Weight
200 lbs.

Data Jack, Headjack with his commlink, and Dynamic Handprints

Rather than letting his beard grow long, he keeps a well trimmed goatee. 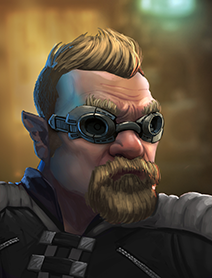 The major events and journals in Fognol's history, from the beginning to today.

The list of amazing people following the adventures of Fognol.

Other Characters by Socrates