Eyes in the Night 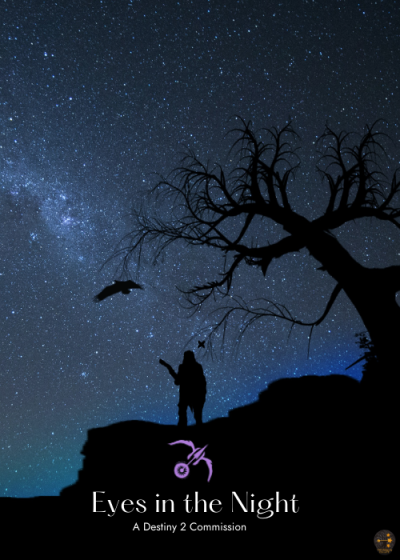 I.
Roots of the Yirim
Completed 1552 Words

A Hunter sat in the back corner of an old bar, spinning an empty casing with one hand while drinking with the other. For most, it was just another day of business. People were busy restocking or refueling, one or two local regulars stopping by with nothing on their minds except the passing of a few hours of drink between shift and sleep. And they all would eventually be on their way. Even though this appeared to be the usual day-to-day of this settlement, she took note of each detail, aware of one particular mystery. They seemed very comfortable for people this far away from the City. The door creaked, tearing her away from her observation. A stranger stepped in.

He was a Vanguard agent. Green as the new tangle that gathered all over the outskirts unchecked. She could tell. He hadn't noticed her yet.

He stepped back from the sound of her voice, startled.

"Uh, yes." He hurriedly stepped up closer, eager to dispel the uncertainty. "How could you tell?"

"Please. I can count the number of times you've already given yourself away. Go back home. And tell them I'm not taking the Dare."

"The what? Right, the Dare." He took a moment to ponder. "That's not what I'm here to do. Different assignment. Tracking missing in action Guardians."

"Not missing." she corrected him.

She slid over a datapad. The agent picked it up for his Ghost to scan it.

"Mistake one. Don't flash your Light out for everyone to see."

He took a step back, uncomfortable in his lack of experience. The Ghost beeped and blinked curiously at the Hunter before fading away to register the information.

"The locals name him Azrael." She spoke up after he received the report. "Old Earth theology. Something about ever-watchful eyes. I had heard some things going on in the area that didn't match up and decided to do a little recon. All's good in these parts."

"Are we not going to go look for him?"

"You are new. He's doing the job. If the Guardian wanted to be found, he'd be here."

"You won't. The point is, you're wasting time. Go back to the Tower and play some Crucible."

The agent breathed in quickly and shook off the disregard.

"Things are changing if you haven't heard. After the Factions all took off after their failed coup, the City's overtasked. We're going to need all the help we can get."

"I told you. If the Guardian wants to be found, he'll be there." The Hunter replied, looking at her cup instead of the agent.

"I don't think the commander's going to take to that lightly."

"Doesn't matter. No Hunter Vanguard, so we're out here on our own terms, keeping tight the lines to the City. Don't matter if it's on a report or not. It's getting done."

The door to the bar flung open as a local worker spun frantically, searching. His eyes pinned directly on the Vanguard agent. The look said everything.

"How does everyone know I'm from the Tower?"

A few months short of his thirteenth birthday meant Carlo had the challenge to find something useful in the junk to bring back. He couldn't find anything but refused to return with nothing, so he pressed on, paying less and less attention to how far he was going. Noticing the day getting dimmer, he turned back, upset.

After a moment, Carlo swore he had seen that tree at least three times in his wraparound of the small forested area he wandered within. Admitting he was lost was the last thing on his mind, but as the sun started to crest on the horizon, there was a definite chance this would be the case. He wasn't the type to give up, so he pushed deeper into the wood, hoping that some familiar landmark would present itself to him and then give him the means to return home.

The further he went, the less the forest's features he recognized. And then he stopped. For in the distracted mind to discover his location, he had wandered directly into a Fallen campground. Their heads turned in the direction of his approach, and as soon as he understood what he was looking at, Carlo ran the opposite way as fast as he could.

The sounds of crunching vegetation that multiplied informed Carlo they were in pursuit. Still, he refused to look back as hard as he wanted to. He needed to put as much distance as he could, and even though it hurt to breathe, he dared not stop. The tangled underbrush continued to get into his way until he could no longer progress forward effectively. The forest itself had become like a trap. He could hear their chittering grow louder, and he frantically dug at the branches and weeds, hoping to clear as much as he needed to get through.

Their chittering drowned out his senses until the call of a hawk forced Carlo to turn around and finally confront his pursuers, yelling as loud as he could in panic. He couldn't count how many Fallen were heading straight for him, and he couldn't get out of the thick brush away from them all. He kept yelling, desperate for anything to happen and change what felt inevitable. He heard the hawk's plaintive cry again, which caused his pursuers to turn and look this time.

The dusk erupted with a brilliant flash as a bow took shape directly under the hawk's wings. An aggregation of eye-like forms was visible for a split moment in gathering smoke, seen due to the emerging recurve launching a pinpoint of violet directly in the center of the pack of raiders.

Despite the young man could see it, trying to understand what he was witnessing was the problem. All he could recognize first was the shrieking that issued forth before complete silence, as the energy seemed to leech sound itself. Then the strange pull, the compulsion from the glowing sphere built from the arrow, embedding itself into the sense of everything.

And then the bow fired again, and another indention into reality took place, and once more. Eventually, an entire lattice of chaining distortions struck the Fallen. It slowed their movements, their attempts to retreat impossible against the demands of the force that lit the fading day as brilliant as stars.

Every hunting party member fell to the ground and obeyed the demand of the lashing energy that tethered them all into a tight group. After a burst of violent movement, there was nothing, their forms surrendering to the grip of potency that melded space itself into one singular shape.

As if nothing dangerous had taken place, stillness filled the clearing, the world righting itself after being changed ever slightly. Eventually, the evening began with its usual cacophony of croaks and chirps. A sharp, piercing echo caught Carlo's attention, and he turned to see the hawk perched directly in front of him, turned in the direction of a coincidentally available opening through the underbrush. It took flight and glided through the space, beckoning the boy forward.

He turned to see if the one using the bow was there, but he could see nothing. He had heard stories of the monstrous protector of these woods. A silent individual who hunted in the wilds and kept the locals safe with abilities that defy the very laws of reality. This creature in legend was described as having many eyes and was one of the most respected. He remembered the name hushed with deep respect.

"Azrael." he uttered between breaths

The Vanguard agent rushed into a clearing after hearing the telltale sound of Light manifesting. He arrived, only to find nothing but a surprised young child, precise scarring on the ground, and a hawk that took off once he approached.

He could sense it, the force of the Traveler rewriting fundamental rules. The air was thin, barely present, and all collected in a central point - telltale signs of Void Light.

"Told you the job's getting done." The Hunter followed behind casually, unsurprised at the results.

The Vanguard agent frowned as he checked for any signs of hostiles still present. The Ghost chimed that the area was clear, and the only signs of life were the two Lightbearers and the child.

"I still think that they'd do better if they'd report to the Tower and help us out."

"And you're still new. Trust me. Everything's alright here."

"Look, I'll be honest. I don't have much experience working with Nightstalkers, but from what I know, it's best to let those types of Hunters do their work with minimal obstructions."

The Vanguard agent groaned, still disagreeable, but the setting told him all he needed to know. If the Guardian was out here, he was already gone. The threat had long passed.

"I suppose at least knowing there's still eyes out here watching over these people is good enough."

"That's the spirit! Now you're starting to get it." The Hunter cheered for him.

The Vanguard agent grunted and looked into the woods, wondering if the Guardian who eluded them was somehow aware of their presence.

Login & give some love! Tweet
This written piece is a commission from https://www.twitch.tv/jigsawpiecez of his Destiny 2 Hunter Nightstalker! You can see my offerings on my Ko-fi page if you are interested in using my writing for your work!
Character concept belongs to him, world concept and design belong to Bungie.
The manuscript cover image is a combination of tools from Canva, Unsplash, and a screenshot from Destiny 2
Photo Credit: https://unsplash.com/photos/KRVmB7wraZ4
Check out Canva: https://pillar.io/the_essalim/canva