Salcondoran is one of the three Gods created by the Mana Anomaly. Born from mana's aspects of Creation, Salcondoran serves as the embodiment of Negentropy. Apathetic and somewhat nihilistic, it only desired to create as they saw fit. Though eventually, it grew bored of their role as Creator and formed other entities to reign over specific aspects of the universe in their place, the Primals.

While Salcondoran was the progenitor of the universe, that didn't necessarily mean they cared about it. While at first displaying some compassion in its role, they would eventually grow cruel and somewhat malicious. Realising that in the end, nothing it made would last anyway, they stopped caring about the fates of their creations. Often times, it would even create life with the sole purpose of seeing how it would eventually perish.

Salcondoran and Solar Pyre had once been very close, and had even gotten married by Valian standards. However, after the change in Salcondoran's mentality, and realising what Salcondoran had become, Solar Pyre lost her love for them. This eventually led to Solar Pyre leaving Salcondoran, and as punishment, it created an incomprehensibly hot star to scorch and scar her face. As well this, they cursed her so that not only would this wound never heal and her power and form would be limited, but she would also always regret leaving him.   After this, it isolated itself in Heaven, where they would become inactive and remain for the rest of time. It still missed Solar Pyre, and had even attempted to recreate her, though quickly realized they wouldn't be able to, and would never be satisfied without Solar Pyre herself, anyways. Instead, they made a deal with the Grand Arcane, where in exchange for existential knowledge, Salcondoran would receive fragments of its physical form. They then would perform a ritual to imbue souls into these fragments, creating what would come to be known as the Enta. These entities were forged in the image of Solar Pyre, and were to keep Salcondoran company in Heaven. This wasn't their only purpose, though, as they also served to act in the interest of Salcondoran, and perform tasks as it so desired and ordered. For the most part, they viewed Salcondoran as their father, and were generally completely loyal and subservient to it.

Salcondoran resembles a hexapedal yellow deer of varying and often very large size. It possesses thick yellow eyebrows, as well as a thick white mane and tail. Golden ichor, roughly in the shape of antlers, flows from its head in place of where antlers would be expected to be. Salcondoran has no mouth, though is able to form one if and when it desires to.

The ability to create whatever it pleases, with no drawbacks or limitations. Salcondoran creates without following the laws of thermodynamics. 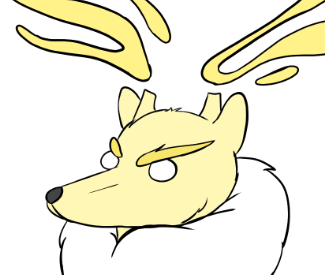