Give me a handful of Legionaries and I'll give you a victory.
— Sextus Manlius Catonius, Centuion XIth Legion

In the Empire there is no more a prestigious position than that of Legionary. Everyone from the Legatus down to the standard rank and file Legionary is proud to carry that title, the Imperials know that to hold that title means years of training from childhood, discipline, professionalism and the ability to practically wage war across the lands.   A Legionary on his own is a formidable opponent, a Contubernium of Legionaries is nigh on unstoppable.They are armed with some of the most advanced weaponry in the entire Empire and are armoured in overlapping layers of segmented plate, topped of with a nigh unbreakable tower shield.   The sight of Legionaries on the field is always breathtaking, these consummate professionals have studied war from a young age and prosecute it with maximum effectiveness.

In order to qualify to join the Legionaries you must be the son of a family of full Imperial citizens, you will leave your parents at age 10 and undergo intense psychological and physical training and at age 18 you become a full fledged Legionary.

All legionaries are paid a basic rate of 225 denarii a year which is a comfortable enough wage for legionaries to live on. However like all militaries they are subject to stoppages, money is deducted for food, uniforms, hay and other sundries. 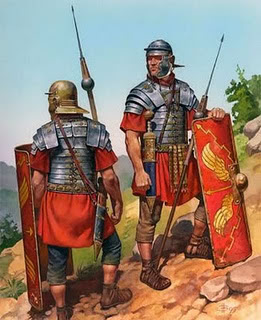 I really like the cover image! You had a really cool table under Career Progression when I first opened the article, which I really liked because it was an effective and visually appealing way to present the information. I'm assuming you're still fiddling around with section because there's an unfinished sentence there as well. I really like the article though! It's pretty sad that to be one of the most elite soldiers, you have to leave your family so young, but I guess that's the price of years and years of training.

I like how well this article plays into the setting of the world and how it details the indoctrination into military service, and the parallels to historical and modern military practices.

sounds like an intense position to have! clear explanation of its purpose in your world and why it is considered 'prestigious'.

That starting quote really sets the mood for the whole article. Love it Gorge.