"'Why are packing twice the provisions we need for the trip?' We're passing directly through Kana'khi territory and we'll be lucky to get to the other side with half that. The Kana'khi always take their share. A man always packs extra. Just be glad they're after goods and not your damn face, solider."   -Commander Dahn, Saldorian Special Forces 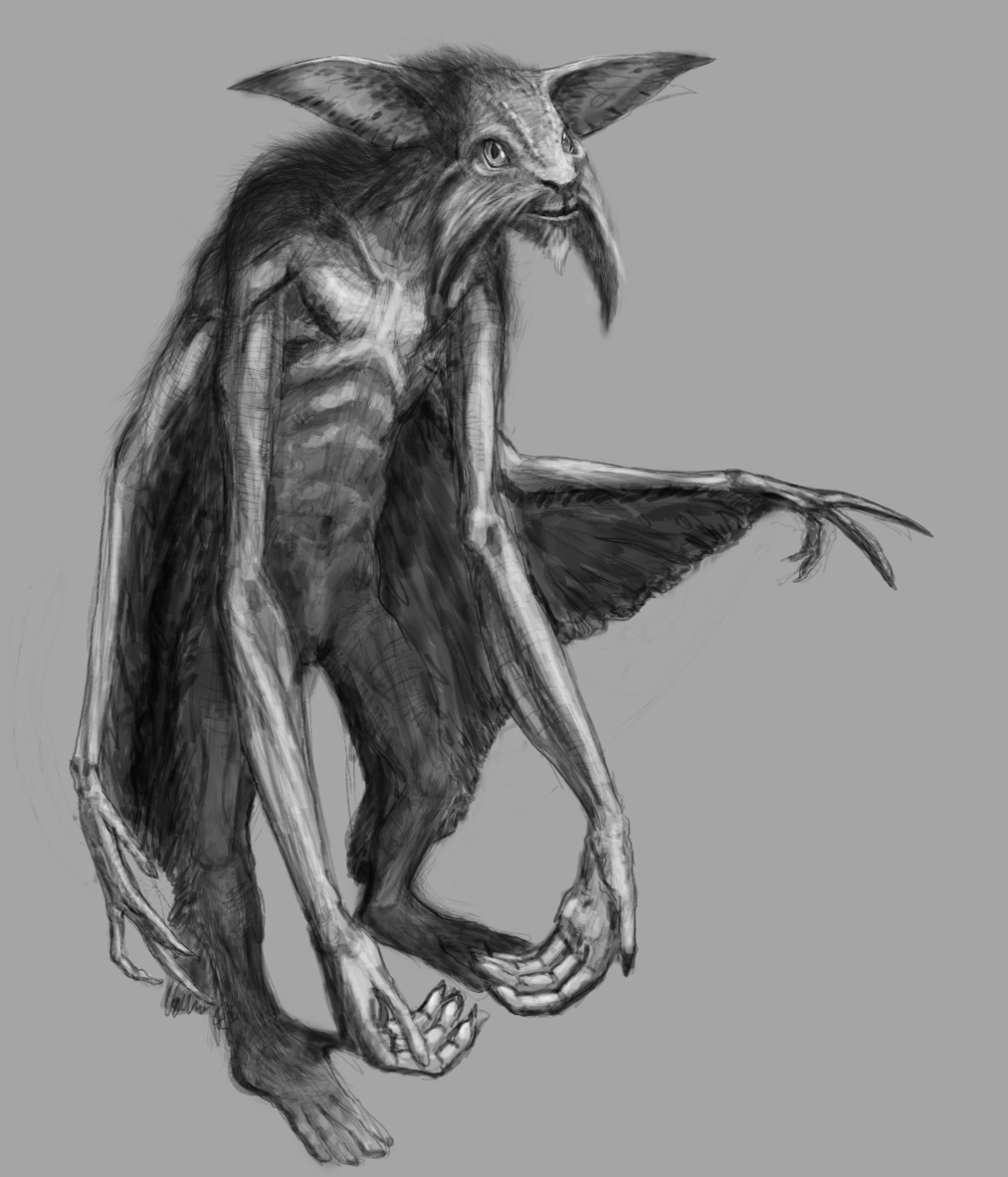 Forest-dwelling goblins are mainly arboreal, spending much of their lives aloft in the branches. As such, their forelimbs are far more robust and developed than their hind limbs, as climbing and swinging are the primary modes of transportation among the trees.   Webbing connects the forelimbs and ankles, enabling limited gliding ability at heights. This webbing is fragile, just a loose band of skin, and is thus easily damaged. Injured goblins will often patch these wing flaps with various natural elements (animal skins, leaves, etc.)   Fingers and toes are long, multi-jointed, and possess sticky pads along their underside. All for the benefit of gripping.

Omnivorous, though much of the ‘meat’ they consume is insect-based. The rest of their diet is composed of plants and neighboring fungi that grow at various levels of the treeline, light-depending.

Although viewed as little more than animals, in actuality the forest goblins are capable of complex problem-solving and engineering capabilities. Despite not having explored the art of combustion-based energy, they’ve observed the elastic properties of the surrounding vines and branches, and thus have an appreciation of the ability of such materials to store and release kinetic energy. Makes sense when you’re a climber. Unbeknownst to the common man, be it via secrecracy or simply ignorance, the forest goblins are capable of constructing rope-and-pulley systems and similar means of engineering (catapults, elevators, etc.). Much of these machines appear to be little more than a collection of sticks on the surface, which is intentionally. It’s not until you see one spring to jittery life that you realize it’s all an elaborate form of camouflage. The goblins enjoy their secrecy, fully-aware of their perception as little more than capable beasts. Their language in based more in body-movement than speech, so intense debates between goblins are typically seen as little more than posturing displays by the general populis.

Forest goblins have large eyes, capable of incredible eyesight, even in low-light conditions.

Lifespan
60 years
Average Height
4 feet
Average Weight
80 lbs
Average Physique
The upper body is typically more robust than the lower, as the vast majority of their locomotion is done via swinging/climbing among the branches. Many of them are clumsy on foot. Walking on the ground is as unnatural for them as swimming is for us. We can do it, yes, but we’re certainly not adapted to do so when compared to our normal mode of locomotion. Same goes for the goblins.