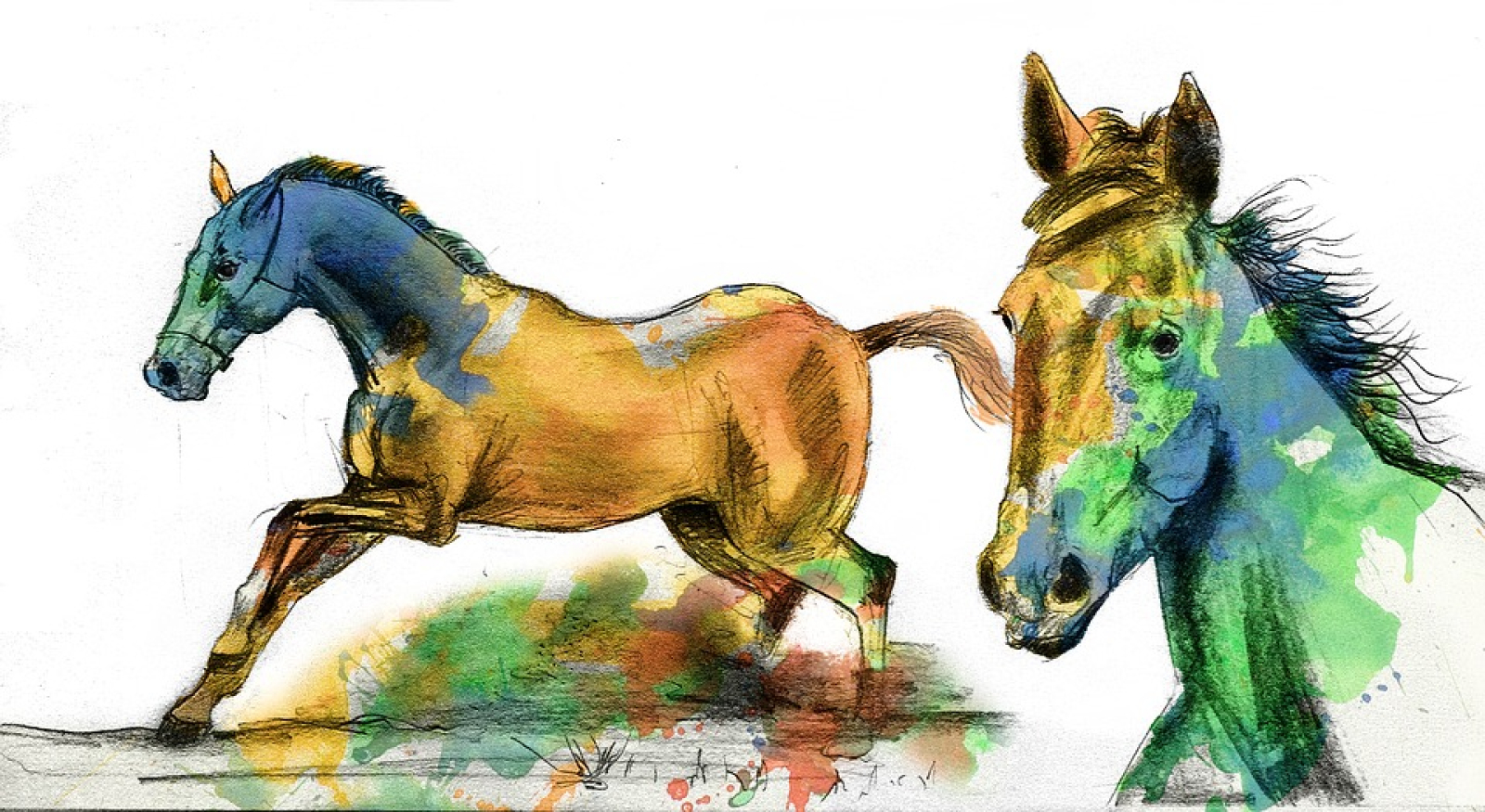 Equines with minor illusion magic, who appear in all colours of the rainbow

Blackjack and the Starsinger were already waiting for them in the field by the time that they showed up. The fey-horses were standing in a parti-coloured line, fixing them all with an accusatory glare.   “Hurry up,” urged Blackjack. “I think the horses are worried that I’m crushing their primroses.” The expressions of the horses did not change any as Shaundar and Yathar clambered up the gangway.
— A Few Good Elves by Diane Morrison

Fey-horses are a species of equine that are closely related to the more commonly-known domesticated horses that are found in Human settlements. However, they tend to fill that niche in Elven settlements instead. Like the domesticated equine of the humans, they come in a variety of breeds suited to differing tasks. These breeds are similar, but not identical to, the "human" equine breeds, since elves exercise less direct control over the breeding of their horses.   Fey-horses are immediately identified by their brightly-coloured coats, manes and tails. Unlike their equine cousins, fey-horses are found in all the colours of the rainbow.   Perhaps because they have such bright colouration, fey-horses have some unique abilities that they may use to defend themselves. They can levitate for short distances, make themselves invisible as long as they stand perfectly still, and cast minor illusions to distract predators or conceal themselves. These abilities are consciously evoked, but fey-horses, like other equines, are easily startled, and may evoke them when it is not strictly necessary.

Fey-horses, aside from their temperament and their spectacular colouration, are otherwise typical equines, with four legs, hooves, an elongated skull structure, and blunt teeth designed for chewing and foraging vegetable matter.

The fey-horse is a domesticated hoofed mammal. Elves domesticated the fey-horse millennia ago, and have taken them to every world on which they have chosen to make their homes.   Fey-horses are adapted to run, allowing them to quickly escape predators. They also have an excellent sense of balance and a strong fight-or-flight response. Like other horses, fey-horses are able to sleep both standing up and lying down. Younger horses sleep significantly more than adults.   Female horses, called mares, carry their young for approximately a year, and a young horse, called a foal, can stand and run shortly following birth.   Fey-horses reach full adult development by age five, and have an average lifespan of between 50 and 75 years. Note that their gestation period is slightly longer, and their lifespans significantly longer, than that of their horse cousins.   Fey-horse breeds are loosely divided into three categories based on temperament: spirited "fire-spirits" with speed and endurance; "earth-spirits", such as draft horses and some ponies, suitable for slow, heavy work; and "water-spirits", often developed for specific riding purposes. There are numerous breeds of fey-horse, numbering in the hundreds.   There is an extensive, specialized vocabulary used to describe equine-related concepts, covering everything from anatomy to life stages, size, colours, markings, breeds, locomotion, and behaviour.

The following terminology is used to describe fey-horses of various life stages:

A fey-horse of either sex less than a standard year old. A nursing foal is sometimes called a suckling, and a foal that has been weaned is known as a weanling. Most domesticated foals are weaned at five to seven months of age, although foals can be weaned at four months.

A fey-horse of either sex that is between one and two standard years old.

A male fey-horse under the age of five.

A female fey-horse under the age of five.

A male fey-horse five standard years old and older.   Note that there is no such thing as a fey-horse gelding, as fey-horses are never castrated.

Fey-horses evolved in lush, colourful savannahs and sparse forests on Avalon. It is thought that they lived among brightly-coloured plants, and this explains their spectacular colouration. Others believe that living in such a magic-rich environment created the colouration as a side effect. Still others suggest that this colouration was the result of a long process of elves managing their breeding.

Fey-horses, like most equines, are herbivores with a digestive system adapted to a forage diet of grasses and other plant material, consumed steadily throughout the day. Fey-horses are not ruminants, but they can utilize cellulose, a major component of grass. They prefer flowers and sweet fruits and vegetables to all other plants.   A 450-kg (990 lb) fey-horse eats 7 to 11 kilograms (15 to 24 lbs) of food per day and drinks 38 to 45 litres (8.4 to 9.9 imperial gallons; 10 to 12 US gallons) of water.   Fey-horses cannot vomit, so digestion problems can quickly cause colic, a leading cause of death, and they do not have a gallbladder, but seem to be able to tolerate a large fat content in their diets anyway.

Fey-horses and elves have existed in a symbiotic relationship for centuries, and the smaller breeds are employed in similar ways among Gnomes, too. The equines are used for travel, farming, and carrying. Competitive sports have developed involving the use of fey-horses. They are also used in public safety work, mining, entertainment, therapy and warfare.   In return, elves and gnomes provide domesticated fey-horses with food, water, and shelter, and attention from specialists such as veterinarians and farriers.   Most domesticated fey-horses begin training under a saddle or in a harness between the ages of two and four, and by full adulthood, are ready to accept the work intended for them, often with obvious enjoyment. Fey-horses will never accept a bit and bridle, nor blinders, and will actively resist and defy anyone who tries to use such tools of force with them. Whipping them will earn the same constellation of responses that any sentient being might display. Elves and gnomes who wish to work with fey-horses use only a hackamore and a gentle hand.

Elves and gnomes derive many products from fey-horses, including meat, milk, hide, hair, bone, and pharmaceuticals extracted from the urine of pregnant mares.

Fey-horses are more intelligent than dogs, but not as intelligent as Goblin Vargar. They cannot be "broken" as their horse cousins often are, but instead, their trust must be individually earned. They have been known to make decisions based on complex reasoning, and fey-horse herds often have their own symbolic body language and a simple "code" built from the illusions they create (such as specific patterns of will-o-wisps or flashing lights.) They have even been known to collect ribbons and bows, and drape them in trees, or to arrange rocks and sand, or tread particular patterns in the ground, in what can only be described as artistic expression.

Fey-horses, like all equines, have widely-spaced eyes and ears, allowing them to survey the broad range of their environment to spot predators. 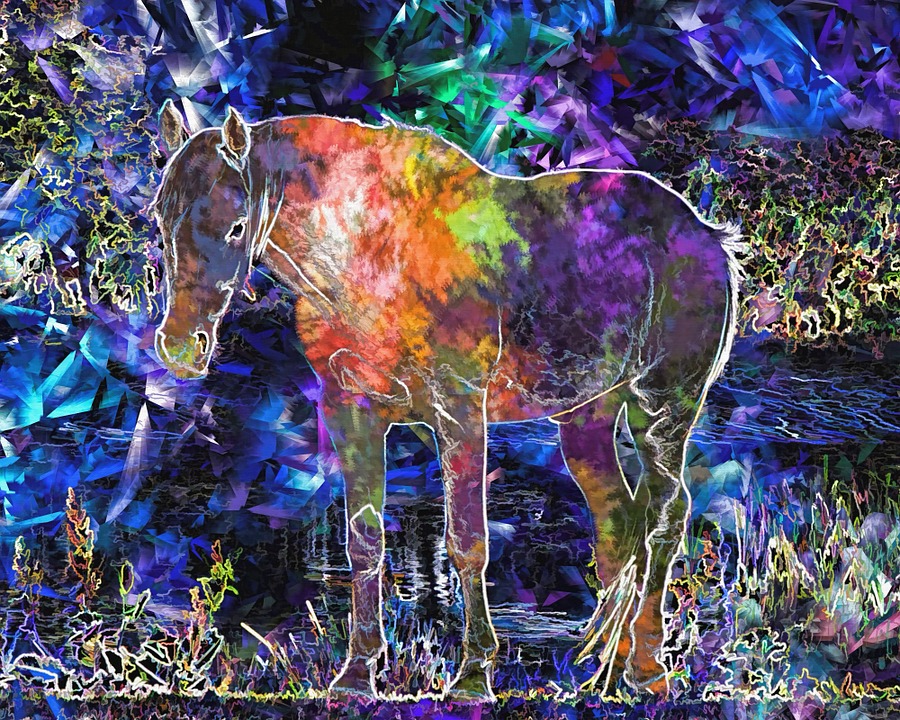 Rainbow Paint Fey-Horse by Natureworks
Scientific Name
Equus fugatur
Lifespan
50-75 years
Conservation Status
Fey-horses are common in older elven communities, and rare in "newer" elven settlements (settled within a few hundred years)
Average Height
The height of equines is often expressed in terms of "hands" (a unit of measurement equivalent to about 4 inches or 10 cm) and inches. Fey-horses range from 14 to 18 hands, and fey-ponies are less than 14 hands, at the withers. There is little appreciable difference between fey-horses and fey-ponies other than height and some elements of build.
Average Weight
380 to 1000 kg (840 to 2200 lbs)
Body Tint, Colouring and Marking
The fey-horse can be found in a staggering variety of spectacular colours. Variations might show similar patterns to those human horse breeders might describe as "bay," "dappled," "palomino," "piebald," and so forth, except that the variations in colour are bright, like those of the rainbow. Fetlocks, in breeds that have them, may be the same shade as the foreleg coat, or may form a dramatic contrast. There are also colour patterns that are unique to the fey-horse (see below).
Geographic Distribution
Related Ethnicities 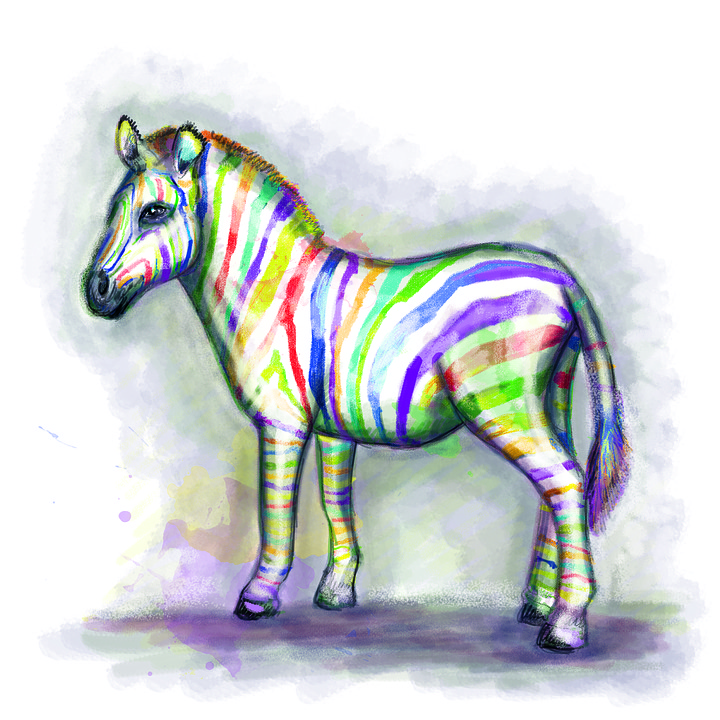 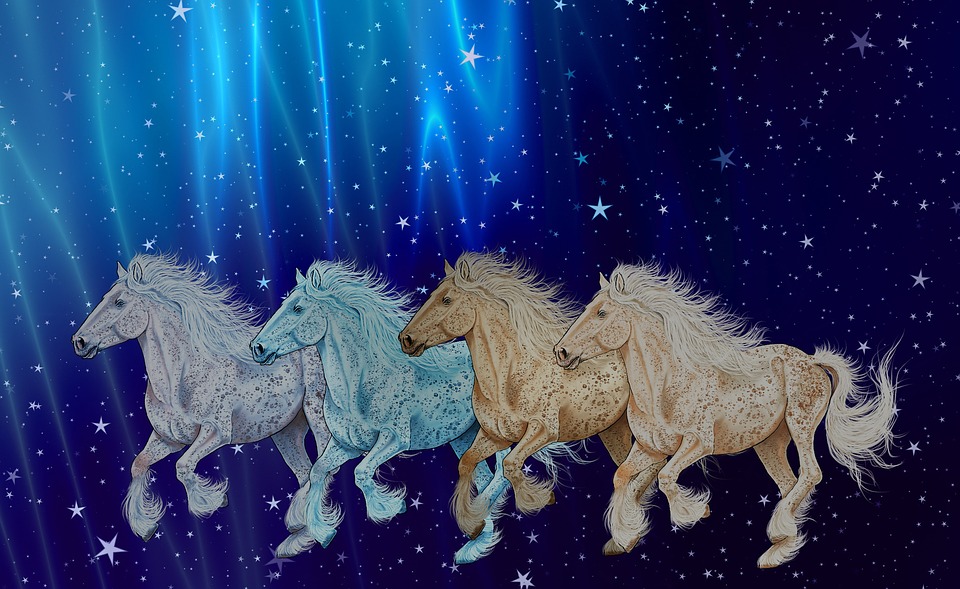 Answering: "a species of working animal"
Visit SableAradia's Competition Page Check all other answers to this prompt Competition Homepage

~ Thank you for your support! ~
If you couldn't tell by the elves, orcs, and magic flying sailing ships in space, this is a work of fiction. Any resemblance to people or locations, living or historical, is purely coincidental, with the exception of Alberdingk Onestone, who may actually be an alternate dimension's version of a famous scientist, only as a gnome.
The Toy Soldier Saga is copyright (c) 1995 by Diane Morrison. All rights reserved.
Cover image: Painted Bays by Lasbach
Article template
Species
World
Toy Soldier Saga
Category
SummerCamp
Author
SableAradia
Publication Date
6 Jul, 2021
Creation Date
5 Jul, 2021
Last Update Date
10 Jul, 2021
Visibility
Public
Views
382
Favorites
10
Comments
2
Work In Progress
Tags
fey-horse fay-horse fey horse faeries horse elven horse

Oh love the colouration of these horses! Also like the breeds getting names like 'fire-spirits'. Great article!

I love the way you've twisted these from regular human horses and made them unique, both in the relationship the elves have with them and in their make up. I like the idea that the trust has to be earned individually. The colour combinations are wonderful, too! <3