The High King or Queen of Elvenkind

The Arcorael "High Monarch of Legend" is the ruler of the Avalonian Empire. Colloquially referred to as the "High King/Queen of the Elves," they hold the Mandate of Avalon, which is the now-legendary homeworld of elvenkind. This mandate is indicated by the acceptance of the Crown of the Stars or, for the Royal Consort (referred to as the Arcoraela ,) the Crown of the Earth, which is said to kill any unworthy person who dares to wear it. Unfortunately, due to a series of civil conflicts among Elf-kind, the Crowns have been lost. As a result, while there is a presumptive heir to the Celestial Throne, there is no one who can currently claim the title of Arcorael. 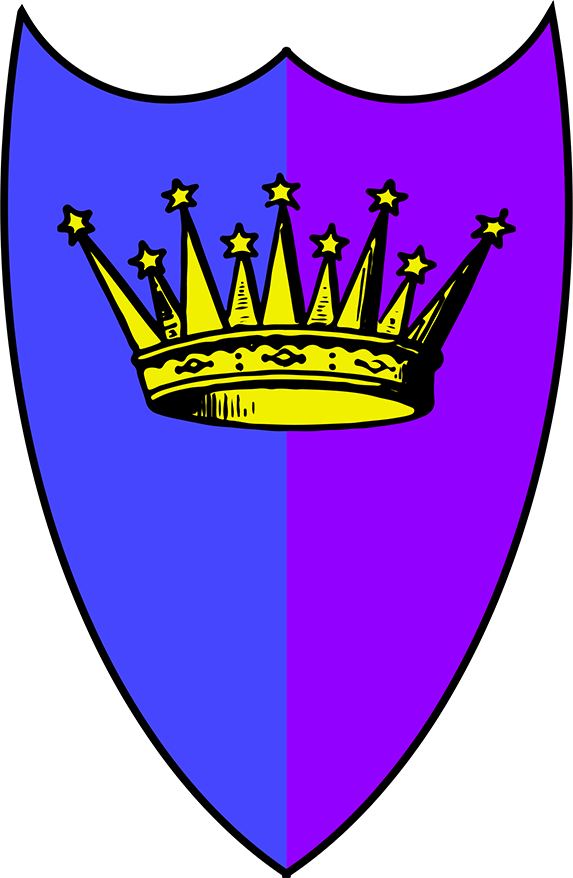 Arcorael's Crest
No one is entirely sure what criteria the Crown of the Stars uses to judge whether or not a would-be heir is "worthy." It appears to require a combination of natural leadership ability, an internal code of honour, and compassion balanced with the ability to make hard decisions when necessary. Most of the Avalonian Monarchs have been much loved, or at least highly respected.   However, this by no means suggests that they were perfect. In part, the Succession Wars were the result of the Imperial Crown being out of touch with the needs of common elves. Sidhe, Nunnehi, and Svartalfar in particular felt that their concerns were being neglected and ignored by the Crown, and Nymphs and Sylphs felt entirely alienated and disconnected. Class divides that were enhanced by ethnic divides broke into open hostility, and repeated cycles of fighting and conquest that lasted for centuries. At last, the Crowns disappeared, and the Avalonian Empire remained without a head. This is the current state of affairs, and over the thousand or so years since the Crowns vanished, the Empire has become increasingly fragmented. The Avalonian Imperial Navy keeps on keeping on, but even its apparently monolithic structure has begun to fall apart.

An Elf who would wear the Crown of the Stars must be a direct descendant of the House Celestis, who were the first family given the Divine Mandate. Therefore, it is assumed that the would-be High Monarch must also be an elf. Whether or not a Half-Elf could wear the Crown is a matter of spirited debate among scholars.

The reigning Arcorael usually selected one of their children for the first opportunity to attempt to assume the Celestial Throne. Usually this was their eldest child, but not always. The heir was allowed to refuse -- and many did, fearing the verdict of the Crown and its subsequent effects. There was no dishonour in refusing.   If the presumptive heir refused, or was rejected by the Crown, another of the Arcorael's children was chosen to make the attempt. Lacking any direct (willing) heirs, the Arcorael occasionally selected a willing heir from among their immediate relatives.
Show spoiler
There is no reason to assume that direct descent from the most recent Monarch is necessary. Anyone descended from the Celestis line should be able to wear the Crown, provided they meet the moral and ethical requirements that the Crown itself demands.

The Arcorael was seen as the embodiment of the strength and the character of the Avalonian Empire . They inspired their subjects and represented them in negotiations with other nations. They rallied the far-flung nations of the Avalonian Empire to combine their efforts in matters that benefited everyone in the Empire; from the Avalonian Imperial Navy, to trade, to the Post, to the Merchant Marine. Above all, they protected and preserved their subjects, and they held the Empire together.
Show spoiler
The Arcorael is also responsible for the health and well-being of any Tree of Life (Starseed) within the Empire's star-systems; a power that is linked intrinsically to the Crown of the Stars and the Crown of the Earth. In the absence of an Arcorael, the Trees of Life are dying.

Far from a figurehead, the Arcorael was directly responsible for significant aspects of government. Their primary responsibilities were diplomatic; resolving differences between the Empire's member-nations, allocating resources to where they were most needed among the stars, and raising both money and resources to fund these enormous projects that spanned star-systems. These duties have been assumed by the High Admiral of the Avalonian Imperial Navy in the absence of a High Monarch, and the Admiral's ability to preserve the Empire wanes a little more with every passing year.

The Arcorael has absolute authority within the bounds of the Avalonian Empire. Their personal assets include several palaces, vast hoards of riches and magical treasures, and, it is said, a library that would be the envy of Known Space -- provided, of course, that the lost homeworld Avalon could be found again.

The Arcorael could voluntarily abdicate at any time, though of course, this rarely if ever happened. There was also an organization that was designed to "remove" the High Monarch, should that become necessary. Known as the Baelcoraela, their very existence is a subject of debate -- and legend.

The Arcorael has achieved a semi-mythical status in the remnant nations of the Avalonian Empire, and especially in the Avalonian Imperial Navy. Since it has been more than a thousand years since anyone has taken the Celestial Throne, the belief that one day, an Arcorael will rise again has achieved the status of a prophecy as well as myth. It is said that the return of the Arcorael will herald a glorious age for the elven people, and the salvation of the Avalonian Empire, in a similar way that Earth tells tales of the return of King Arthur or Genghis Khan.
Show Spoiler
There was something about the elf’s name, though. The archaic use of the old tongue for his name… there was something significant about that. And it wasn’t just that it indicated the elf was a scion of one of the ancient lines of the lost Avalonian Empire’s nobility, either. There was something about the name itself that he ought to remember from his history studies.   It was later that night that Shaundar remembered it. “Khi’Marinae” was the name of the last ruling family of the Avalonian Empire.   If the legendary Crown of the Stars could ever be found, Selnaris Khi’Marinae would be High King.
--Brothers in Arms by Diane Morrison

Avalonian Imperial Navy Flag by Diane Morrison - ship by Aaron Siddall
Type
Nobility, Hereditary
Status
The Celestial Throne of the Arcorael remains vacant until the Crown of the Stars is found, although there is a presumptive heir
Form of Address
Your Divine Majesty
Alternative Naming
High King / High Queen of the Elves
Equates to
The Arcorael is the Emperor or Empress of the Avalonian Empire. The person who wears the Crown of the Stars is the highest ruler of a star empire. Only the High Chief of the Fomorian Empire holds a rank that in is in any way equivalent.
Source of Authority
The Elven People & the Divine Fiat of the Tuatha de Danaan, embodied in the Crown of the Stars
Length of Term
Life, although it is possible to abdicate or to "be removed"
First Holder
Alakorae Celestis
Past Holders
Related Locations
Related Organizations

Answering: "Write about a rank or title that represents order in your world."
Visit SableAradia's Competition Page Check all other answers to this prompt Competition Homepage

~ Thank you for your support! ~
If you couldn't tell by the elves, orcs, and magic flying sailing ships in space, this is a work of fiction. Any resemblance to people or locations, living or historical, is purely coincidental, with the exception of Alberdingk Onestone, who may actually be an alternate dimension's version of a famous scientist, only as a gnome.
The Toy Soldier Saga is copyright (c) 1995 by Diane Morrison. All rights reserved.
Cover image: Rank Cover by Verti
Article template
Rank/Title
World
Toy Soldier Saga
Category
Avalonian Empire
Author
SableAradia
Publication Date
13 Jul, 2020
Creation Date
12 Jul, 2020
Last Update Date
22 Mar, 2021
Visibility
Public
Views
305
Favorites
5
Comments
0
Work In Progress
Tags
Arcorael elves Avalon Avalonian-Empire monarchs