"I felt the familiar draining, as the Hollow Man held one of its strange tools to my head, twirling it like a fork, drawing out a steady stream of consciousness. I felt everything I had learned over the past month fade away. The exact weight of a cubic foot of cat hair. The sound a tree makes when you hit it with a copper bat. The average airspeed velocity of an unladen swallow. They all flowed out of my head, and the Hollow Man tipped the mass into an inkpot. It pulled out a sheaf of blank papers, no doubt to transcribe my miscellaneous thoughts into a stable vessel, and a small sack of coins. I pocketed my income for the month, and stood to leave, my head now considerably emptier than it had been when I woke up this morning."
— Diary of a penny-headful


'Penny-headful' is the colloquial name for the large workforce of freelance spies, investigators, explorers, researchers, professional daydreamers and other such jobs, who make their living by gathering up and selling information in bulk, providing the backbone of the thought-trade which spans across the entire world. Their profession's name comes from the rates which most charge for their services, at a penny per thought.

Most penny-headfuls spend their lives searching out the most obscure, most hidden tidbits of information, the thoughts and memories that no one before them has ever had (or has had any particular need to know). This is because no self-respecting thought-trader is going to pay for information that just about everyone knows. Additionally, unlike more known things, penny-headfuls can afford to lose that more obscure information, for a thought that has been Abstracted can never be had again, a memory never relived, a fact never relearned.   Allowing more common information to be Abstracted can be quite infuriating for the person left with a gap in their understanding. Still, some allow such things to be Abstracted for a truly pitiful price, because no doubt there is still a tiny market for such thoughts among the more uninformed, whose coffers far exceed their minds in size. Typically, whenever information is Abstracted from a penny-headful they still keep the memory of their Abstraction, but some of the more desperate ones end up selling that as well, resulting in quite a bit of frustration when they find a bit of information that they've already learned, and find themselves unable to recall it.

The Foundation of Knowledge

The life of a penny-headful may appear somewhat dreary, reminiscent of that of a rag-and-bone man or a mudlark, scrounging about for little valuables in a sea of muck, and for many that is true. It can be terribly boring, measuring the exact shoe size of a sea snail. However, penny-headfuls support the thought-trade, and without them it could not exist. After all, few are interesting in paying for information that just about everyone knows. Fun facts, odd statistics, silly ideas, and obscure secrets, these are the things that the thought-trade thrives off of, and are the very things penny-headfuls provide.   In addition their contribution to the thought-trade, penny-headfuls also contribute to society as a whole. Few things have worked as efficiently to advance science, technology, and general knowledge than penny-headfuls. Very often, minor breakthroughs are made, novel ideas generated. While individually small, such things build up over time, and eventually result in something truly wonderful. Ever heard of the Renaissance? Such breakthroughs and ideas are also far more profitable than ordinary 'penny-thoughts,' so penny-headfuls are encouraged to obtain and sell them. Though they are very much among the lowest of the low, society would no doubt still be stuck in the Dark Ages without the services of the penny-headfuls.

I love it! I'd like to know more about thought-trade :3 Maybe more use of links to other articles would make the world easier to navigate? 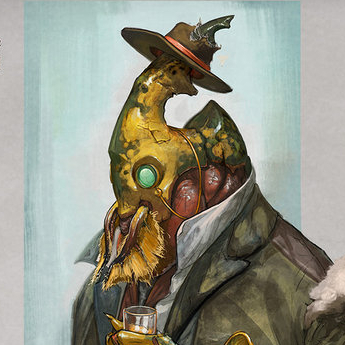 I'm going to be adding them at some point, when I have the time.

This is a very interesting concept! It made me quite curious about your world. I like your informative articles. Hope you don't mind if I featured you for January's challenge. I thoroughly enjoyed reading your work. <3