Regalia of the Pearl Guard

The armor of the Pearl Guard of Entari is a wondrous sight to behold.
The leather is studded with large sweetwater pearls, each representing a person of Entarian descent. Prior to the The Frostbitten War, every uniform only featured a few pearls which were placed over the heart. After the war, the pearls were taken from the uniforms of the fallen, enchanted by the Three Spires and placed as studs on the uniforms of the remaining Pearl Guard. To the people of Entari they serve as a constant reminder of those who made the ultimate sacrifice and those they left behind.


We carry those that we love close to our hearts.
Those that we lost protect us still, even after their passing.
Let their glimmer be a spark of hope in your hour of need.
— Adamor Morell

Uniformity. All divisions of the Pearl Guard wear the same basic uniform consisting of the studded leather armor, gloves and boots. The main difference in their attire is found in the accesories and their choice of weaponry.   Pearls. Entarian folklore speaks of a fey creature that lives in the depths of Lake Voronis, when a new Entarian is born, this fey creature comes to the city at night and blesses one of the pearls in the lakes 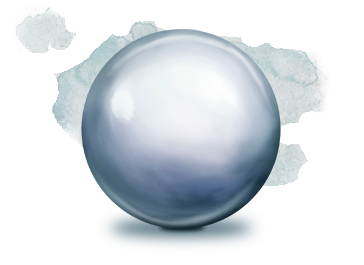 of the city. When an Entarian comes of age they retrieve one of these large pearls from the waters as a rite of passage. It has become a tradition to gift the pearl to a family member or loved one in the Pearl Guard. These gifted pearls are sown into the leather behind the central crest of the armor, close to the heart. Members of the Pearl Guard typically do not openly flaunt the amount of gifted pearls each of them have, instead they view them as a personal reminder of the people the pearls represent. The small pearls used in the hemming of the cloth and leather are cultivated by the Harvesters Circle in small ponds within the city.   Linen, Leather and Fur. The fabric used in the uniform is made from flax. The greenish blue Voronian Berry is used to color the linen in the typical Entarian blue. The berry is crushed into a pulp and soaked together with the linen in warm water for a week to produce the deep cyan tint. The leather and fur used for this armor comes from the northern escan goat. These goats are bred and raised as livestock by the Harvesters Circle and produce a very strong but supple leather. These materials are woven, sown and stitched together by the Silver Hand after which they are enchanted by the Three Spires.
Symbols and Patterns. The steel crest in the center of the chestpiece of the armor is embossed with the Entarian crest: The six sided snowflake encircled by a dragon. Each of the 6 sides represent the six guilds of Entari, of which now only five remain. The silver dragon resembles the protection of Entari through magic and frost. The cloth of the armor has a similar pattern of a dragon's body stiched on it and the hem features a geometrical pattern reminiscent of snowflakes which is also applied to weaponry.

Silver, Steel and Wood. Most weaponry of the Pearl Guard is made of a simple steel. The handles of blades as well as Entarian bows are made of pine wood and inlaid with silver and dyed wood to create typical Entarian patterns and designs. Weapons are often disassembled and reforged in new forms. This is because the Entarians do not trade with the outside world and do not have these materials within their own borders. Transmutation magic and enchantments have made it possible for these materials to retain their strength.

Goggles. These goggles are used in heavy blizzards and storms. They allow the wearer to see up to 100ft. through all types of non-magical weather such as rain, fog or snow. The Voronian Goggles are commonly worn by the Winged Legion, the griffon riders of the Pearl Guard.
Amulet. This amulet is not standard issue and is the only symbol of rank within the pearl guard. The Amulet of the Everfrost Spire is typically worn on a leather cord on top of the armor by the three elders of The Silver Triglomerate. The three amulets are identical but each elder is a leader of a different division of the Pearl Guard. 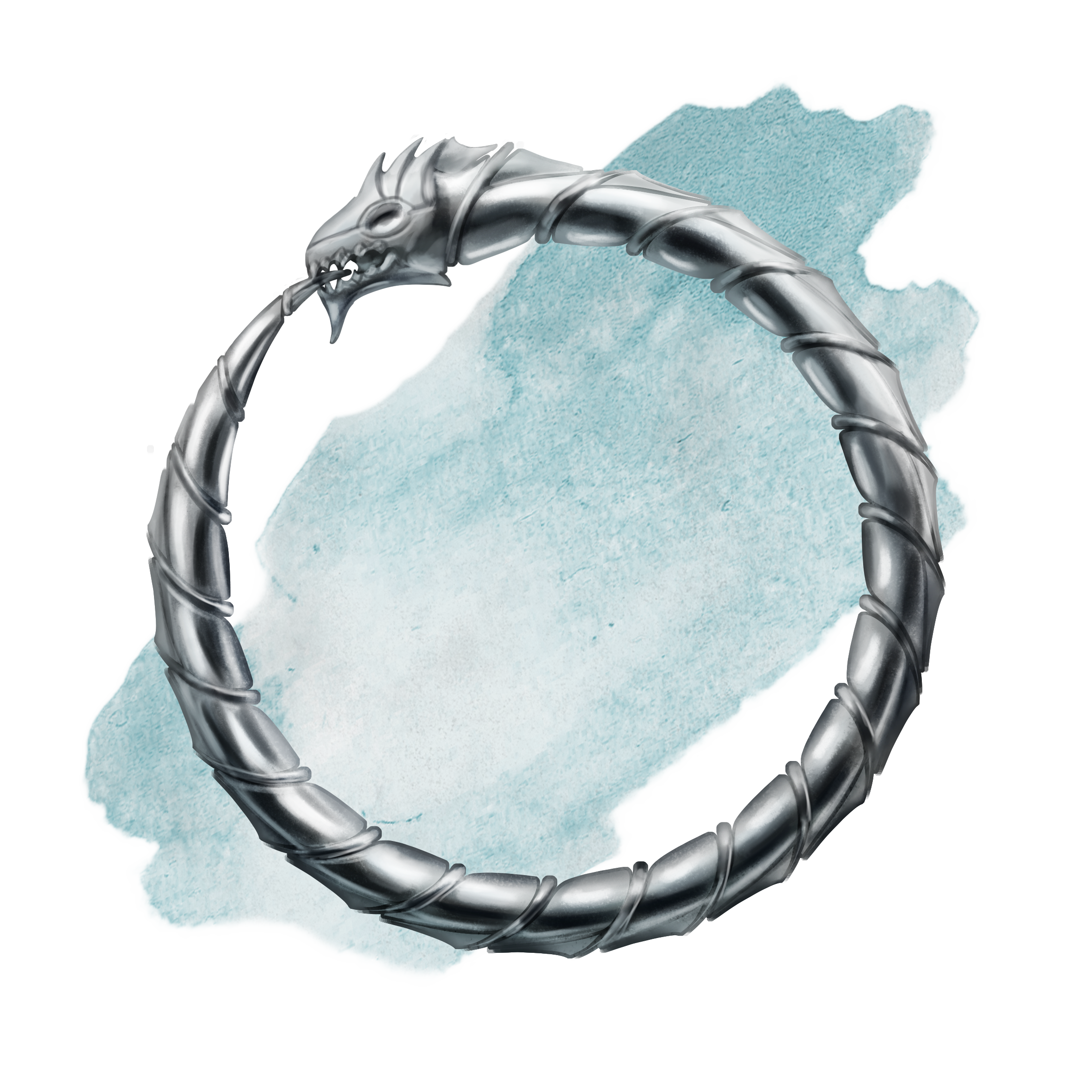 Griffon Saddle. Used by the Winged Legion of Entari. It bears the crest of Entari and makes it possible to command and fly an Arctic Griffon. Each of these saddles is modified and fitted for a specific griffon in terms of measurements but the design is overall the same.
Tumbling Ring. The tumbling ring is a simple invention of the Silver Hand. It consists of a 10ft. long braided metal thread which can be attached to the belt of the uniform. The other end features a large metal ring with a quickrelease. The ring itself can be attached to the underside of a Griffon Saddle and makes sure the rider does not fall to their death if they are knocked out of the saddle. Through the years riders have learned how to perform acrobatic leaps by jumping off their mount and swinging back up on the other side, hence it's namesake: the Tumbling Ring. Some have even perfected the art of attacking their targets while swinging from a flying griffon. 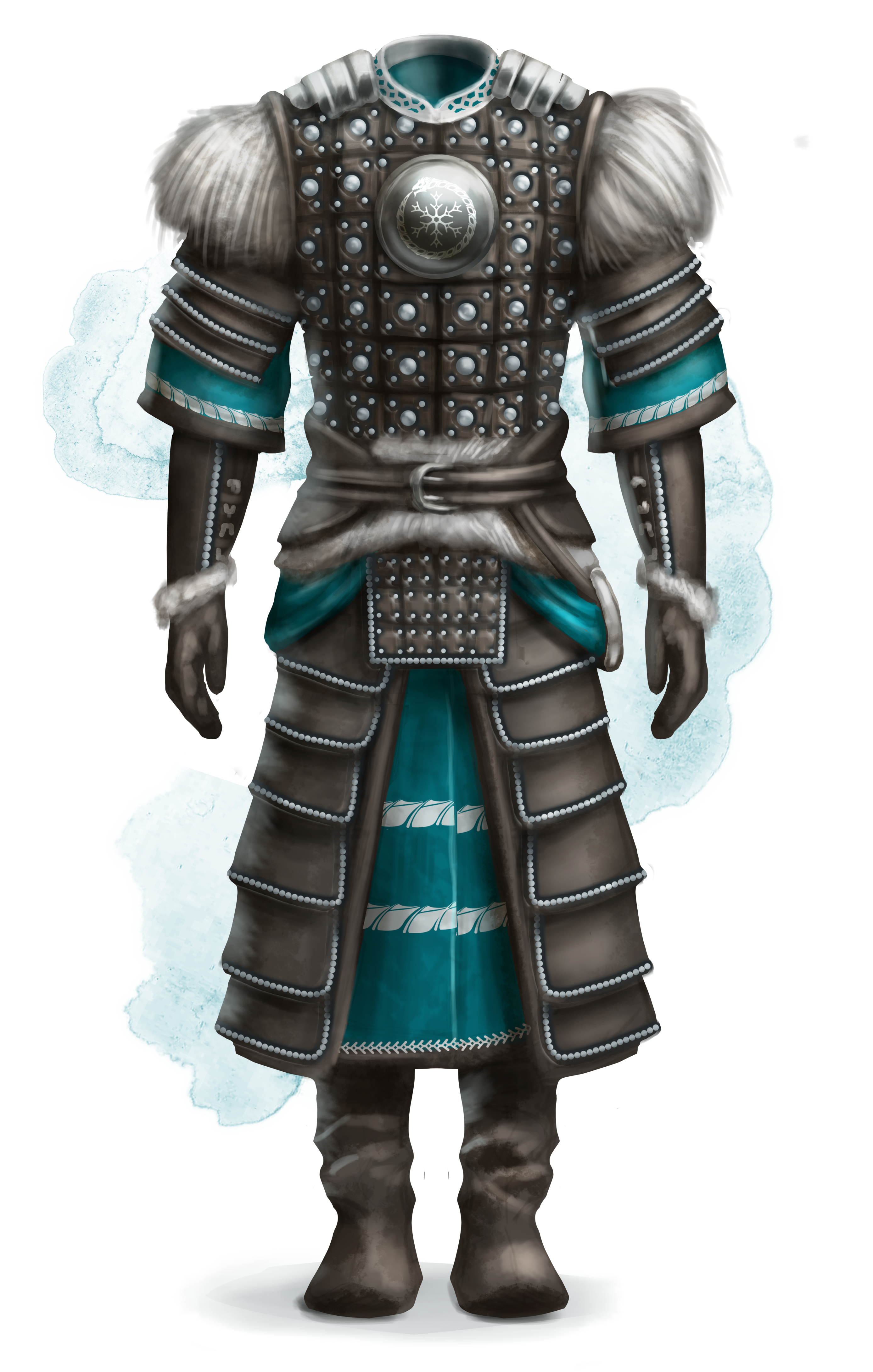 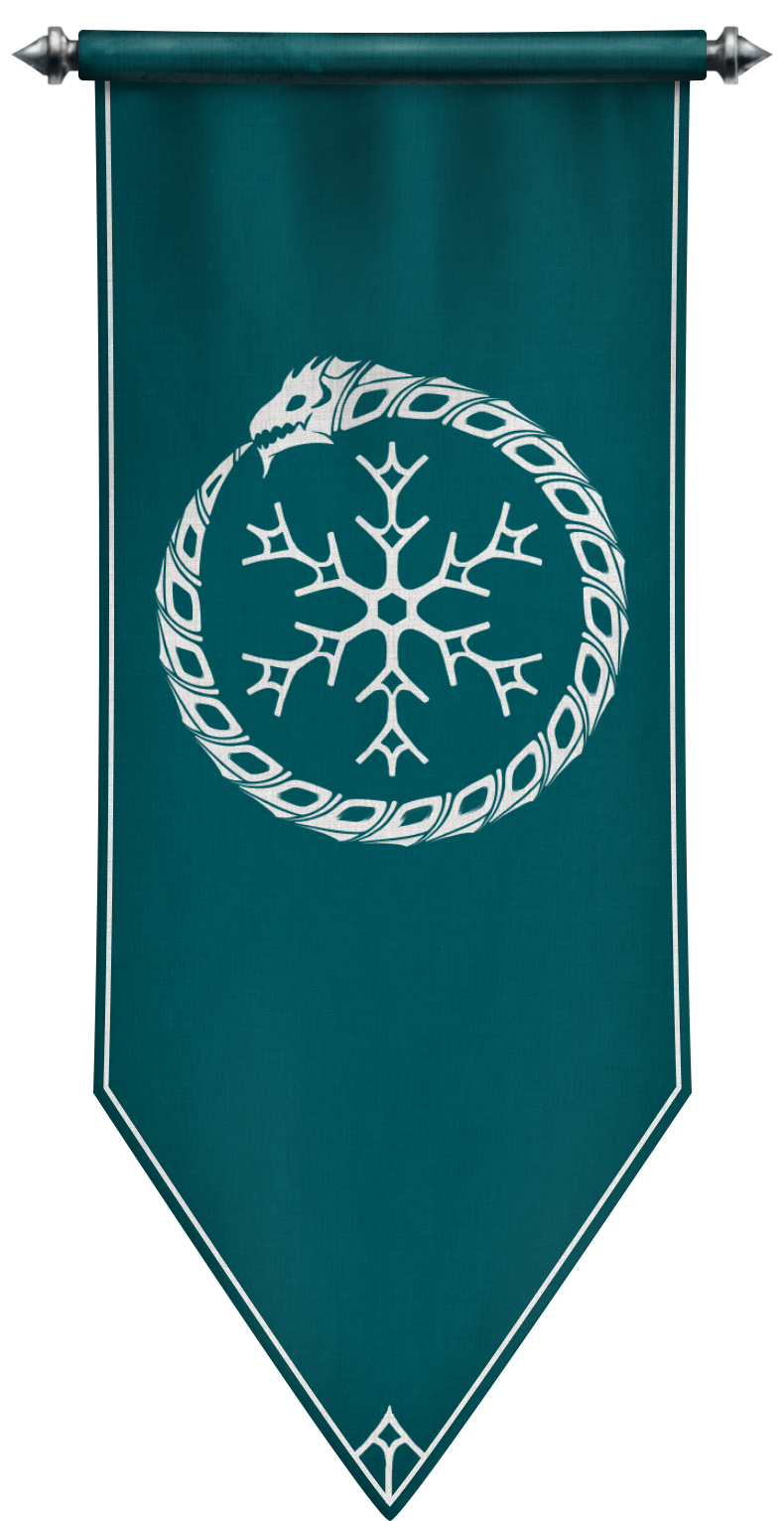 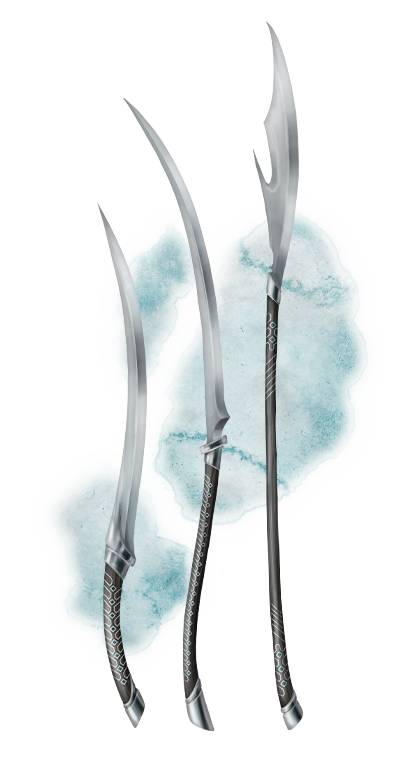 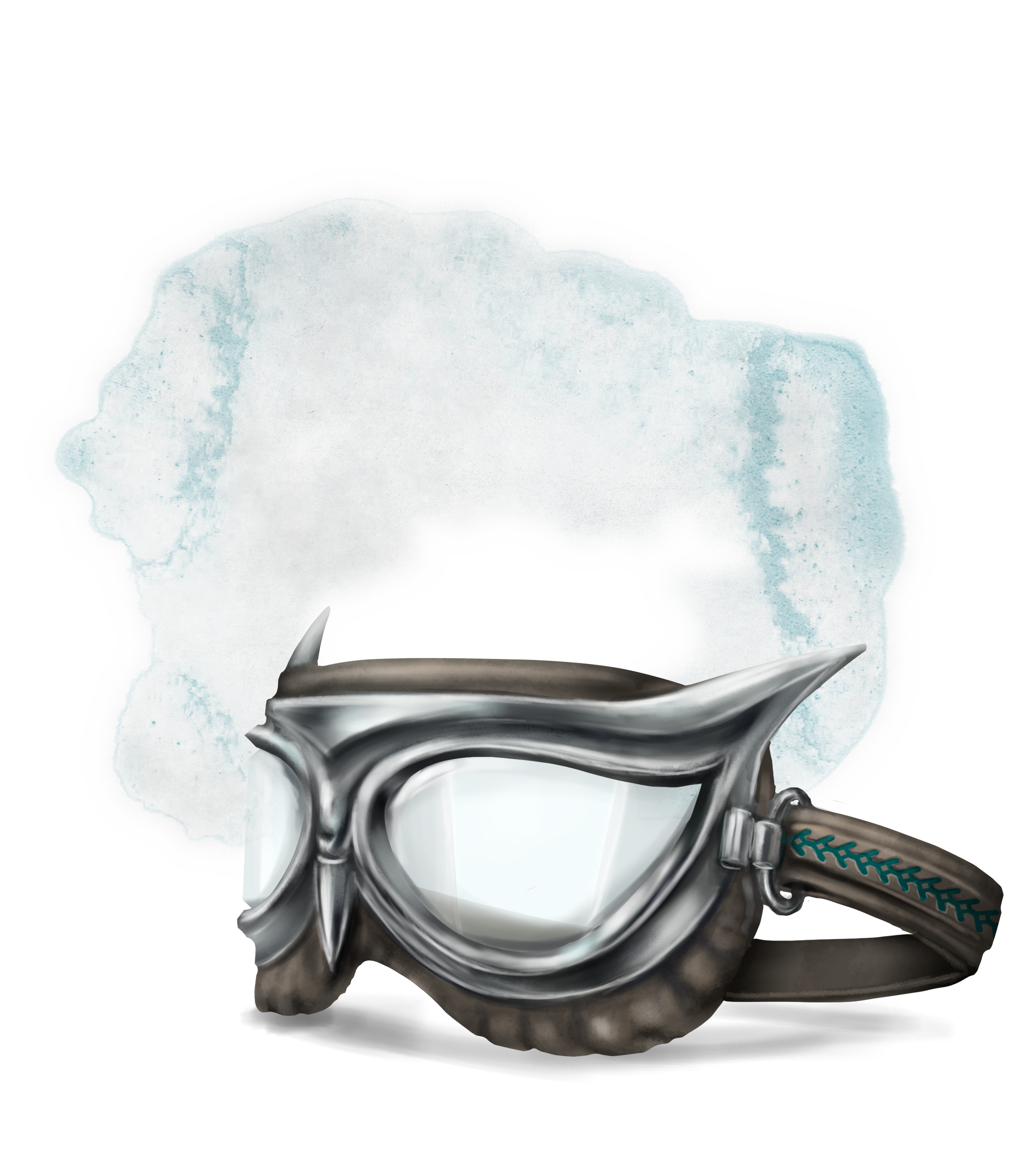 Great article! I really enjoyed the process detailed behind how it's made, there is some nice detail there with the berries and the goats. I am curious, if someone gives away the pearl they get when they come of age, do they then have to be gifted a new pearl if they are to join the Pearl Guard, as it’s part of the armor? Or do those with the intent to join the Pearl Guard just normally keep their pearls?

Lovely details, and I completely adore the simple styling of the article! And your images are awesome.

I love the thought you put into this! The meanings behind the pearls are so sweet. (And the tumbling ring sounds fun! For those who know what they are doing.)

Great colour palette, and the story of the pearls is very touching.

This is lovely. Simple, understated, and to the point. I love your paintings and how everything is tied together. Just a great article!

Great article! Your images are very pretty and they really enhance the article :D You've intertwine culture, elements about the setting (climate, material available…) and given the right amount of details about the material, dyes etc. that go into the costume. I think the only thing not mentioned is where the amulet is worn (sewn on top of the heart, worn as a necklace?)   I love the concept for this uniform, and the idea of the pearls. It's very nice to have something to remember all the people the soldier's leave behind – though they better not have too many soldiers in the same family, or they won't be enough pearls for everyone! Does that mean that they don't have the same family traditions of people going into the army as we do?   Taking the pearls to remember the dead also sounds like a very nice if sad tradition.   By the way, now that you've added the author credits, this has messed with your outlay around he image of the pearl.   I also love your css with the world codex on the left :D

That was a great read, but really a WOW on the art!!

Yo, this be some fancy art, I gotta say. Good work, Tim.

Whoa! Gorgeous art and styling - I love how even the color choices remind me of pearls :D

Your artwork, the color scheme, everything here is really gorgeous! The gifted pearls is a lovely touch, and I like how you've detailed where the colors and materials are sourced. You mention that the Three Spires enchant the armor. What types of enchantments are these?

I kept those details in the article for the armor itself. In the sidebar you can find each separate piece and find out the game mechanical workings (for dnd 5e) :)

Tim! That is one of the best opening paragraphs I've read for this challenge. Coupled with your fantastic art, that's all it took to get me to smash that like button (as the kids say). But the rest of it was just as great.