Treading deep within the hidden forest hollows and under hills of hard stone.
Trolls dwell in the dark and forgotten forests, hidden away from the rest of the world. Other humans consider them myths and legends, old tales of the monster in the wood, and the creature invoked to frighten children when they misbehave. Unlike the stories however trolls are a quiet solitary species that does not seek out violence unless provoked and have even been known to communicate with other humans from time to time.   Trolls can live extremely long lives and are practically immortal only being killed by violent means. This gives them a slow and measured perspective on the world. They resist change however and attack anyone participating in the destruction of forests and hills in which they have claimed territory. Despite their normally mellow demeanor one the most terrifying truths regarding trolls is that they will eat humans in rituals to their own gods. Although this is done very rarely and only to particularly hated enemies.

A troll stands around 8-feet tall on long thick legs. Their skin is very hard, almost rocky in texture, colored in shades of mossy green or dark greys. They possess long hanging arms that end in large blocky fists that are capable of deft and subtle movements and task when needed. The head of a troll is relatively human like with large green, blue or yellow eyes, a flat broad nose and a hair usually fashioned into beards or varying lengths.   Although they walk upright, trolls possess a severe hunch and this can hide their true size and height at a distance. Despite their awkward physical appearance, trolls are surprisingly agile and were well adapted to be masterful climbers.

Trolls have little in the way of society. They spend most of their time alone, only meeting other trolls during long wandering journey through the region they inhabit. Trolls co exist with other trolls quite happily and do not compete over territory. They seem to trust one another to look after the land but treat other humans with a certain disdain. When not gathering mushrooms or hunting animals for meat, trolls typically wander but do have den in which they return to sleep or gather items of worth. These items of worth to a troll however are normally interesting rocks and pebbles from streams and other woodland curiosities that would have little value to other humans. Trolls have a deep and slow language of their own that is spoken at length with another when the meet. Two trolls can spend several days catching u after not seeing each other for years at a time. 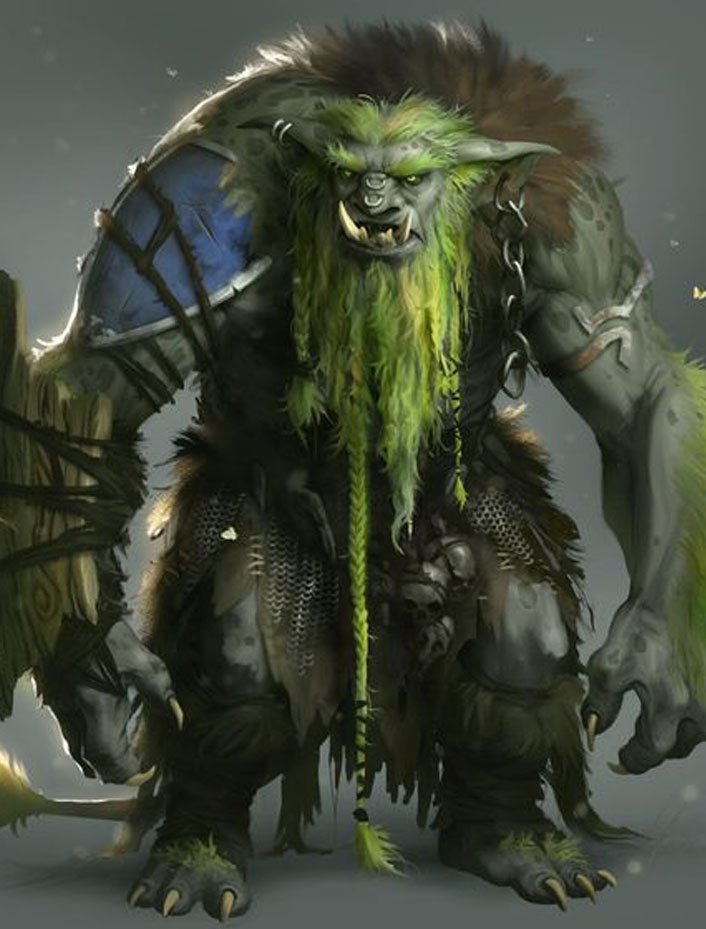