"32 cases, from which only 7 have possessed radical anomalies..." - Kiraan Mog, writing on his victims.

A mystical figure from far-east, a traveller named Kiraan Mog ended lives of at least 32 people as part of his sick and deluded research in Kir Vallen. Kiraan's research focused around researching the change of physiology upon expiration of a corpse, and trying to determine a persons calling in afterlife through that. Specifically, Kiraan was interested in the decay of eyes and any signs revealed through them. (Art: Grigori Rasputin from Hellboy comics)

Kiraan seemed to be in peak physical condition, showing both great strength and agility.

Kiraan had sunken, lazy eyes and a triangular nose. He had tightly pressed lips and a rather large forehead.

Most often Kiraan would've been seen in a slightly torn monks robes.

Little is known about the history of the mysterious monk. Kiraan referred in a tome of his to have "had a different name before, in his earlier life to the East".

All in all, Kiraan clearly seemed to possess a twisted, but an intellect mind. However deranged he was, the man seemed to be highly trained in some level of anatomy and maybe even engineering.

On 7.7.708 Kiraan Mog was arrested. Upon his arrest, it became evident that he was a murderer responsible for taking the life of 32 people over the years in Kir Vallen. 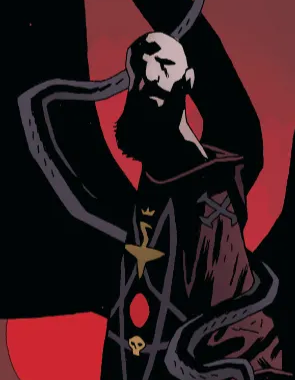