There is opportunity is chaos. The Fae saw this, why else would they choose Tairos if not for the disorder they saw here? Their failing was wishing to sit at the top of it. Chaos is a ladder not a throne. Such simple miscalculations are for the vain and the defeated. I am neither.
— Sifter


The Tengu known as Sifter has tried to live his life in obscurity as all his people do. For, it is from the shadows that they do their best work.

When first he arrived in Tairos he was already in his early adulthood and working with the Speakers of the Conclave to bring to life the arcane machinery they'd need in order Reap fuel from this land. It's during these years that he came to master the fundamentals of engineering, alchemy and most importantly, subterfuge. For, what the Tengu intended to with Tairos required the utmost secrecy. While it is true that the Tengu fled their homeland and were in search of a new one, they had no intention of making a place as volatile as this their final destination. The Reaping would be the means by which they could harvest what they needed to build stronger ships and gather magical fuel needed to tame whatever lands they found more suitable. Sifter's mechanical and alchemical expertise were certainly awe-inspiring but his ability to manipulate the interests of the natives toward accomplishing his goals was what put him above his peers.

He quickly joined with the Black Thorn Society and rose within their ranks. They valued his analytical mind and talent for organization though he was careful to avoid promotions that would force any undue exposure upon him. After all, it was not wealth or position he craved but rather just furthering the end-goals of his people.


Sifter continued to advance his understanding of Reaping and how to refine the process. He learned which type of bioms in Tairos would yield the most output and how to slow the inevitable toxicity levels in order to avoid detection. Through the Black Thorn networks he also managed to create a web of contacts who could aid areas of transportation, labor, and risk management. And, their loyalty was unshakable so long as the payments were generous. His contacts also engaged in the kinds of lifestyles that made them prone to quick and violent deaths. Once they outlived their usefulness it was of no one's concern that they vanish.

It is also in these intervening decades between the Tengu arrival and modern day that Sifter became something of a renown problem-solver within the Black Thorn, much to his dismay. Tairos is filled with threats that do not obey the typical rules when it comes to the danger they pose and how to overcome it. Overcoming such four-dimensional obstacles was something of a hobby for Sifter but also excellent intelligence to pass back to the Speakers should it be needed elsewhere in their efforts. He put his talents toward developing restoratives for petrification effects, certain "uncurable" poisons, mechanical devices to attach to weapons to allow they to harm incorporeal undead, machines that could ward off demons and even a chemical called Mage-Bane that would make spellcasting a nearly impossible effort for those injected.

The things he saw and overcame with his science created a rare feeling for a Tengu, one of pride.


The deeper Sifter delved into the strange arcane sciences behind many of the creatures that made Tairos home the more me hungered for the secrets behind each of them. Where they came from? How they function? And most importantly, how to augment or weaponize them for personal use.

The further Sifter explored explored weapon design the less he could report back to the Speakers of the Conclave though. His task was not to become a weapons engineer but to further the greater good of the Tengu. While some of his advances in weaponry were appreciated by Tengu leadership most were seen as a deviation in purpose and an unnecessary expenditure of time. The more they told him to refocus his efforts on supply chains, scouting locations for reaping and other such goals the less Sifter reported in to them. Soon, he would only be giving them the briefest reports and making only minimal efforts toward the tasks he was given. Instead, every rebuke of Speakers fueled his resolve to study weaponry and arcane abilities. The cadre of Tengu assistants that worked under him was purged of any that didn't share such a passion as well.

Word of Sifter's increasingly distasteful research was hard for the Speakers to ignore. The Gel-flame Caster, Shatterstone Array, Spirit Ward, Mage-Bane Field Generator, Pudding Rocket, and The Anchor all had some practical applications that the Tengu leaders were happy to have access to. However; weapons like The Shears, Crawling Mines, Veil Breaker Missiles, and the engineering of Toxin Elementals all shook the Speakers to their core. These weapons were apocalyptic in their scope and seemed to exist only as testament to what Sifter's genius could overcome.


Point of No Return


The Speakers continued to tolerate their agent's perceived eccentricities because of his track record of successes (as few as they had become as of late, they were still worthy advances in the grand scheme of the tengu). In fact, many of his side projects became the basis of entire lines of study for tengu engineers back in Tengu Town. Some of these devices had even been mass-produced and secretly added to the tengu arsenal. Even the hyper-violent weapons of choice for Sifter, the Manaspark Pulse-Generator and Gasp-Gas Fogger, were not enough to turn all the Speakers against him. They condemned those weapons and made sure they never saw study among the rest of their people yet they couldn't bring themselves to believe the impossible... that Sifter was capable of valuing personal pride above the good of his people. Such a thing was impossibly rare for tengu and a deviation to this degree was unheard of.

Yet soon, they would be forced to confront the terrible truth when the learned of their agent's most recent success. A new form of Reaping he had mastered... one that could be used not to pull energy from the land but to convert lifeforce itself into manacite. It was a process that terrified the Speakers for it so completely destroyed those it was used upon that not a speck of their substance remained. Nothing that could join the Conclave. Nothing that could be found with any of the soul-searching spells. Nothing. It was a means of total erasure. The Speakers were forced to act and in doing so they've issued a secret order to their agents... kill Sifter, no matter the cost.

Something that Sifter is fully aware of. The treachery of their agent was thought impossible and they assumed they fully believed that he had killed all the tengu that were working with him. What they forgot to take into account is the level of skill Sifter possessed in network building, manipulation, and seizing upon the ambitions of others. He has his own agents within Tengu Town and even among the servants of the Speakers as well as the handful of his own deviant apprentices all of whom work to keep him one step ahead of his enemies.


Sifter had remained out of reach to all his enemies but he had not taken into account a chance encounter between the Black Thorn market he was traveling with and scouts from the Westbound Star Company. Sifter had been operating a Reaping lab to sell Manacite to the many clients of the Black Thorn and to show off his new method to one of the Thorn's highest ranking leaders. This new Reaping process was being called the Life-Bane Harvester by those assisting him though he never cared for the sensationalist tone of that.

Chaos soon erupted in the hidden markets with Sifter entirely unaware of what was happening or why . However, it was during that combat that Sifter was gravely wounded by one of the scouts who shattered a bottle of unstable manacite in his hands before he could throw it at them. Half of his body was immediately consumed by powerful arcane fire and only by the quick intervention of his loyal apprentices did he escape and survive.

Much of what followed was an agonizing daze for him. He was hauled through the woods and eventually united with Heinreich Klamp , one of the Black Thorn's clients who also attended the fatal market event. After a considerable amount of painkillers and healing reagents were applied Sifter became aware enough to recognize the danger they were still in. He was stuck with the bombastic Klamp who seemed dead set on settling some personal vendetta with these scouts as well as escaping with some valuable slaves from the market.

By the time he was lucid enough to take action they were already surrounded by the scouts and fighting a desperate battle. Sifter also realized that his wounds were far more grievous than imagined and that immediate action needed to happen if he was to survive. He confronted the greatest of the dangers arrayed against them personally, an elven druid who seemed enraged by what was happening to the forest around them. Sifter managed to down the elf long enough to escape; the effort came at the cost of several of his apprentices though.

Once broken away from the recklessness of Klamp they retreated far from the battle where Sifter began work on his next great invention, a series of desperately needed augmentations to his own body to ensure survival. What would result from these long hours of crafting and excruciating pain would be yet another of his technological terrors. A series of prosthetics, implants, and equipment that fueled his ravaged body with manacite fuel and healing chemicals. The entire apparatus also incorporated Manaspark Pulse Generator and toxic fume casters, both of which greatly enhanced by the raw manacite fuel flowing into them.

All of these enhancements are not without their cost. His physical body is still fragile and in need of constant access to the chemicals in the harness. They hamper his movement and force those around him to listen to the constant pumping, hissing, and whirring of the devices. The long term effects on his mind are as of yet unknown but it is possible that it could leave Sifter's mind entirely shattered. 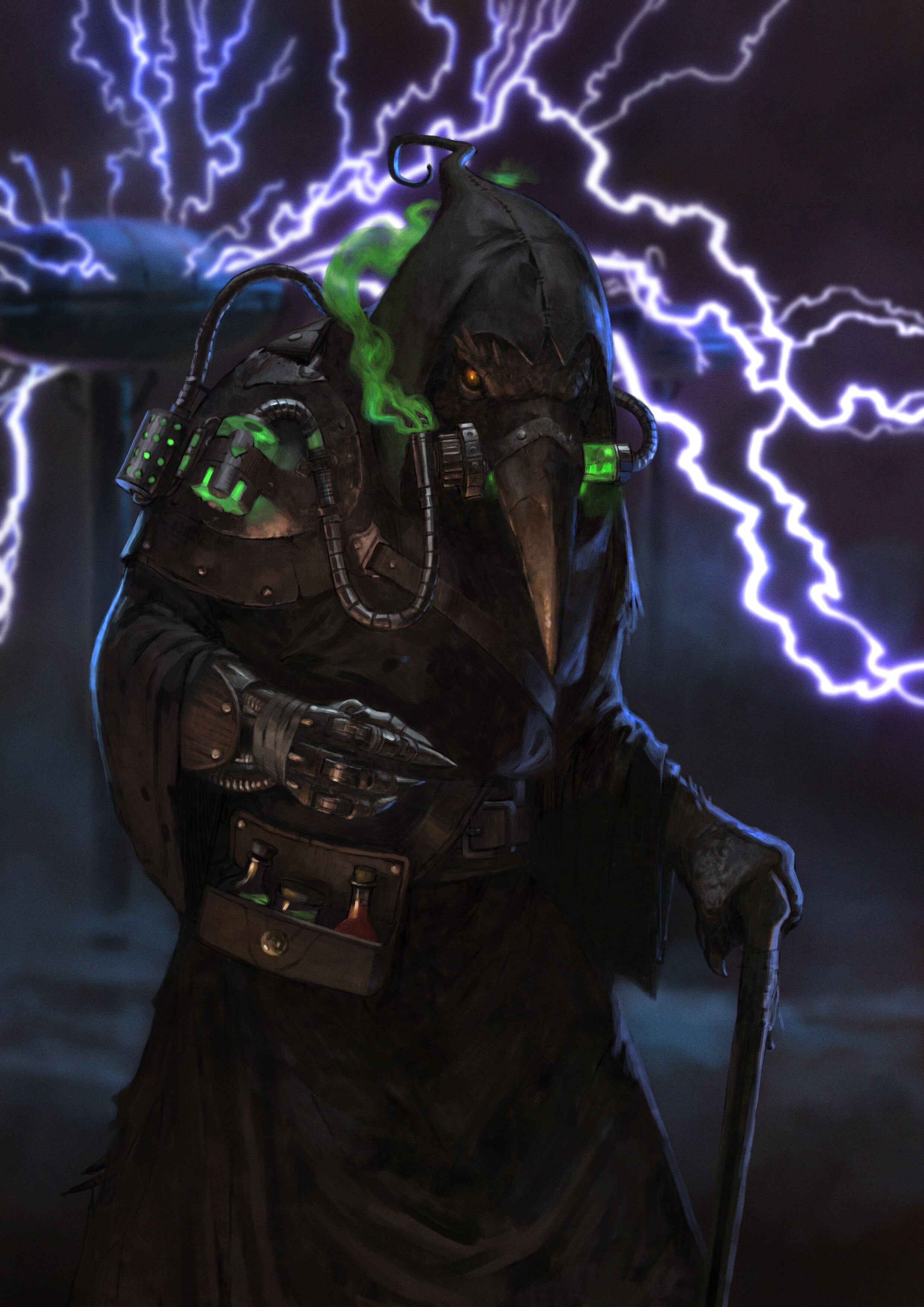 Many of his words are accompanied by the hiss of his respirator and delivered with a hollow, mechanical tone

Answering: "Write about a great thinker in your world and the impact they had on society."
Visit thechosenone's Competition Page Check all other answers to this prompt Competition Homepage