I've never seen so many people so close together. Why would you live here when there are perfectly good trees to sleep under?
— Caellana, visiting Ghal Pelor

"Who keeps raiding the pantry," Old Bear exclaimed, slamming the door to the wagon behind him. His job was hard enough without stealing being something he had to grapple with. He turned to lay into a guard when he saw it, the little flash of bushy gray and brown tail skirt around the corner. It was that blasted foul creature!   "Wren!"   Old Bear nearly bowled the guard over as he pushed past him, tearing into a full sprint after the furry woodland companion. As he rounded the corner of the wagon, he saw the thing duck between some logs, and into the wilds their wagon train was resting near.   "I'm gonna kill the fuckin' thing," Old Bear said to no one in particular, as he pulled a wood chopping axe out of a split log and trudged into the forest edge, murder blazing through his eyes.   After passing through a few trees, he briefly paused to find the tracks again. It was elusive, but Old Bear had learned his tricks over the past few months of working together. And once he had the trail, the rough Ostler would not let go of it.   Quietly sneaking up on a clearing, he readied his axe. This time, he was going to have its head. He reared back, spun from behind a tree bellowing a mighty roar, and stopped. He watched the creature drop a loaf of bread at the feet of the young thin elven lass, Caellana, who sat in deep meditation. Wren looked back at Old Bear, who flushed when he saw the sight. He couldn't be mad at her, no matter how hard he tried.   Her eyes fluttered open, most likely disturbed by Old Bear's shout. He began to apologize before she cut him off, as she spied the bread before her.   "I thought I smelled this! Did you bring this for me, Old Bear?"   Wren stared him directly in the eyes. Old Bear's face went slack with confusion for a minute, then a grin played on his face. "Yup, it was me, I knew how much you liked the stuff, Ellie," he said hurridly.   "Oh thank you! Have you tried this before? It's simply delightful," she replied, then began to devour the loaf. Wren sneered at Old Bear, who chuckled, turned, and walked away. As he reached the end of the wild he heard her say something.   "I know it was you, Wren, but it makes him so happy to think he's helping. What's the fault in that?"   Old Bear sighed and got back to work.

Born 230 years ago to unknown parents, Caellana Merathiel spent most of her long life in the woods in seclusion. In fact, she was given her name by passing elven traders who took her in briefly after she was assailed at a young age by bullies. It was in those early days that she learned she was an elf, as well, for she had no idea until those bullies hurled racial epithets at her that she didn't understand.   She spent only a few years with those traders before growing tired of the abuse she suffered from them and the community, and pursuing the warm embrace of the wilds she initially grew up in. There she found kinship with the animals and fae creatures that inhabited it. She played with wisps and cared for wounded birds. She would disrupt hunters and helped tend to the trees. She quickly found she had some latent capability to heal and breath life into the wilds that gave her so much in return. She wouldn't push herself but she accepted her gifts comfortably.   She would only briefly venture into the world of men, and very rarely at that. The stone walls and pathways confused her and the air was unfamiliar. She couldn't communicate with anything in the way she could in the woods.   Then the war came, and with it, the twisting of her friends. The fae creatures she once claimed as kin became cruel and anguished under the banners of the Autumn Queen. She withdrew further into the wilds to avoid the conflict.   It was during this time that she encountered a lone creature that seemed to be both a cat and fox at once, with sharp red eyes and bushy sheath of fur. The creature spoke to her and identified himself as "Wren," and the two became fast friends. Wren, similarly, felt cast off from his animal companions for being too strange a being.   Many years would pass, the war ended, and while the woods twisted and corrupted around them, Caellana and Wren tended to a small grove deep within the Rylan Woods. For almost 200 years that grove would go largely undisturbed by the world around it, as Caellana and Wren worked tirelessly to misdirect explorers from it. Thanks to Wren's unnaturally long lifespan (a fact that didn't bother Caellana) and a latent magical ability Caellana had that she didn't quite understand, they were very successful at this for a very long time.   Until Caellana felt the tug of wanderlust. While Wren would caution her not to leave her grove, after over 200 years of tending, and so many seasons that passed by in a blink of an eye, Caellana was beginning to feel that call to explore beyond her grove. She wanted to understand what happened to the world and her former friends beyond those tortured boughs. She began to engage with the explorers rather than chase them away, and would offer them aid, directions, and supplies. Eventually she made a name for herself and began work with the Westbound Star Company ... and was about to take the journey of her lifetime. 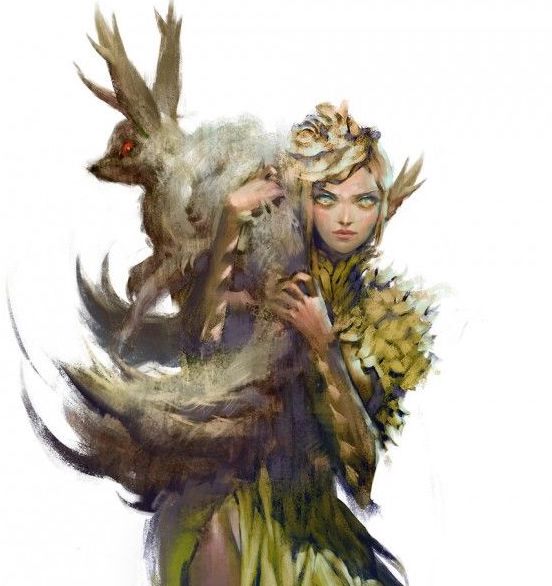 Equipment
I’m oblivious to etiquette and social expectations.
I often get lost in my own thoughts and contemplation, becoming oblivious to my surroundings.
Personality Traits
Live and Let Live. Meddling in the affairs of others only causes trouble.
Ideals
Should my discovery come to light, it could bring ruin to the world.
Bonds
Now that I’ve returned to the world, I enjoy its delights a little too much.
Flaws
Darkvision, Trance, Mask of the Wild, Advantage on Saving Throws against being charmed, and magic can’t put her to sleep.
Features & Traits
Article template
Character
World
Tairos
campaigns
The New Sanctuary Expedition