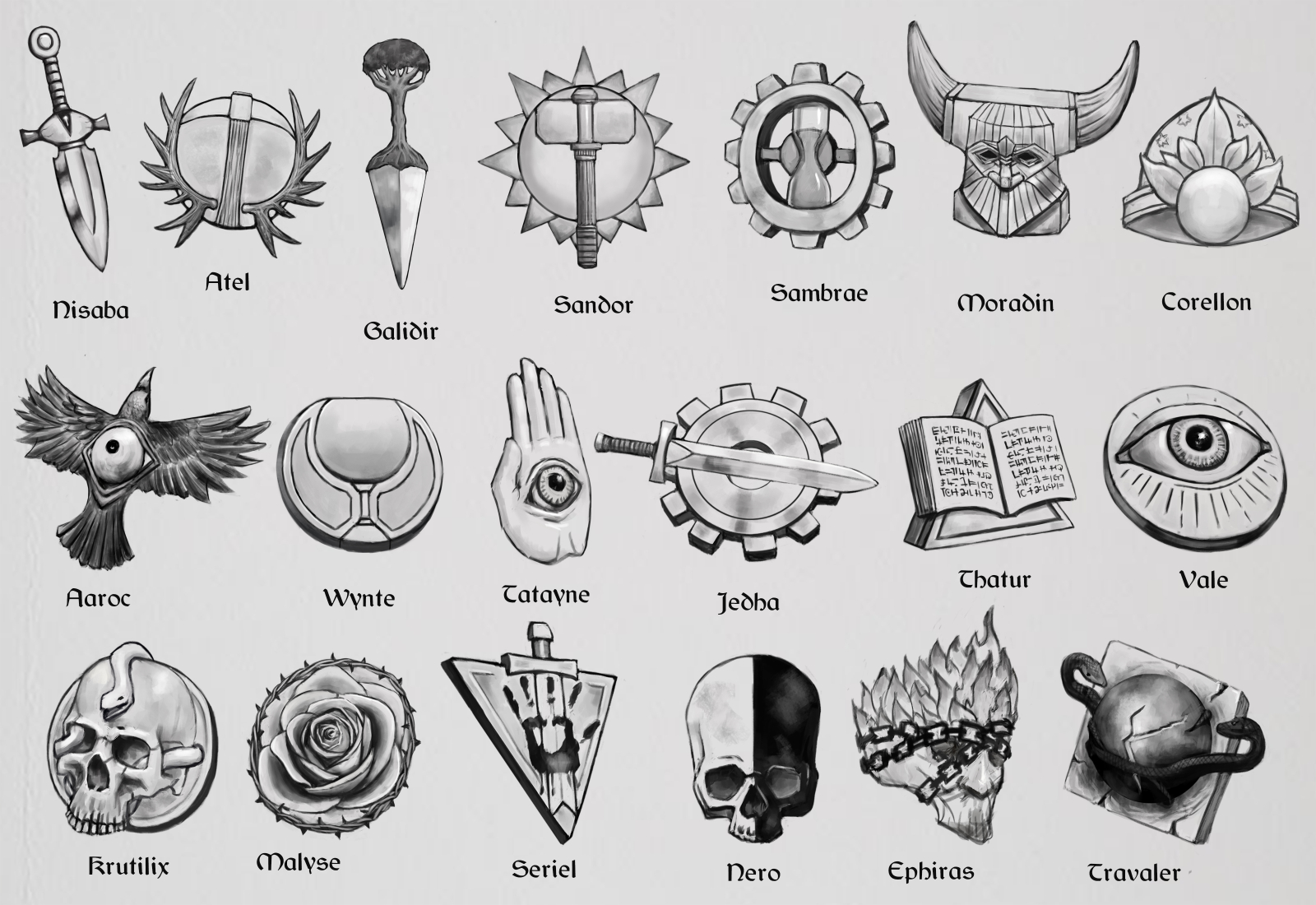 Arrival of the New Gods

If the legends are true Tairos has gods of its own and they glut themselves upon us with all the cruelty they could muster. Those gods are gone now, lost to time and their own alien ambitions. We do not kneel to those gods! We do not owe them anything but our scorn and retribution! They could have had our love and loyalty! The New Gods chose us! Of all the stars in the sky and souls in the heavens they chose Tairos! What greater honor could their be!
— Belikin, Prophet of Vale


There is the Tairos that exists in the history books of the Elves and Dwarves. Their early ancestors were excellent, if somewhat biased, historians and because of their diligence the earliest centuries of modern civilization exist in written record.

There is, however, another Tairos. A darker one who's existence is left in the murky realm of myth and legend. Texts and scholars generally agree that the earliest tribes of Tairos worshiped entities of strange and bizarre natures who seemed to more appeased than prayed to. There is some debate as to the whether these old gods were even real or just the imagined idols of prehistoric peoples.

One certainty though is that the New Gods of Tairos arrived from heavens to shepherd the people of Tairos out of their dark age and into modern history. What they found when they arrived was a vast, untamed continent full of scattered tribes and the ruins of long dead empires.

The early tribes were quick to embrace the New Gods because of the divine miracles and power they promised. They accepted them as a pantheon of entities rather than individual gods who's greatness should be a source of conflict. This was by Sandor's will. The damage that can come from religious wars was well known to the New Gods and none of them wished to see old disasters unfold anew here in Tairos.

The New Gods found considerable opposition to their arrival as well. Even though the old gods were gone they left behind many of their servants. The Spawn of the Scorned One are just one example of the threats to the early patrons of the New Gods. Demons, Devils and other planar foes preyed upon the young races and they were not keen on giving up their cattle to Sandor and his pantheon. The empire of Skyrir rejected the New Gods and took every opportunity to repel these heretics from their borders. The totemic nature spirits were distrustful of the New Gods and feared their sudden arrival was a portent of doom to come.

In those early days before recorded history there was as much war, horror and death as their was the rise of civilization. Most of these struggles are lost to modern Tairos and perhaps for the better. To know these primitive beginnings is to know the nightmares responsible for the foundation of Tairos, to know the follies and missteps of the New Gods and to realize the petty insignificance of Tairos struggles against the scope of the endless cosmos.

It is known as fact that the New Gods exist and that they arrived in Tairos from elsewhere. The context around their arrival and what came before is apocryphal at best and very difficult to prove. The only place that some reliable information may exist is in the ruins of Skyrir.

The arrival of the New Gods was common knowledge before The Queen's Rebuke and the Silence of the Gods. The traditions of the New Gods are waning and generations are growing up knowing little or nothing about these deities and the arrival here.

Their arrival signaled the decline of nature's dominance and the slow death of Tairos itself.

Frostmerites - Because so many of them actually worship the totems and adhere to the old ways the tale of the arrival is largely viewed as a negative one.
Orcs, Goblinoids, Gnolls, ect- These tribal peoples are few and very isolated from the other races of Tairos . They are relatively ignorant of the myth of the Arrival and the times before. They know little of the New Gods. Most of these tribes worship their own ancestors or the nature totems.
Stormlanders- Their culture has somewhat twisted the importance of the Arrival myth. They viewed the gods as having sought out a place of plenty for their survival and link that to their own raids of Tairos' mainland.
Religion in Tairos
Culture
Vale The Architect

Answering: "What’s the most famous fairy tale or children’s story in your world?"
Visit thechosenone's Competition Page Check all other answers to this prompt Competition Homepage