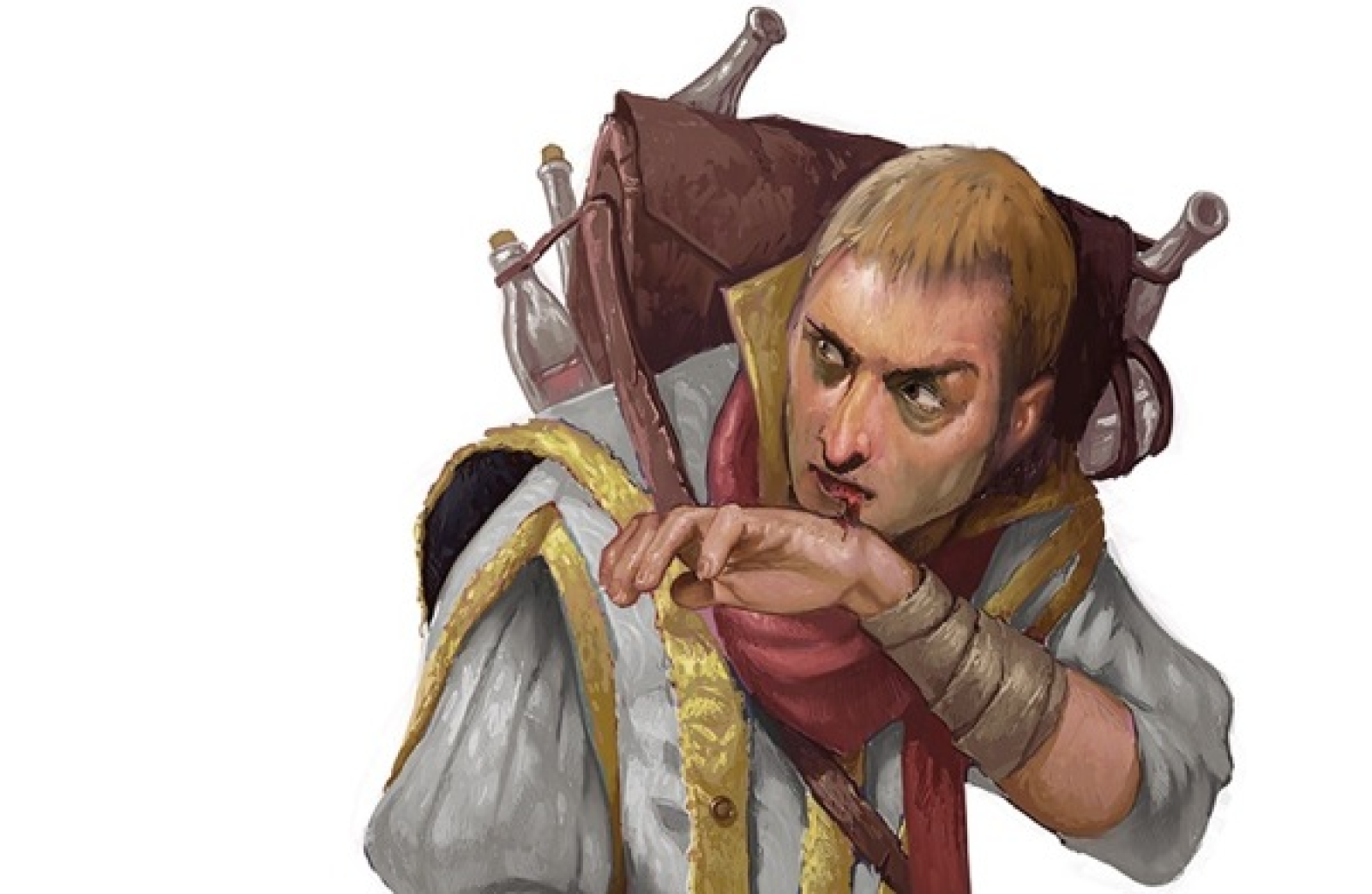 Greyal Svenson (a.k.a. the Alchemist)

Dirty blonde hair that is cut short but uncombed it sticks out at all angles. Tall and gangly of limbs Greyal looks underfed no matter how much he seems to eat. His fingers are long and slender moving so fluidly you would guess there was an extra joint.

Bloodshot eyes that have bags beneath. No facial hair (unless transformed) and sharp eyebrows. His face is angular including his ears hinting to some Fey ancestry a long time back.

Greyal's hands are constantly moving or twitching even when asleep. For as tall as he is he stoops low unless he is fighting or lecturing about something.

Pale leather coat and hide armor. His clothing is stained and tattered due to his reluctance to pay attention to his appearance.

Greyal was a prodigy physiker who learned from village wise women, books, and experiments on his own body. After leaving his town he apprenticed under a physiker who gave him a mild education though Greyal learned more from the mans books and by working while the drunk was too gone to hold a blade. Finally Greyal learned under the apprenticeship of a master Alchemist by the name of Enfeedal.

Greyal begans as an assistant physiker but quickly rose to become a fully recognized physiker. After failing to save the Mayors daughter he was run out of town to become a pilgrim where he wondered the countryside for years. Taken in by an Alchemist he apprenticed under the man before leaving his master as a journeyman alchemist.

Greyal was an physiker of some renown before his career was sabotaged.

Greyal has a harsh childhood where he was unable to learn how to socialize well with others. Greyal is believed to have killed the mayors daughter and was unable to return his master Enfeedal back to his transformed state.

Greyal is haunted by his failures to save the mayors daughter or his master and rarely sleeps peacefully.

Greyal wants to save people but is afraid to do so. After the loss of the little girl Greyal wondered the countryside and had to become adapt at killing or be killed himself. He learned to rationalize the dangers and choices one had to make in life and when to end another. Learning from Enfeedal he found the connection to the primitive state of mind was not something to be feared but used as humanity needed the primal nature to defend itself.

Greyal used to have taboos but has since lost his restraint while transformed by the mutagen. Every time he transforms he feels a little more of himself becoming closer to the other him.

Greyal seeks to learn above all things. When given a job his motivation often becomes how to best complete his tasks making him a good employee until he fails. Without a job or task Greyal is prone to wonder aimlessly or search the countryside for various edible and inedible flora.

Good with anatomy involved with healing or harming he is quick to learn but slow to resolve failures. The atavistic personality has more finesse but lacks social skills and planning to the point it will overexert itself at times.

Likes to learn and read. Dislikes failure and death. As of late the more primal version of himself has begun to revel in the destruction but does not enjoy killing as it ends the pain.

Greyal washes when he can and if he is about to work in a laboratory but often disregards the hygiene of his clothing.


Remove these ads. Join the Worldbuilders Guild
Characters of Note