Rome and the Sasanians    Culture      Roman hairstyle, make-up and jewellery

Appearances are primordial. Without them, how could people tell at a glance how polite they are supposed to be with you? Your clothes, hairstyle, and jewellery have an enormous importance as a marker of identity, status, and even moral character. Thus, it is essential for the social and political stability of the country that you use your appearance to advertise who you are. I, Appius Claudius Pulcher Gavius, honourable member of the Roman senate, is hereby writing a primer for the education of all Barbarians newly integrated in our empire.

Clothes are not the only important element to make you look like a Roman. The first rule for a man is to be clean-shaved. You can always tell at a glance the Greek, Sasanians, and Barbarians by their terrible beards, and no proper Roman will want to be mixed up with those people. While there have been periods of time during which beards were trendy in Rome, our new imperial dynasty has thankfully corrected this ghastly mistake.   Of course, shaving for the first time is scary. Do not make the mistake of having your slaves do it for you! It is far too easy for them to take offence at one of your word and to succumb to the temptation of slicing your throat off. Instead, go to a specialised barber shop, although take care to ask for reviews from their previous customers first!   Thankfully, we, Roman men, have it easy regarding hairstyle: low-maintenance short hairstyle are always trendy in addition to being practical for fighting and everyday care. 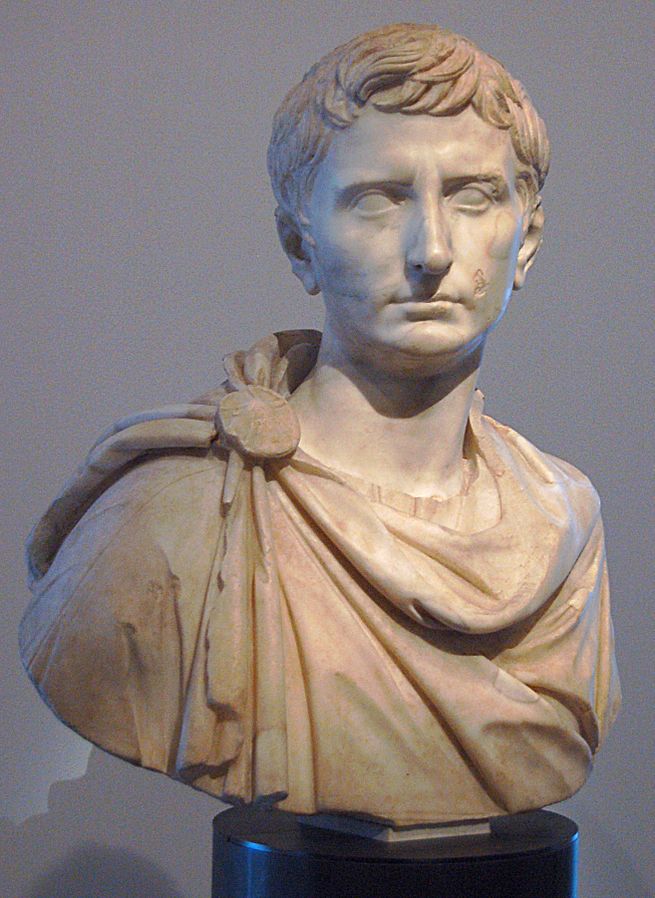 For women, however, a complicated hairstyle is primordial to show off their status. While any good personal slave should be able to do basic styles, a specialist slave, the ornatrix, is there to create especially elaborate styles. Ornatrices are hired for special occasions by those who have the means to do so. Of course, the richest women will have their permanent ornatrix.   Hairstyling often starts by using hot irons to curls the hair if it is not naturally curly. This allows it to give a better grip during styling, thus stabilising the style. Some styles also have short curls framing the face. For the next step, curls are lightly brushed, and the hair is divided into different sections with the help of a bodkin, with more bodkins used to pin it out of the way. Each section will be arrange in a specific manner, mostly with different types of braids and twists, before being all joined together in a final braid or bun or being left to fell free.   All of this is, of course, maintained together by sewing. To hide the stitches, decorative rubans or leather stripes can be added on top. Accessories can also be use to style the hair, including ropes, decorated bodkins in ivory or precious metals, hair nets, and more elaborate rubans.

Hair fashion changes quickly, at least once every generation, and women need to be able to keep up. If their hair do not have the right colour, they can use lime or soap to make them lighter, then dyes such as henna, walnut husk, or ivy berries to colour them.   Having long lush hair is very important and a pride for every Roman woman. If a woman does not, she can add volume by hiding puffs under her hair or by attaching small extensions in the appropriate places. Those can be made of human or animal hairs, or, more ludicrously, of grasses. Once again, the senate has come to our help by imposing a fierce tax on the import of hair in the empire! There is no need to send our silver to India when we have perfectly good hair everywhere in Rome!   Most hairstyles are rather quick to make, with the longest time spent on preparing the hair by curling and braiding it. The most elaborate styles, however, can take hours of work. Those will be left on the head for up to a week to avoid repeating that too often, and a husband would do well not to put it in disarray if he does not want to be banished from his wife's bedroom! The styling of a woman's hair is a very intimate act, and you should count yourself privilege to witness it. As such, it should never be done outside of the house.   Hairstyles are so important for a woman's status that all empresses' coin portraits are very careful to reproduce all details, so that everyone in the empire can witness them—and copy them. 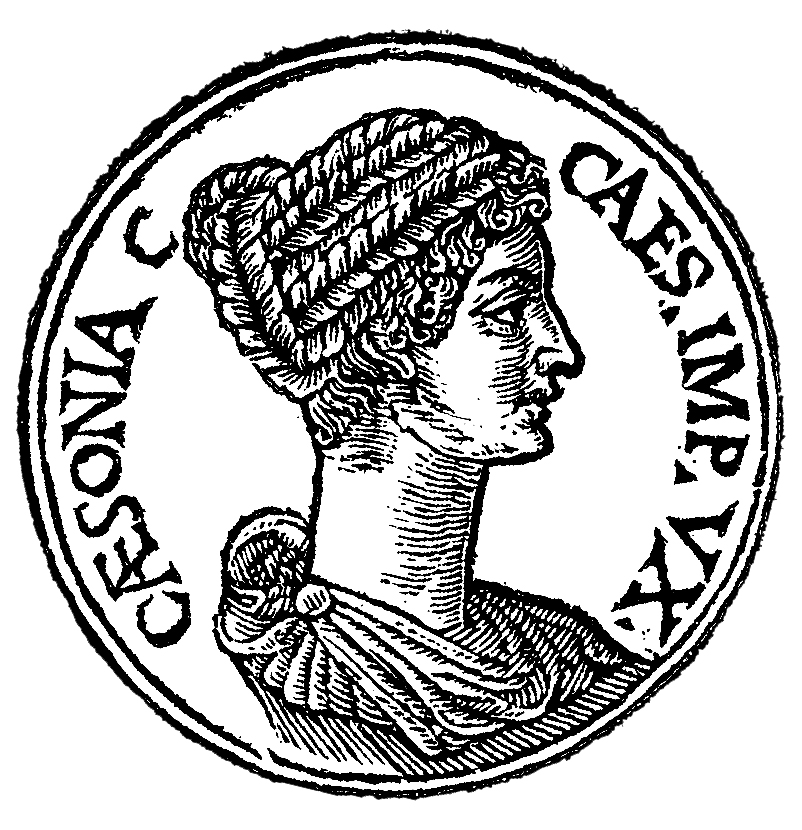 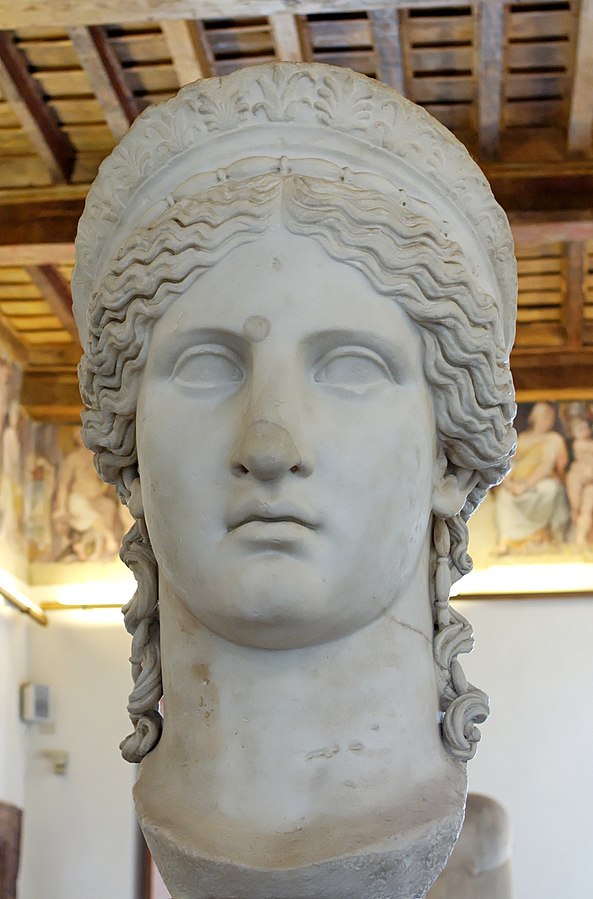 
As everyone knows, make-up is a mark of immorality. Only prostitutes cake their face with plaster. However, most Roman women's fall pray to the trap of thinking that, if they are discreet enough in their application, they can get away with it. As our best physicians have recently shown, it is through the very weapons of their crime that their punishment comes! Indeed, in their hurry to wear metal powders and creams on their skin to make use of the ability of metal to retain magic, they are poisoning themselves quite viciously.   You wonder why anyone would continue to wear such things now that their toxic effects have become known. Tragically, the attraction of being able to enchant the make-up into making you even more handsome is too strong.   Learn the names of the poisons to be ready to avoid them yourself! On your skin use plain chalk rather than any lead-based powder, and on your cheek, petals, wine, and the juice from berry rather than expensive cinnabar full of mercury! Do not scorn charcoal or ashes to darken your eyebrow and kohl to line your eyes and highlight how big they are; they are far better than any antimony! And do not forget to use sheep lanolin to perfectly moisturise your skin. They may be cheap, but their safety is ensured. And if you insist on making your eyelids blue or green, take care to crush the lapis lazuli or other stones very thinly rather than become blind in your need to beautify yourself! 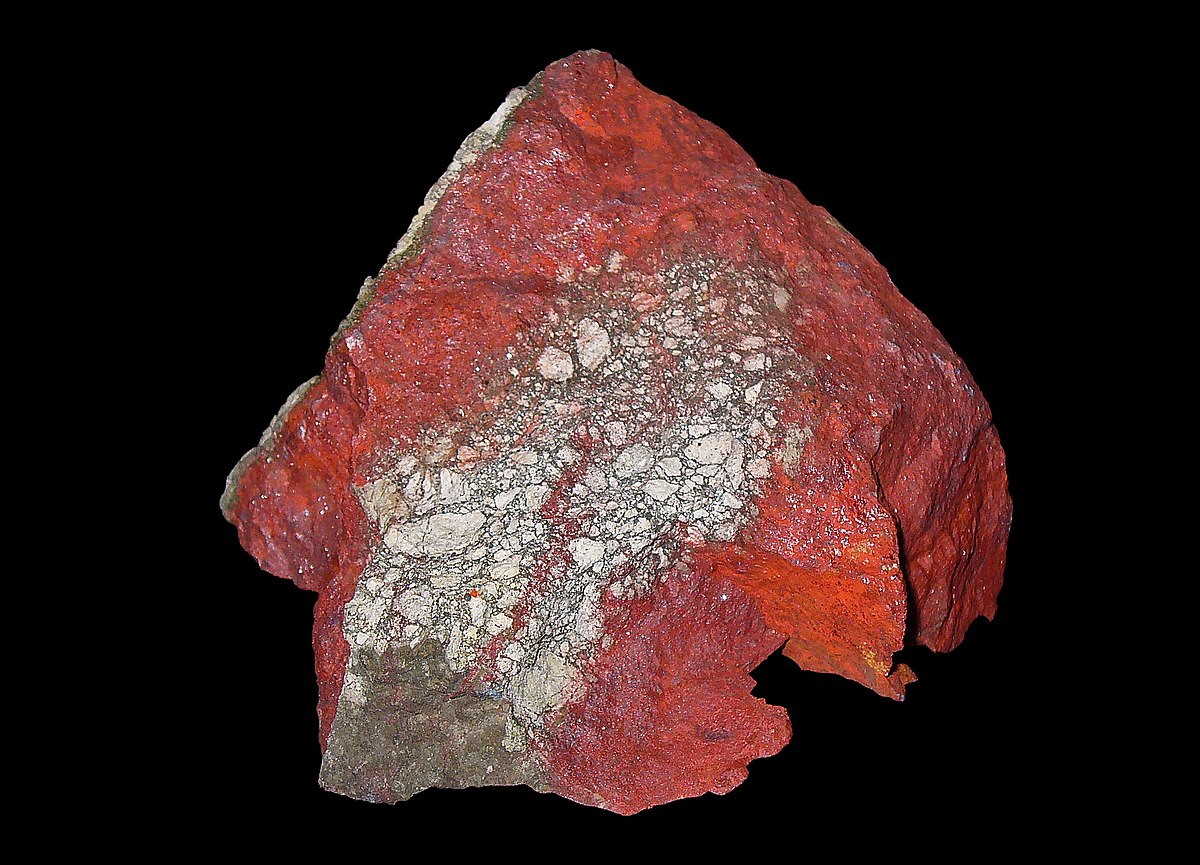 Toxic cinnabar, the perfect rouge! by H. Zell on Wikipedia

This is where a lot of fun can be had by everyone. Indeed, even you Barbarian will know that most jewellery is made of metals and so can be enchanted and used to amplify your magical skills. Of course, each god has its favoured metal, and it is important to choose which one to use carefully depending on which branch of magic you wish to play with. Resist the temptation to get as many kinds of metal as you can in the vain hope of gaining more power! That would be a terrible mistake! Everyone knows, all gods have their friendships and enmities, and their metals cannot be combined with just any other's god or you risk offending them.   Since metals leak magic over time, it needs to be reapplied regularly. However, once the metal has been treated with magic, it remembers it, and so it is easier to recreate the same magic later. As I have mentioned before, a highly sophisticated treatment allows a metal to retain its magic forever, and even to accumulate it over time. Only the most powerful families of the world own one such heirloom. Since Rome is so powerful, at least a dozen of our families are known to own several. The Claudii are first among them, of course.

We all know that gold is terrible at storing magic. It is certainly much less efficient at it than iron. Yet, who will respect any Roman so afraid that they will wear nothing but this metal of war in the heart of the forum? No, the mark of true leadership is to be covered with nothing but gold, most shiny and useless metal of all! Its wearer needs no better proof of their power than to be able to walk among strangers without any magic reserve on their person. But do not always trust your eyes, as many will seek to deceive you by plating their miserable iron with gold leaves.   But jewellery is not only made of pure metal. Precious stones and crystals all have gained unique properties through their lives thanks to the unique combination of metals found inside of them and to the different environmental magic they have been exposed to.   Pearls are very particular, for they do not contain metal in their envelop. However, pearls are formed when a grain of metallic sand is trapped inside a mollusc, and the pearl forms around it to protect the animal from its magic, trapping it inside. Thus, each pearl has its own mysterious magic, making it a truly inestimable treasure—a treasure that any Barbarian like you is unlikely to ever see up close! 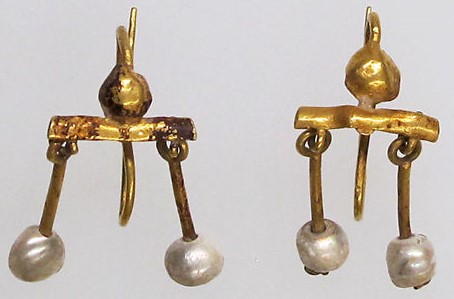 Roman gold and pearls earrings by The Met 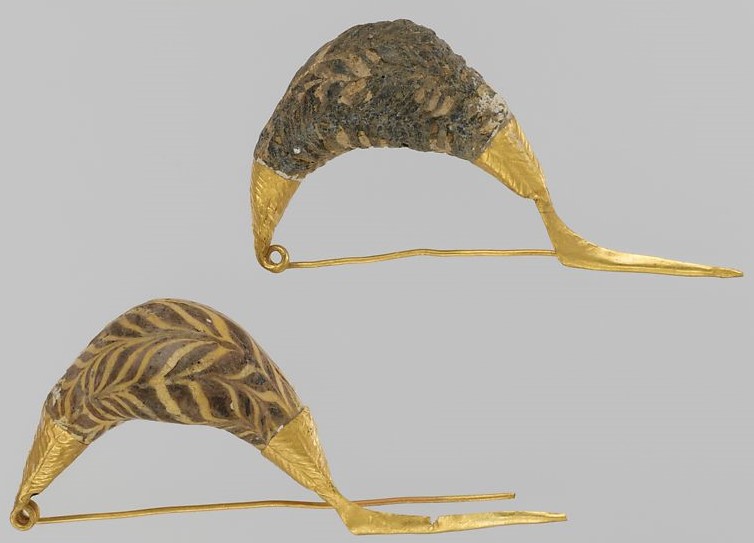 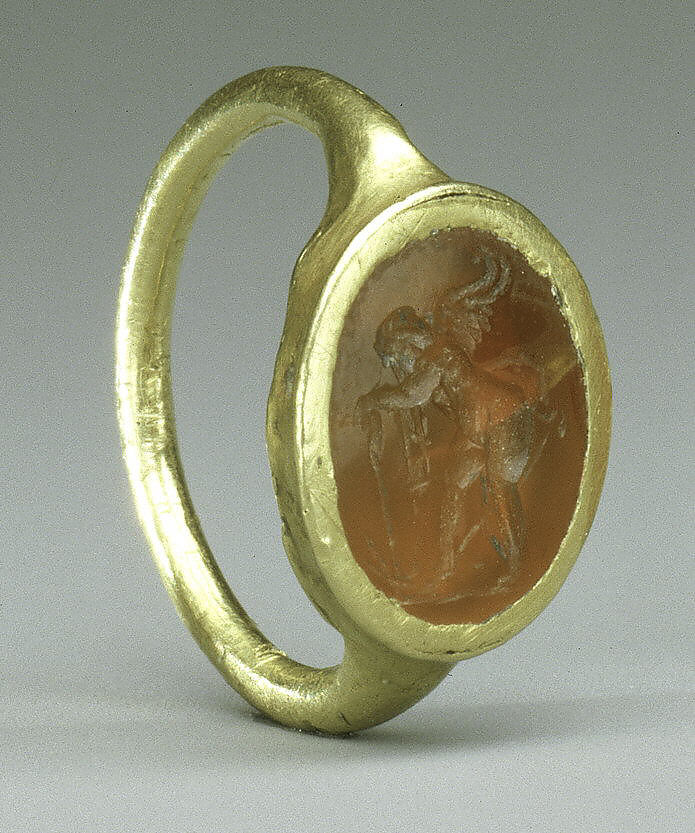 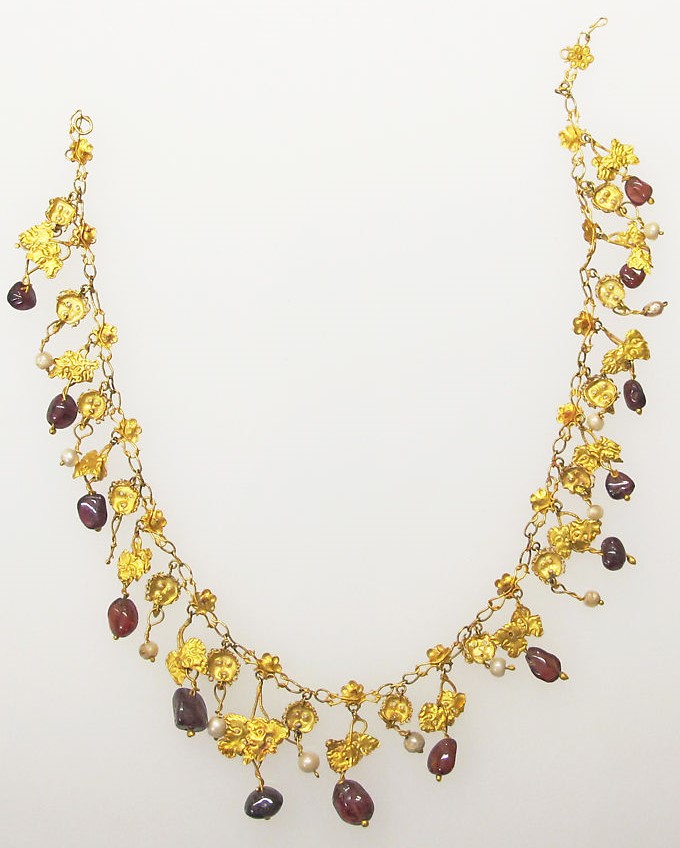 Roman gold necklace with garnet and eearls by The Met 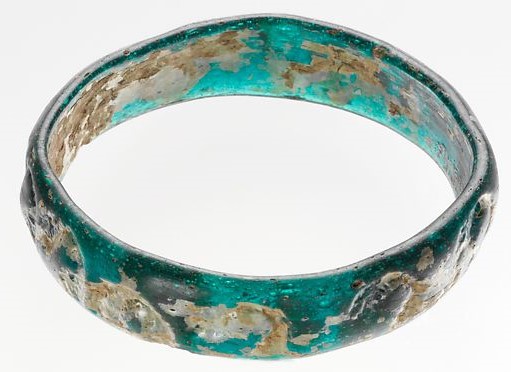 Roman glass bracelet with stamped lions by The Met 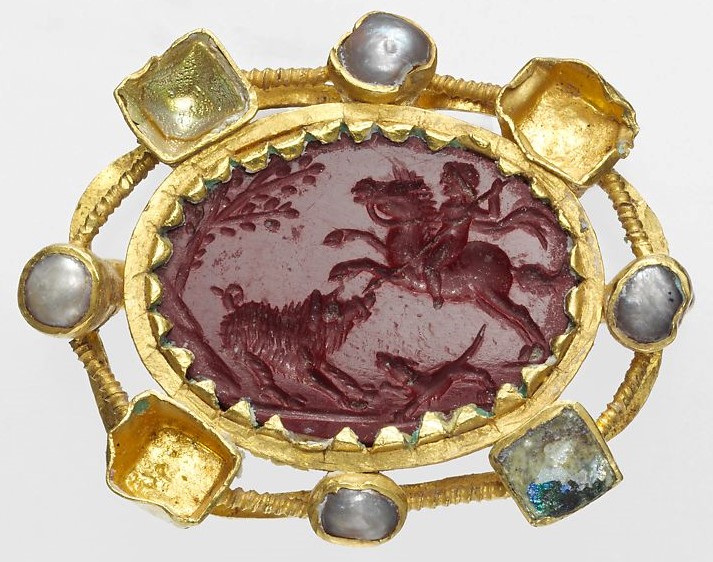 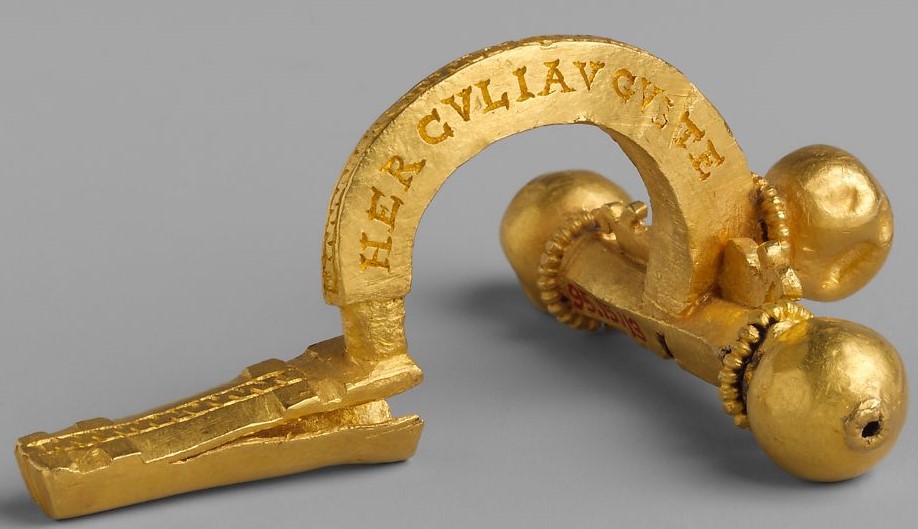 Roman gold brooch in the form of a bow worn by a soldier - HERCVLI AVGVSTE SEMPER VINCAS (May you always be victorious, Hercules Augustus!) by The Met

Appearances are primordial. Without them, how could people tell at a glance how polite they are supposed to be with you? Your clothes, hairstyle, and jewellery have an enormous importance as a marker of identity, status, and even moral character.

Most of what I have describe is real Roman history, though mostly accurate for the early empire period. In my setting, the year is 344, but my Romans went back to earlier trends because the new imperial dynasty wanted to present itself as the heirs of the Julio-Claudian dynasty.

Written for PanthersEye's unofficial fashionable treasure challenge, although I had to divide the article in two to fit the word limit. This half is the one I'm actually submitting.
Please Login in order to comment!
Powered by World Anvil