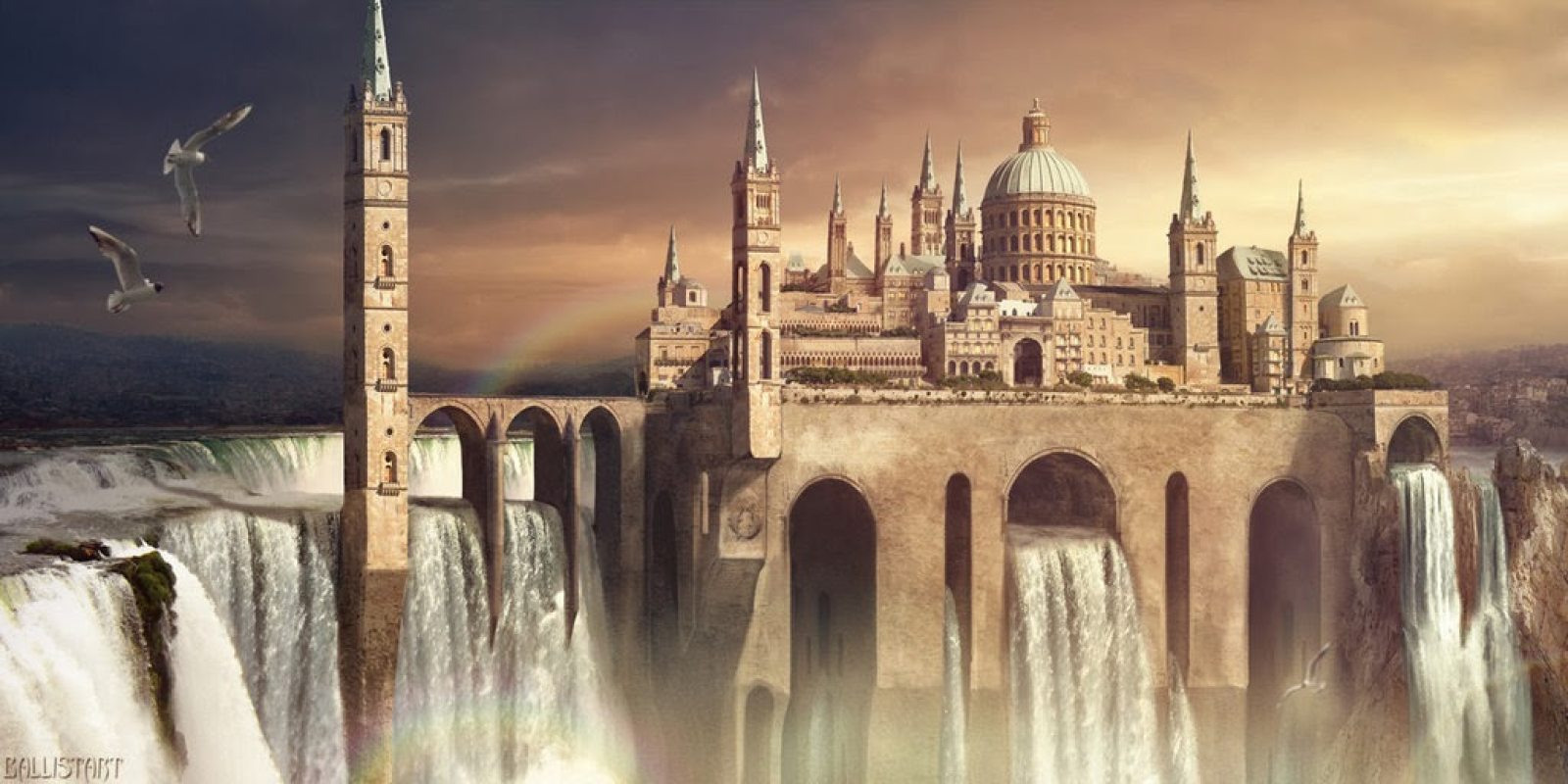 Each year, there is a “Flight of the Brave” festival. Competitors build flying machines and launch themselves from the top of the cliff. The goal is to glide or fly successfully to the other side of the bay. No one has been successful. Healers are always on hand to patch up the competitors that plunge into the ocean below. This festival is held when the sun sets perfectly in the opening gap of the lagoon.

The School of the Kraken has its seat of power here. However, the School is losing the public’s faith and patience. This city is hell bent on progress and science. The Kraken School is accused of being corrupt and trying to gain too much influence in matters not of their concern. The Kraken school is known for it's healers but recent medicine and advancements have called their practices into question. The leaders of the School are trying to grab power since they seem to be losing it. However, the School is still a huge draw for people outside of Rochia and the normal people of Rochia love the school, since they often do charitable acts and philanthropy. Their position is tenuous as the political climate of Rochia heats up.

The rival of the School of the Kraken is the Institute of Engineering, or just the Institute. It controls most of the politics and power in the city. A lot of their power comes from their oversight of the Ship Elevator. They can decide that the elevator is “down for maintenance” and leave ships stranded until their demands are met. The Institute does churn out brilliant minds. They are starting to push Rhunec into an industrial age. They generally frown on magic, but some labs are trying to combine glyphs and science. Some research is going into where the energy for glyphs actually comes from.

The city is famous for its rainbows. There can be as many as five rainbows at a time in the city due to the waterfalls. When the sun sets through the lagoon gap during the festival, the waterfalls are lit up with golden light and the rainbows are super intense.

The city clings to the cliffs and edges of the waterfall. There is a strip of land at the bottom of the waterfalls that is filled with homes, shops, docks, and warehouses. The town acts as a lift to get ships up onto the river for the route to the City of Glass. The waterfalls plunge into a deep lagoon that is a perfect port. The lagoon is so deep, no one has been able to get to the bottom. The mouth of the lagoon is narrow, making this one of the most sheltered ports.

All the buildings are colorful - painted red, blue, coral, pink, orange, and green. There are often motifs of fish, birds, and squid carved on eaves and painted on doors. The fountains take the shapes of mermaids and seahorses - the water pumps powered by the water wheels turned by the waterfalls. To get to the top of the falls, there are three main sets of elevators. These are loops of ropes and pulleys with platforms mounted between the guide ropes. The ropes are then pulled by the flywheels. The ship pulley is a massive structure dominating one end of the lagoon. When a ship wants to go up river, it sails directly into the waterfall. Giant mechanisms part the waterfall and start to turn giant flywheels on either side of the ship. Once the gears are engaged, the massive chains start to lurch and a a molded platform rises up from the sea bed to pick up the ship and carry it the 200 feet up the cliff. Once the boat reaches the top, gates close behind it and the water resumes its course, filling up the gate and floating the boat safely into the river. To go down, the reverse occurs.

The Economy of the City of Waterfalls is primarily on shipping and trade. They have a large fishing sector as well. Tariffs and tolls contribute as well, gathered from ferrying ships up to the river or down to the lagoon. Taxes are levied by the Mayor and the Elders. The Elders and Mayor are elected officials. Their currency is the rainbow stella. The city is famous for its rainbows caused by the waterfalls.

Rochians wear comfortable clothing and are heavily influenced by sailors and pirates. The seasons in Rochia are tempered by Ponticuppo Bay, but the winter bites and the summers bake. Rochians adapt to the weather and always have a cloak ready for the rain.

Lead by the Assembly of Rochia with Mayor Goldstein at the head. The assembly has four elected members.. They are all elected positions but the Institute has undue influence. Currently, there is one Elder from the Kraken School, two from the Institute, and one from the Lower City.