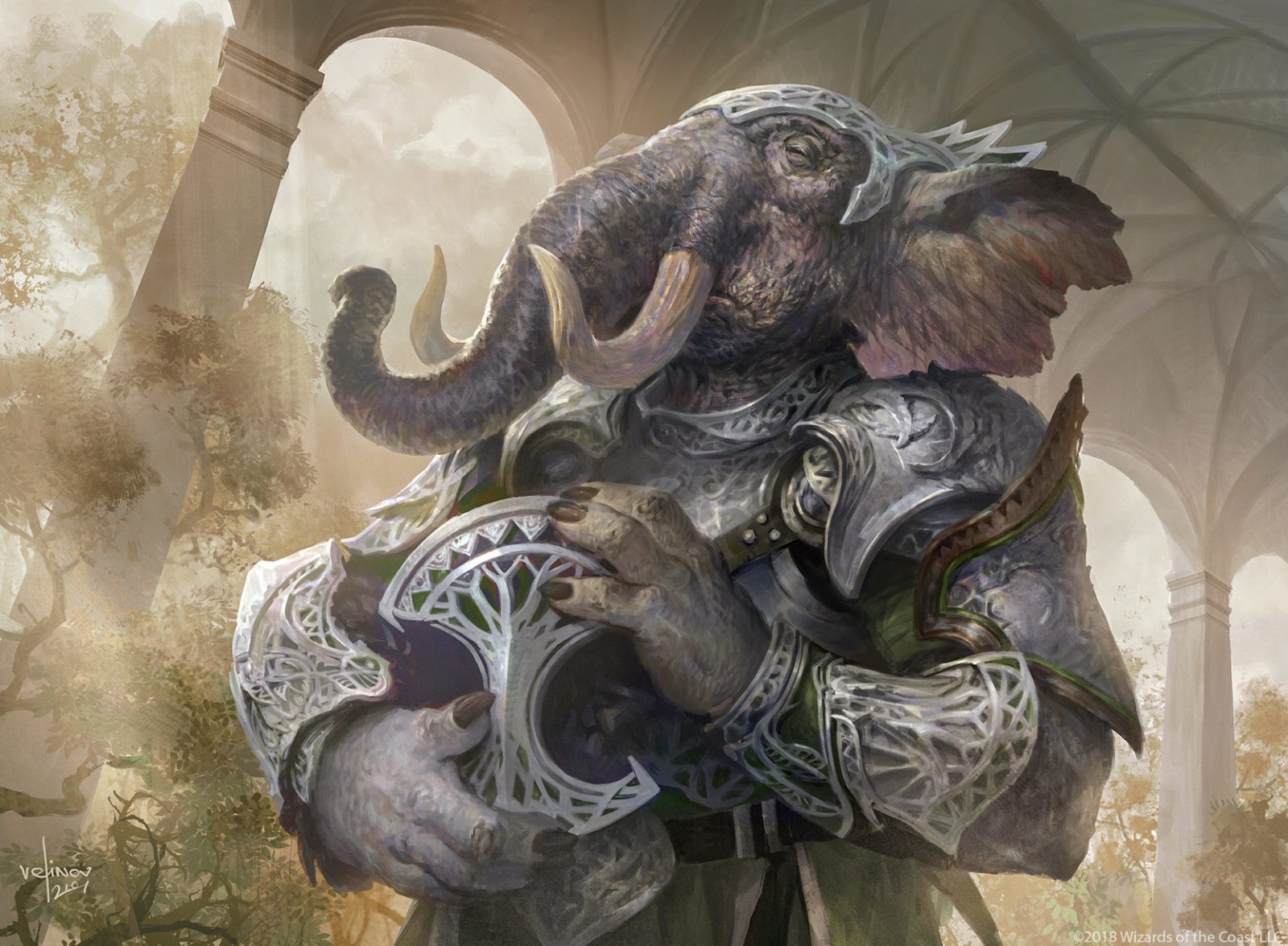 The humanoid elephants called Loxodons are often oases of calm in the busy streets of Ravnica. They hum or chant in sonorous tones and move slowly or sit in perfect stillness. If provoked to action, Loxodons are true terrors--bellowing with rage, trumpeting and flapping their ears. Their serene wisdom, fierce loyalty, and unwavering conviction are tremendous assets to their guilds.

Loxodons tower above most other humanoids, standing over 7 feet tall. They have the heads--trunks, tusks, ears, and faces--of elephants, and hulking bipedal bodies covered by thick, leathery skin. Each of their hands has four thick digits ans their feet are the flat-bottomed oval-shaped feet of elephants. Like that of an elephant, a loxodon's trunk is a useful appendage. In addition to providing a keen sense of smell, the trunk can be uysed to lift and carry even heavy objects. It can carry both food and liquid to the mouth, and be used as a snorkel.

Loxodons believe in the value of community and life, and thus are most often found in the Selsnya Conclave. Some find fulfillment in the cause of order by joining the Orzhov Syndicate or Azorius Senate. Loxodons believe that the members of the a group gave a responsibility to look out for eachother. Once they have joined a guild or bonded with other individuals in any capacity, loxodons devote themselves to maintaining that bond. They coordinate their efforts and are often willing to sacrifice themselves for the sake of the group. They expect reciprocal loyalty and commitment from the other members of their communities and can be severe in their disappointment when that trust is betrayed.

A loxodon's name includes subtle tones, produced in a loxodon's resonant nasal chambers, that indicate status. family connection, and community role. Since most non-loxodons can't distinguish these underlying tones, let alone produce them, loxodons often translate them into titles such as Hierarch, Revered, Grandmother, Healer, or Saint, when interacting with other races.

Age Loxodons physically mature at the same rate as humans, but they live about 450 years. They highly value the wieght of wisdom and experience and are considered young until they reach the age of 60.

Alignment Most loxodons are lawful, believing in the value of a peaceful ordered life. They also tend toward good.

Size Loxodons stand between 7 and 8 feet tall. Their massive bodies weigh between 300 and 400 pounds. Your size is Medium.

Powerful Build You count as one size larger when determining your carrying capacity and the weight you can push, drag, or lift.

Speed Your base walking speed is 30ft.

Loxodon Serenity You have advantage on saving throws against being charmed or frightened.

Trunk You can grasp things with your trunk, and you can use it as a snorkel. It has a reach of 5 feet, and it can lift a number of pounds equal to five times your Strength score. You can use it to do the following simple tasks: open or close a door or container; grapple someone;or make an unarmed strike. Your DM might allow other simple tasks to be added to that list of options. Your trunk can't weild weapons or sheilds or do anything that requires manual precision, such as using tools or magic items or performing somatic components of a spell.

Keen Smell Thanks to your sensitive trunk, you have advantage on Perception, Survival, and Investigation checks that involve smell.

Languages You can speak, read, and write Common and Loxodon.