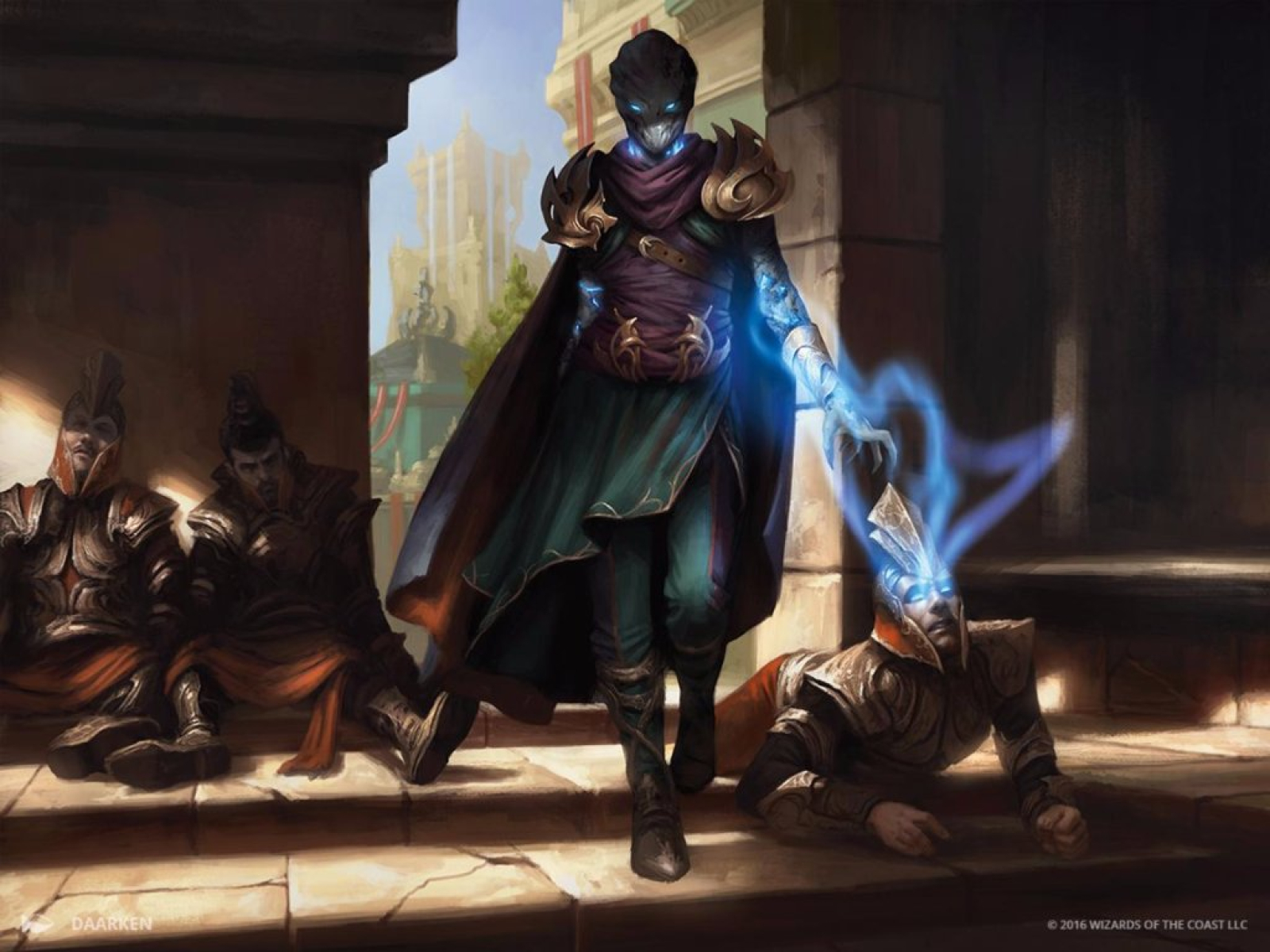 Originally by Wizards of the Coast, Magic the Gathering. Cover art by Daarken. Article and somewhat modified lore by Shpjokk.

Thara, ancient god of storms and the arcane, died in fierce battle and her divine corpse crashed on the mortal plane, creating what would become the land of Sanctuary. Gradually, as Thara’s corpse became one with the valley, storms started to become more frequent in the region, and eventually the entire area was covered in storms almost 24/7. From these storms came the aetherborn. Some speculate that the Aetherborn came from a dying wish of Thara’s, some that it is her spirit still trying to fight on, and some suspect a magical discharge every few times lest the storm cover the entire continent, maybe even the world.
Nevertheless, the Aetherborn are a by-product of these storms. They are birthed as adults, with prior knowledge of the world and fully matured. Some are also born with a purpose imprinted in them; Something that tells them that there is a destiny or a path that they must follow.

Aetherborn are bipedal creatures, with skin that is almost like a soft carapace. Within they are made of pure magical energy, which cracks through their skin and shows as they age.

Aetherborn are tall, thinly built grey creatures, lacking visible mouths and only having two holes for noses. Their eyes glow with aether.
As Aetherborn age, their skin will crack open more and more, revealing the raw magic within them, glowing and pulsing with life.

Aetherborn are unable to reproduce, and are also genderless. They are born fully mature through the Aetherstorms.
Aetherborn do not feel emotions the same way normal sapient creatures do, as they are effectively encapsulated energy, and as a consequence many attempt to feel joy through wanton behaviour, or anything that gives them positive emotional feedback. Some magical spells and rituals, as well as in rare cases certain physical contact, can give an Aetherborn stimulation akin to the physical act of sex, but those who look for magical means often find the price to be far above reasonable levels, though Aetherborn are willing to pay regardless.

Aetherborn do not have any need for food or water. Vampiric Aetherborn are able to steal life energy to extend their life, but have a need to drain at least some energy every day.

The Aetherborn completely lack an individual social structure. Instead, they are offered to be integrated upon birth into the Dragonborn society, and if they refuse, they are provided simple travel gear to aid on their way.

In some horrid cases of history, particularly despicable individuals have drained Aetherborn of their mana for temporary bursts of power.

All aetherborn are without mouths, and their nose are but small holes. Their eyes however, are very human; It's easy to see an aetherborn as beautiful, just as easy as it is to see quite an uncannily creepy one.

Mainly based in Sanctuary, it's common to see Aetherborn travel the world.

Aetherborn are sapient, often (but not exclusively) with a higher-than-average intelligence, often thanks to their inborn knowledge.

Aetherborn cannot eat or drink, as they don't need to. Despite this, they can speak, though their voices have an echo to them. They can see and hear as well.

Aetherborn name themselves similarly to the Dragonborn, and often hold descripitve names not unlike a Tiefling's virtue name.

Throughout Sanctuary, Aetherborn have, together with Dragonborn, set up many entertainment and pleasure facilities, such as brothels, theaters and simple bars and taverns. Aetherborn-driven brothels especially hold a very high standard, and offer varied and exotic (though often magical in nature) experiences, to the point where some towns and cities in Sanctuary hold their brothels as their main attraction for tourists to visit.

Aetherborn often wear very extravagant clothes that cover up their entire body, because they all look almost the same in physical appearance (though their voices vary). To differentiate faces, some Aetherborn tend to wear intricate masks to give themselves a more personal feel. This can be both to blend in more easily amongst other creatures, but just as well simply be a fashion statement.

Aetherborn are all born without a sex. Biologically speaking, they all lack genders. However, because genders are such an entrenched concept in the Malkorian society, Aetherborn often choose their own gender pronouns, though there are those who decide against choosing at all.

Extravagant, daring and/or lavish experiences is what most greatly intrigues the average Aetherborn. It's not unusual to arrange for grand parties to impress one.

Aetherborn are acutely aware of their very rapid mortality. Though many would wish for a longer relationship, few ever look for it. Quick, fast and passionate relationships are often what Aetherborn look for, though they cannot engage in sexual intercourse through normal means.

Aetherborn speak Draconic and Common, mostly, as they are based in Sanctuary.

Aetherborn often dress in as extravagant and lavish clothing as they can. Rarely does one see an Aetherborn in armor or in bland colors, but there are always exceptions.

The main creed of an Aetherborn is and has for centuries been "Live fast, die young!", to the point where it's used often as a farewell phrase between Aetherborn. One says the first half, the other the second.

Well-aware of the vampiric abilities Aetherborn can acquire, the society of the Dragonborn outlawed the ability and imprison Aetherborn who pose a danger to society for the rest of their lives. While it doesn't stop many to search for the means to acquire such an ability anyway, it's nevertheless frowned upon by most other sapient races, as well as a few other Aetherborn. It is worth mentioning, however, that Aetherborn understand far more well when their fellow kin succumbs to temptation, in order to live longer.

After the Dragon Wars began, the thunderstorms that surrounded Fort Sanctuary intensified tenfold, and seemed neverending. The storms grew increasingly savage, to the point where in the last few months before the Event, the Fort was cut off from all supply routes completely. Then, one day, a terrible lightning crash sundered Fort Sanctuary, and the storms abruptly calmed down, only serene clouds floating in the skies.
From these storms, the first Aetherborn came, and moving forward, storms not unlike these (but not nearly as intense) would continue to rage across Sanctuary, constantly birthing new Aetherborn. Both Bahamut and Tiamat managed to recruit Aetherborn into their ranks during the war.
After the war, Gilgamesh took the Aetherborn under his wing, to teach them peace and freedom. He sealed off Sanctuary, and for a long time dedicated himself and his people to the study, understanding and social integration of the Aetherborn.
Today, Aetherborn are quite common to see all across the world; They are renowned as traveling minstrels, adventurers and thrill-seekers, doing the best they can to experience life at its utmost through their short life span.

Kalni, Master Engineer - An Aetherborn that journeyed to the dwarven lands faster than anyone, and has been said to have been able to create an artificial heart able to process aether from the air around them, effectively granting them a mortal life cycle equivalent to a dwarf. Their heart has been a relic to be sought for many, many centuries, and many more than just Aetherborn continue to search for it.

The Aetherborn hold very good relations with the Dragonborn, and the Sanctuarian society is intricately in need of both races to properly function. 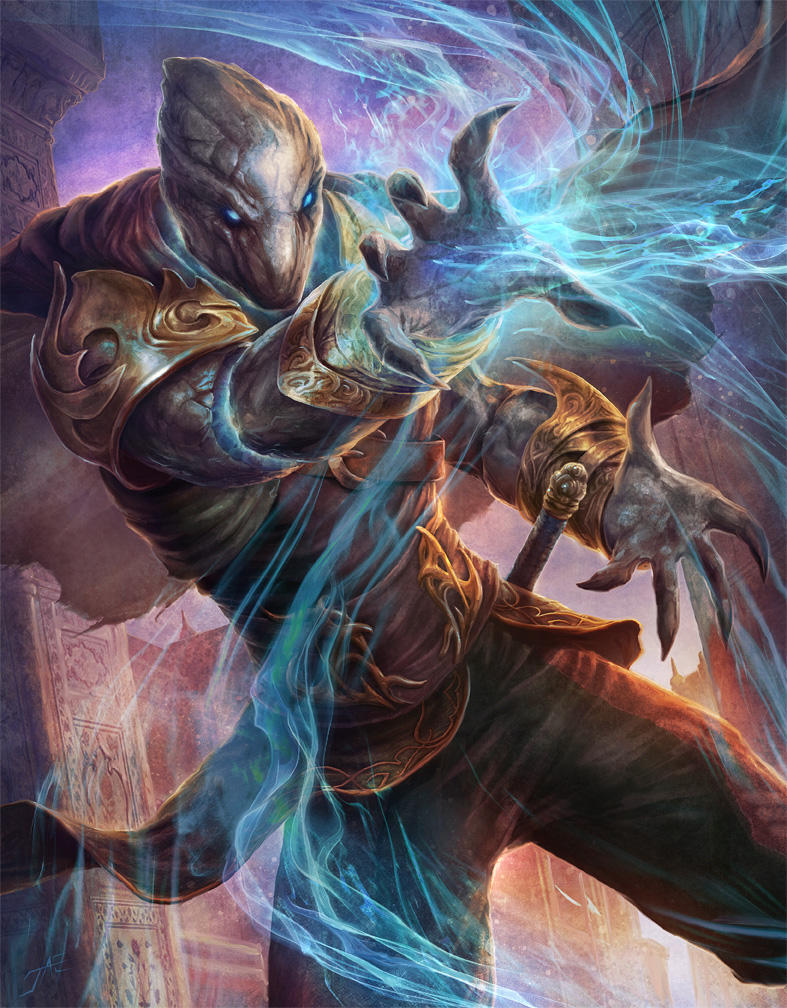 Origin/Ancestry
Magical/Elemental Humanoids
Lifespan
Up to 2 years w/o enhancements
Conservation Status
Due to the short lifespan of the Aetherborn, there are those that actively try to extend their own lifespans. Some have heard the tales of these Aetherborn, and their terrifying vampiric powers. Some Aetherborn cravenly seek this power, others (and many nonaetherbrn) are scared of it.
Average Height
Up to 2.1m.
Average Weight
50-60kg.
Average Physique
An aetherborn's physical structure is always the same, regardless of their actual physical strength. That is not to say that all aetherborn are weak; Their physique can simply not change, but is determined randomly at their birth.
Body Tint, Colouring and Marking
Aetherborn all carry greyish skin, and their eyes are often blue. This can shift depending on their usage of magic.
Often, Aetherborn add tattoos and tribal markings as personal touches, not unusually to their faces.


Remove these ads. Join the Worldbuilders Guild
Aasimar
The People of Malkor
Dragonborn