The details of the Battle of Censure       Build up       There were four points of interest in the camp of Ceriestrident.

1.The Isle of Valon provided a key communications locus in the form of the Heraldic centres at Embrace, the Koss of Lore and the Keep of Dominions (1/2 mile outside of Censure). I shall detail these.


Embrace seemed important as a potential embarkation point for any mainland travel of Ceriestrident’s group. It was a matter of speculation as to whether there would be travel beyond Valon but facts were not available on this point. Safer to believe that the potential existed for a specific purpose that would take him or a number of his followers to the mainland.


The Koss of Lore has a strategic position within the Heraldic cause. The Library Keep had a portal used by senior members of the Order to permit them travel off-world. Ceriestrident may have already known this and made it a target.


The Keep of Dominions holds accumulated information of the nations of Valon specifically. Ceriestrident had not shown interest directly in this but his choice of landfall did highlight the keep’s proximity. Censure’s importance will be detailed separately.

I intervene to note that the Keep of Dominions had a collection of works centring on the use of the bane swords in the founding of the nation of their usage and deployment as well as the record of their movements across Valon and in who’s hand , may be one reason for this incursion. GA Sluatake
2. Baktorophun. The mechanical warmount created by Count Brass’s sourceror, Hako Keloxantee. At the time of Ceriestrident’s landfall the construct was in Censure for upkeep. This construct can carry thirty men-at-arms as well as its crew of seven. (For more detail see the seminal work of H. Sifercog; Contructs of Logresse and the Lunars. Keep of Items, Modureye).

3. The Verdant of Censure is quite low if Valon is looked upon as a whole. While the numerical averages would lead one to assume a level of 7 and 1/2 might be expected, Censure sits more at 4 and 1/2.* notable researches were made into this. (in H. Thramonock’s work; Censure’s Great Mystery. Koss of Lore).
Ceriestrident May have some knowledge of this anomaly and used it to indicate a suitable place for his landfall (see Cadavivva).

*the reasons for Censure’s lower than expected Verdant level are too long to describe here. Suffice it to say, that the Orbed Sea’s influence is strongly felt in Censure and this more than the other reasons commonly spoken of is primarily responsible. Whatever it is that lurks in the sea is happily not at the surface as yet. Investigations might be wise and unwise in equal measure.

4. Eleathrine of Eshuan. The daughter of unknown parentage has resided in Dalsem for some time {thirty-seven months}. At the time of Ceriestrident’s landfall she was visiting Censure. She had made an acquaintance of Sir Jaguraunth, Knight of Renown. Sir Jaguraunth had some skill in the field of mechanical devices. The mills of Censure were of particular interest to him so he had settled in the city for a time. Eleathrine has become someone the Knight valued due to her innate understanding of mechanical works. There does not seem to be a romantic involvement between the Knight and this damsel. Ceriestrident marked her well on his previous appearance on Logresse (see; The Desecration of the Ingen Valley and The Vale of Lepers, H. Retaking.) He appeared to have some reason to select her for his personal interest.
Ceriestrident’s Command       I am aware of the muddled nature of Ceriestrident’s origin so I shall refer to him as a ‘man’, but it should not be thought this is some final evaluation as to his racial heritage.       Ceriestrident brought with him, a host of one hundred. Most of these would be considered men-at-arms. Fully sixty were of the type that we must ascribe menial. This being said these menials were equipped strangely. Their armours were empowered by strength akin to the Verdant. Further researches might be in order to determine the strength’s nature. What matters in this history is that these armours did function as designed. Weapons striking these armoured menials were liable to undo ageing. Several weapons recovered at the sites of battle were shown to have serious cracks or total failures within them.       These soldiers also were heard to occasionally shout about shields although no shields be they rounded nor kited were seen among them. It could well be they speak of sourceous varieties of shielding. This might mean some of their commanders are casters but that is unproved.       These soldiers use lances not dissimilar to those wielded by the Knights of Br’Tagne. There are certain differences witnessed in results involving them, however. Instead of superior chances for damage as the Br’Tagnese weapons create, these ‘Off-world’ lances* create superior chances to hit and superior chances to create their Black strikes.           *To offset a likely confusion between these two similar yet differing weapons I’m am suggesting strongly that these off-world lances be titled, Darkspears from henceforth.         The captains of these troops carry smaller weapons of similar results though not as strong in damages. These captains also carry incredibly sharp swords. Grievous wounds are far more common on those not protected by armours. While even metals form a decent guard against them, suffering only somewhat, the damages to unprotected or leather armoured targets are extreme — something like three times the expected damages can be witnessed affecting those hit. Examination of these swords shows that their edges have the finest of drawn sharpness on them. With great difficulty with regular eyesight, the edgemost portion of these weapons can be seen to have a dark line, as finest strands of silk, along it. Is this a filament of Black? It might be a trimming of some black mineral or a result of a particular, Black(?) whetstone being used to sharpen the swords.       Of the commanders there are four individuals. None of these are the equal of Ceriestrident’s capabilities. They do pose a real danger to Knights, even those of an Order, or of Renown. Each is singular but they share some trappings that identify them as men of command. Primarily this is their similar armours. All four have played armour of black and red. Full helms that have strange visors* are another commonality. 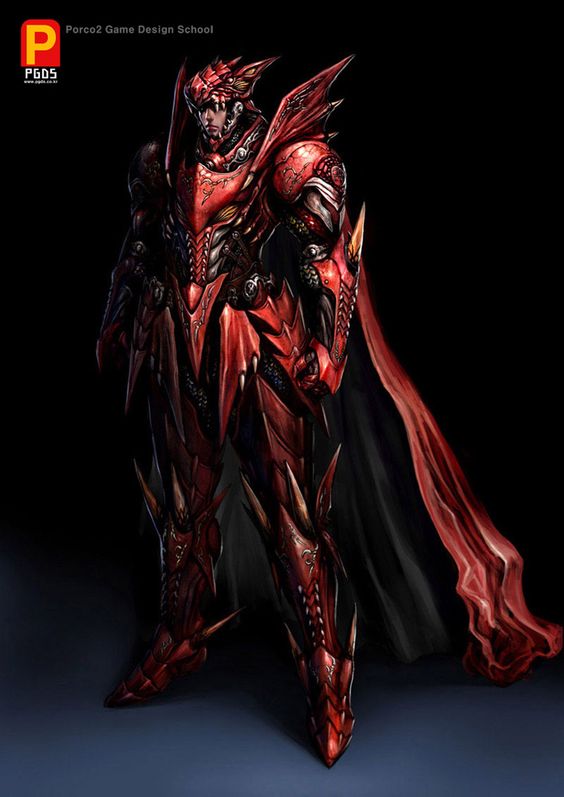 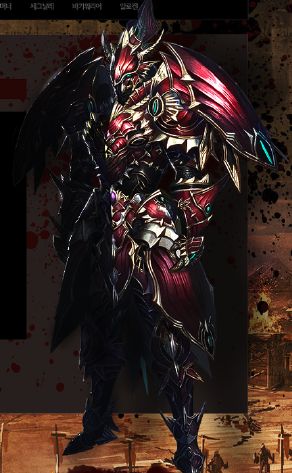 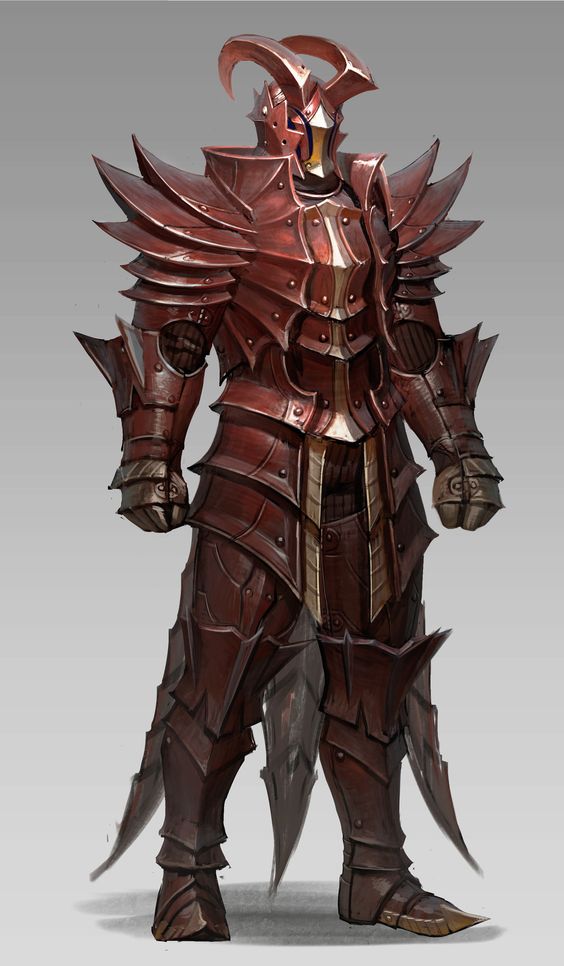 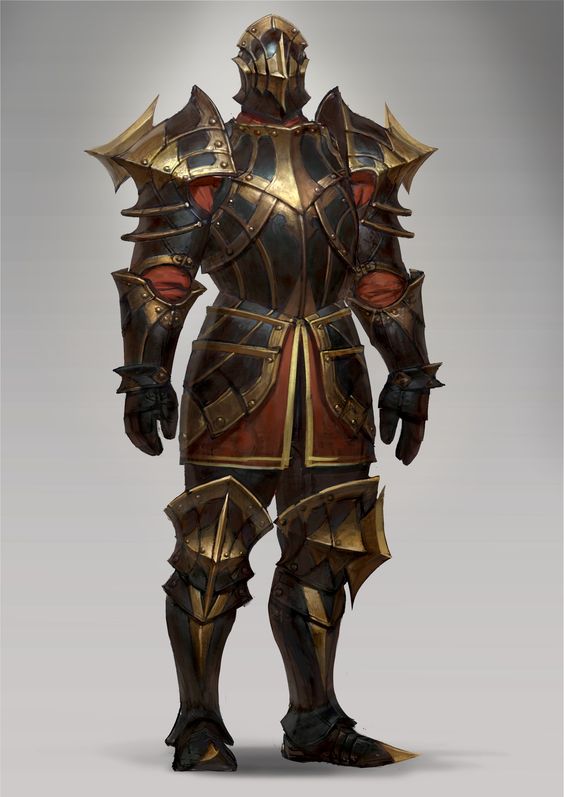