Splashes of color on a dark canvas draw the eyes in as one follows the lines that twist into unrecognizable shapes. To the untrained eye, there is nothing special about this painting, a swirling mass of nothing practically splattered onto something and hung for all to see. But to those with a spark of magic, those with a practiced eye, this is not just simply a static painting. The real magic begins when one chooses to look closer and take a moment to appreciate what is before them.   A second passes before the shapes begin to move, the once chaotic splashes turning into the shapes of Dragons. The forms move across the canvas, their painted forms moving and dancing to a rhythm that only they can hear, putting on a show for those most deserving. Bright colors become Dragon Scales and wings, moving with the grace of the Metallic Dragons of the north.   Little is known about the creator of the Dancing Dragons, but many believed that he had an odd sense of humor. Those without patience are not rewarded with the true nature of the painting, an eye for art is necessary to understand the unlying meaning of the vibrant colors. The magic behind the movement has its basis in Indigo Magic, but this isn't truly what magic is used. It is a mystery that will forever remain as the painting waits in the halls of Alfensil.

There was a great deal of confusion about this painting when it originally came to light. The painter was relatively unknown and his style was far more abstract than the world was used to. Early on, this painting was relegated to a corner of some building in a small village somewhere in the Elven Kingdom. It was a long-forgotten relic before someone realized the true magic of the painting and it was moved to Alfensil for study.

In the centuries since the painting was moved to Alfensil, it has become quite the conversation piece. Many have viewed it on display in the royal chambers as well within the galleries of the Unending Scroll. All manners of people and Scholars have traveled from across Isekai to view the painting and help to unravel the mystery of its magic, but still, to this day, the true nature of the Dancing Dragons is a complex secret.   Those that enter the Unending Scroll as students may find that they have been given the impossible task of solving the magic behind the painting as an extra task of their schooling, stretching their imagination and understanding of magic. Headmaster Alexander Cross of the Starlit Academy often references the painting in his teachings of the colors of magic because of the intricate nature of the magic behind the art.   Many artists have attempted to recreate the style of the Dancing Dragons by imbuing their paintings with magic or utilizing Arcane Dust in their paints or inks, but so far, no one has been able to replicate the magic behind the painting fully. Small illusions and the like are possible, but not to the extent of the sentient Dragons that fly across the canvas. 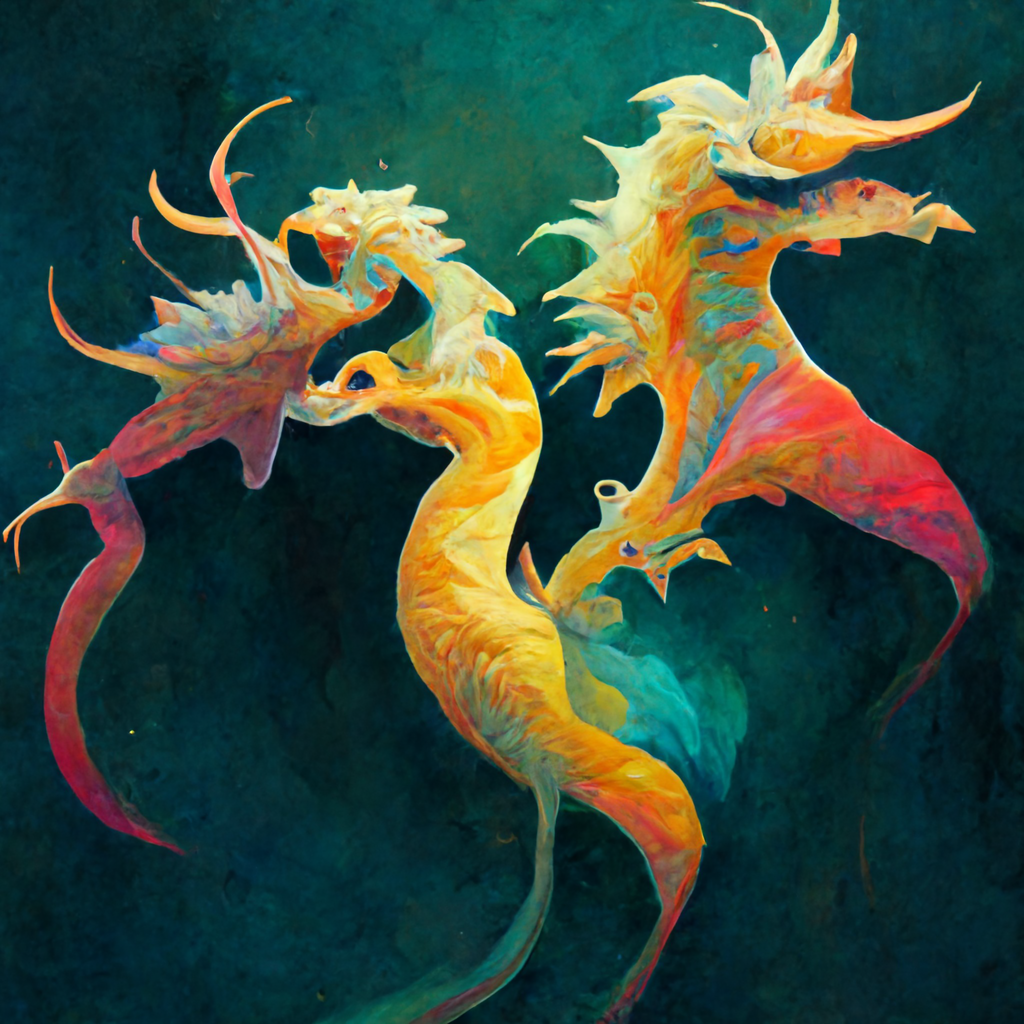 Dancing Dragons by Image via Midjourney, created by Riverfang
One of the most famous painings from Vóreios, Dancing Dragons seems to be little more than random splashes of color on a canvas, but the magic of the painting reveals itself the more one looks at it.
Type
Imagery, Artistic
Medium
Canvas
Location
Alfensil
In response to the prompt Describe the most famous pieces of art in your world. What made them so famous?

I witnessed an entire story before my eyes. An entire story from the careful production, choice, and placement of splashes of color! I just need to work out what it meant. Not here though, the other onlooker seems to be concerned about my present state. - Nemo, World Traveler