The Treskute has probably ended up like my first marriage; sunk.
— A New Point Harbor local

The Treskute was the ship that potentially travelled to the Edge of the World, however, it has yet to return from its last voyage. Most think the ship has sunk, but some do believe the ship actually reached its destination.   Captained by Milladamenus, the ship was used to sail to the Edge of the World and back. Uulia Frontina was also onboard the Treskute when it last travelled towards the Edge. Uulia was the Scholar of the College of Wonders who was studying the Edge of the World.   However, there is some controversy as it is rumoured Uulia was expelled from the College after siphoning funds from the institution for her research, especially as the college denies that they backed Uulia's research in any way.

The Pidgeon-class ship was built by Pearson's Shipwright Company This was a type of ship, built for sending messages across the sea; however, it has a reputation of being slow, but sturdy. With these traits, the ship has very low maintenance compared to most other designs.   As the ships were easy to maintain and could endure the Atharian waves, the Pidgeon-class in particular is the most common ship found in the whole world of Atharia. Very fitting for its name.
The ship was a Pidgeon-class vessel, built by Pearson's Shipwright Company in New Point Harbor. However, it is said that the ship was given a few modifications, especially after needing more repairs than what an ordinary Pidgeon-class vessel would typically need due to the Treskute's mission of studying the Edge of the World.   The Treskute itself kept its original 6 decks; the top deck, captain's deck, main deck, gun deck, crew & cargo deck and finally the basin. After many trips to the Edge, the captain has commissioned the ship to be given more frames and pillars to bulk-up the ship to survive the mythically harsh weathers of the Edge of the World.

Captain Milladamenus had commanded the Treskute for over 9 years until her last voyage. Milladamenus was a brave Kalruuthian who left her mountainhome to explore the world, along with her trusted Kalruuthian Cat companion, Pebbles. When she saw the ocean for the first time, she fell in love with the sparkling blue waves. Since then, she had always wanted to command her own ship and crew.

After years working as a crewman for various ships, Milla, as she soon became known as, saved up enough coin to purchase for a ship (the Treskute) and a crew. From then she delivered cargo from port to port, until she met with Uulia Frontina who had a propsition for her. 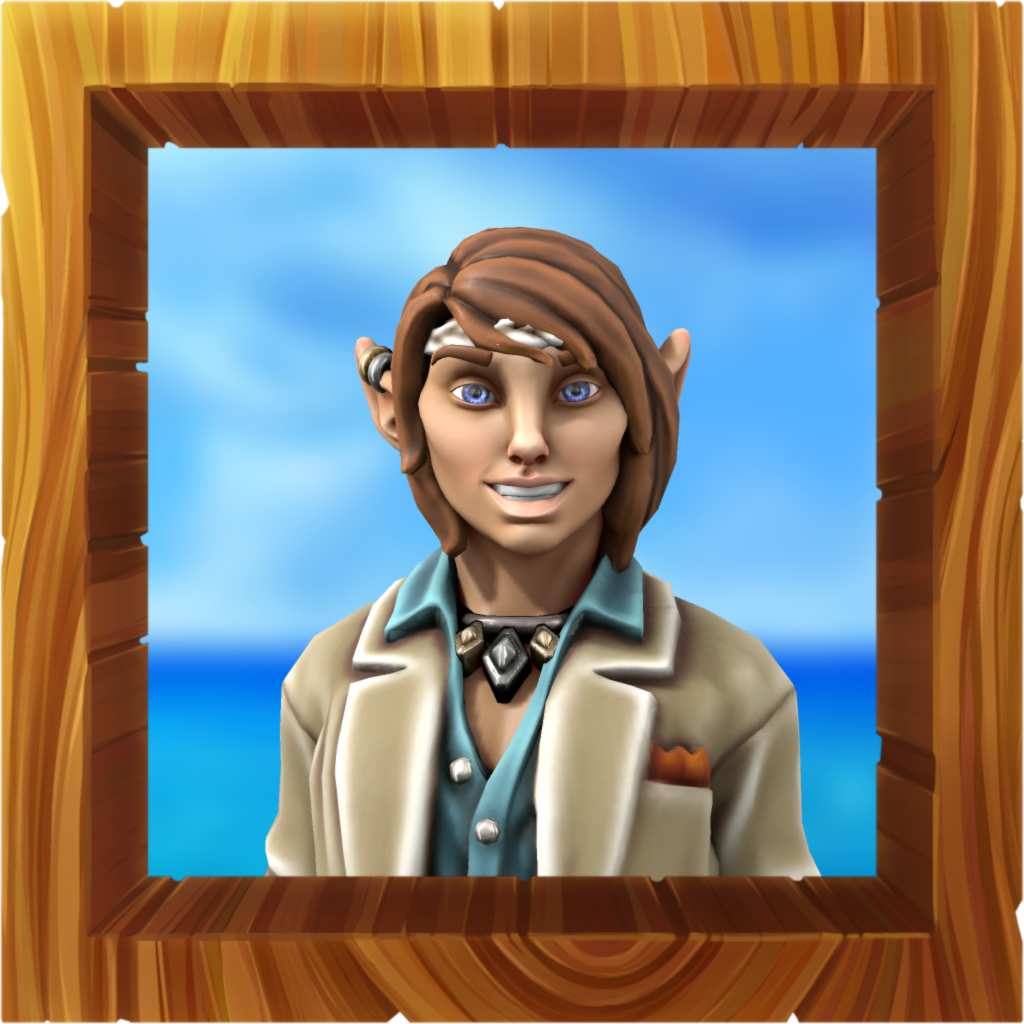 Uulia Frontina by Heffe
Since a young Elfkind girl, Uulia Frontina was always fascinated in what lies beyond the horizon; or so she had told those at the College. In fact, here background is unknown, but it is suspected she was from the Fenayan Jungles.   As the story goes about the ship that went to the Edge, it was Uulia who proposed the expedition to Captain Milladamenus. It is this proposition that many refer to as the Edgy Pitch, which since then became an idiom of those sharing big ideas.

Uulia Frontina and Captain Milladamenus met in the Gentle Bowl Club in New Point Harbor. Not only did they meet, but it is said this was also when Uulia made the famous Edgy Pitch to Milladamenus, who agreed, of course.   Within days, the two and their crew set out towards the Edge of the World. Much like those before them, they were met with great peril. The stormy conditions and the violent sea caused an incredible amount of damage. However, the ship just bearly made it back to port.   This was not their only trip, as using what influence she had, Uulia had managed to gain the necessary funds by the College of Wonders to continue her research. Reluctantly, but also now more well-off, Captain Milla agreed to be hired by Uulia; especially as Milla was determined to not let the Edge beat her.   Eleven more attempts were made, all faced with the same fate. Whilst Milla became more and more frustrated, Uulia was more and more curious. She had learned so much about the Edge of the World, naming her perhaps one of the most famed Scholars of the College. However, murmers and whispers speak of the College becoming impatient. In fact, many Scholar claim that Uulia is in debt with the College.   Either way, Uulia, Milla and their crew set out for the twelth time; to then never return after that.

I'd like to think they have made it, but then if they have not yet returned, what is beyond the Edge of the World?
— Vincentis of Midon, the former Mentor of Uulia Frontina. 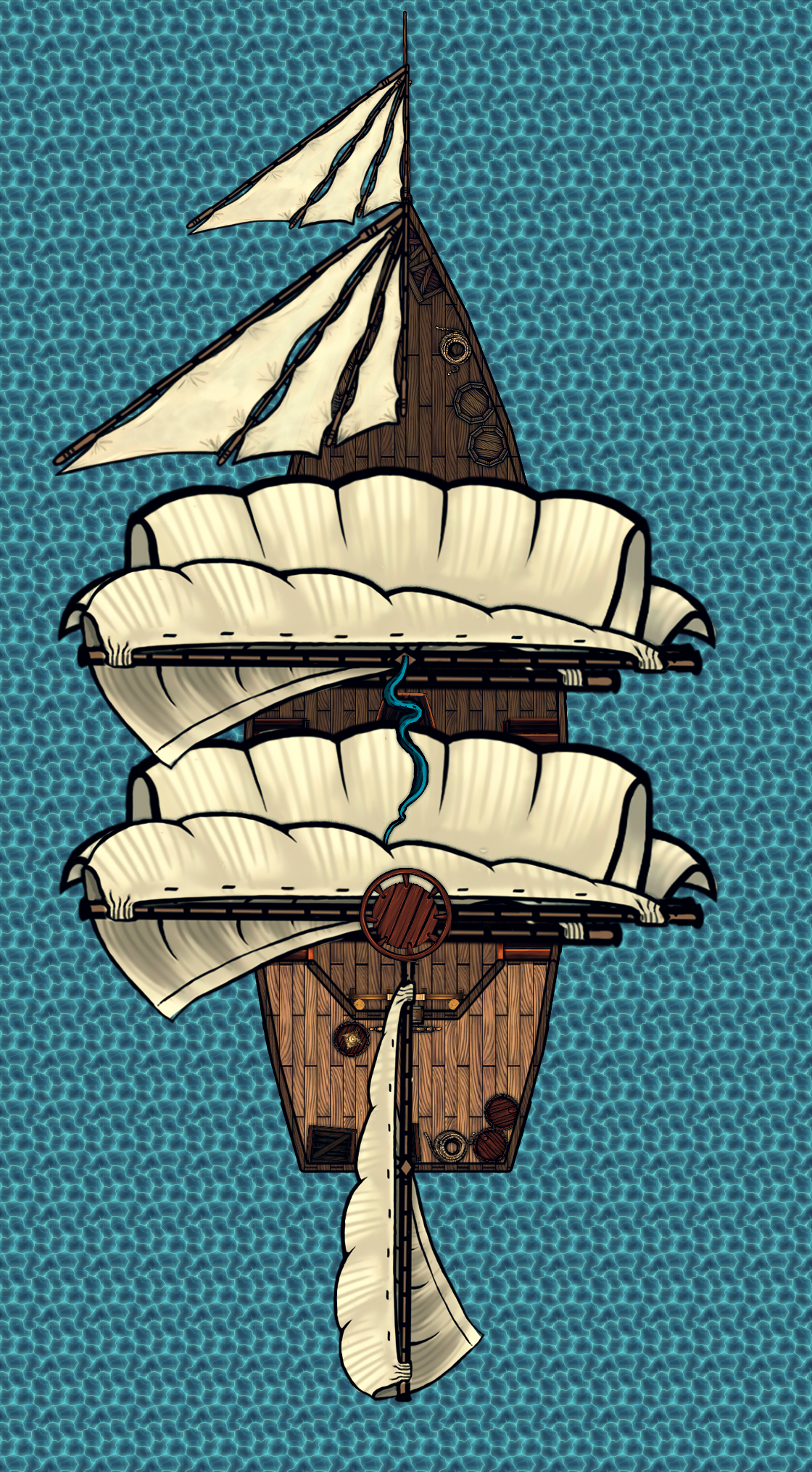 A small shipwright company based in New Point Harbor. It is renowned for building types of ships such as the Pidgeon-class, the Sparrow-class and the Hawk-class vessels. All of these ships are built to last, and Pearson (the shipwright) claims the ships can endure anything.

Edge of the World

Upon the horizon around the World, is what's known as the Edge of the World. According to the findings of Uulia Frontina before she became missing at sea, the Edge is not a great waterfall that spans around the world. It is a barrier of steep waves with a crash of neverending storms and strong winds which mysteriously always tries to force the ship back around. What lies beyond the Edge is a mystery to all; except, perhaps, the crew of the Treskute.

New Point Harbour is one of the largest cities of Atharia. Within it is countless warehouses, inns, marketplaces and churches of the Order. However when people mention this city in casual, or any, conversation; they speak about the Sweet Snow which is created and sold in the Sir Aye Cream Parlour.

The place of Arcane Study, the College of Wonders is located in Empire City, the capital of the Lorlundian Empire. This is where aspiring Scholars and Mages go to learn the mystical of Magic.
Treskute
Open full size
The Treskute is the ship that went to the Edge of the World and is yet to return.
Shipwright Challenge

There is no galley! How do they eat?   joking aside, well constructed article and amazing job on the map. Hopefully none of the messages sent by the pidgeon-class were too time sensitive, but more of a "as long as it is delivered" sort.

It turned out as a fine article Heffé. After seeing you build the map on stream, it was nice to read the whole story.