Minotaur, like most other giants share their origin on Varthea. Long ago before the orcish wars, Minotaur separated themselves from their larger cousins. Minotaur society is much like the Zugush orcs in that they keep to themselves and have a very tradition based culture and rely heavy on their tie to gullonde through their spirituality and grazing on the many varied plant life among the northern basin of Ugela. The geography has made it difficult for the giants to impose any sort of tyranny upon them like Orcs in the past. A clan of Minotaur in the past helped defend the Orcs in one of the most crucial times during the slaving period. These Minotaur were hunted ruthlessly and treated as traitors by the hill giants but in the end the Orcs prevailed starting a new agreement between Orcs and Giants. The Minotaur have had many ups and downs with the Orcs since the slaving period but they still maintain trade with one another.
Minotaur typically range from true neutral to chaotic good/chaotic neutral. Male Minotaur typically mature to a height of 6'10"-10ft tall and range from 300-620lbs. Female Minotaur from 6ft-8ft and weight about 260-500 lbs. They have fur colors ranging from pale white to dark black including brown, tan, spotted and splotchy. They have a bulls head and snout and typically a soft flowing mane down to their middle back. Their upper torso and legs from the upper thigh down typically have a similar but shorter fur. Minotaur are naturally very muscular and possess supernatural cunning and stamina. There are many legends of evil Minotaur known Majotaur who have been hideously deformed and corrupted by evil magic to be larger more brutish beasts. Minotaur are typically calm and move about with a modest stride but are not to be underestimated. Minotaur are extremely difficult to calm once they have become angered and are a force to be reckoned with. The Minotaur have a caste system but most maintain the same rights and it is based more on vocation than kin. The warrior caste of Minotaur are known to wield enormous greataxes that pair well with their long limbs.

Surnames: Minotaur do not typically have a surname and if they do it is usually a mantra or nickname. For example Garrak Steelhide got the name Steelhide from being able to shrug off heavy wounds in combat and fight even harder.
Ability Score Increase: +1 to Wisdom and +1 to Constitution.
Age: Minotaur fully mature physically by about 20 years old and typically live to be 100 years old with the maximum age around 125 years old.
Size: Medium. (In lore they are large)
Speed: 25 feet.
Minotaur Training: Minotaur gain proficiency with all simple weapons and Minotaur Axes.
Scent: Minotaur can detect creatures within 30 feet by sense of smell. If the creature is upwind, the range increases to 60 feet; if downwind, it drops to 15 feet. Strong scents, such as smoke or rotting garbage, can be detected at twice the ranges noted above. Overpowering scents, such as skunk musk or troglodyte stench, can be detected at triple normal range. This only detects the presence of a creature, not what it is.
Languages: You can speak read and write Common, Jotun and one of the following 'Orcish or Primordial'
If you chose Orcish: You gain proficiency with the Battleaxe, Maul, and Heavy Crossbow.
If you chose Primordial: You have advantage when discerning any ancient carvings or stone script. You can tell the origin language even if you cannot speak it and can tell whether or not is is an incantation. 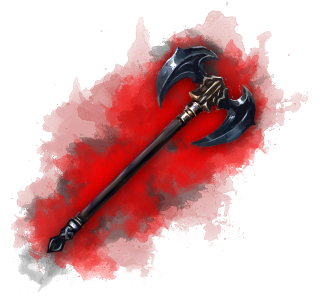 1d12 - Reach(Two handed only), Versatile 1 handed (1d10 16str+) Price 10gp Minotaur axes are wide and light but razor sharp. The haft is between 4-6 feet long and made of hard wood from northern Ugelan forests. A player who wishes to wield a Minotaur Axe must use a feat to gain proficiency and spend 3 in-game weeks training with a Minotaur who is willing and able to train them.
War-horned Minotaur
The warrior caste of Minotaur culture. War-Horned Minotaur are among the top 2% of all Minotaur. They almost always have thick, strong horns and can use them with great effect in combat.
Combat Prowess: Damage you deal with physical attacks is increased by 1.
Horn Attack: Your horns deal 1d12 damage on a successful attack but you can only attack with them once during your turn. Once per long rest: You may make a single horn attack as a bonus action. Any creature that is hit with a critical attack from one of your horn attacks becomes grappled and the damage is maximized (24+applicable bonuses). The DC (athletics) to escape your grapple is equal to your strength score. You may release this grapple as part of your movement for free.

Plains Minotaur
The foraging and hunting caste of Minotaur which comprises 75% of all existing Minotaur. These Minotaur are excellent hunters and survivalists. They have roamed the plains from the west coast of Ugela all the way to the forests of Lindolen.
Ability Score: +1 to Wisdom and +1 to Dexterity.
Striding: Plains Minotaur gain +5 to their base movement speed. They do not provoke attacks of opportunity from creatures they have struck in combat on the same turn.
Master Hunter: Plains minotaur gain proficiency in survival. If you already have proficiency in survival then you gain expertise.

Steelhide Minotaur
Steelhide Minotaur are a rare anomaly. Only 1 in every 10,000 minotaur will grow to be a Steelhide. They have an unusual hide that can shrug off weapons and attacks that would mortally wound a normal creature. They wear their scars as badges of honor and willingly challenge their opponents to strike. They bear the name of one of the most beloved Minotaur, Garrak.
Ability Score: +2 Constitution.
Steelhide: When struck by a physical attack you may use your reaction to shrug off the attacks damage. You may use your reaction to reduce the attacks damage by rolling a d4 and subtracting it from the damage before other modifiers and math is calculated (Resistance etc). This die roll increases to 1d6 at 11th level and 2d4 at 16th.