The young of our clan do not want to learn. And why would they? Why would anyone want to learn a language that some would kill you for?
— A Koushan Mai elder

Mokai Mai, translated as 'the words', is the native language of the Koushan Mai people. It is a purely oral language with no written form. With the colonisation of their homeland and continued persecution, Mokai Mai language is beginning to die out, with only the most isolated clans speaking it day to day. Whilst most Koushan Mai know at least a few words, it is slowly losing out to both Caillan or Seruic, depending on location.   Telling the oral histories are an integral part of Koushan Mai culture, to the point where each clan has a designated master of stories. This person has learnt all of the history and mythology of the Koushan Mai by rote, and will teach this to several apprentices. To the Koushan Mai, there is no need for a written record. 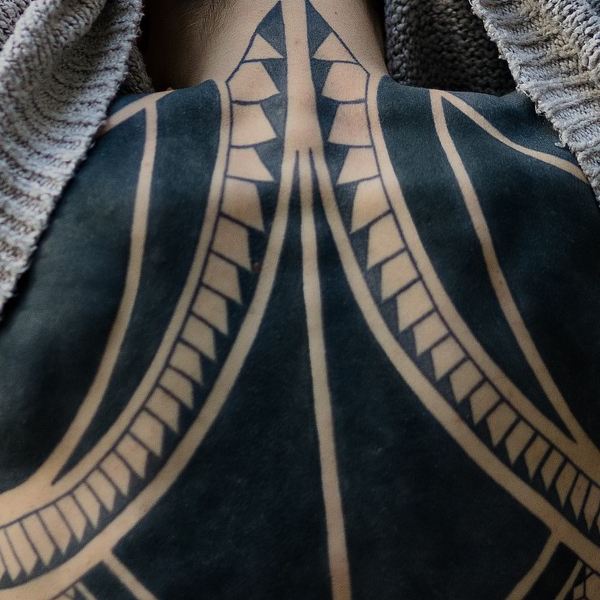 by 13183393
Over the years, there have been attempts to transcribe Mokai Mai into the script most common across Caia. This has been relatively difficult as no one can seem to reach agreements on how certain phonemes should be spelt, or how different quirks of grammar should be notated. Some words, such as the name for the Koushan Mai themselves, have become relatively consistent in recent years, though some older texts have spellings such as 'koshanmai', 'ko shan mi', or 'koshun my'. Other words have no consistency, such as the word for the Koushan Mai tradition of tattooing. Depending on who is writing, this word can be spelt 'lelashan', 'lel'a shan', 'lel ah shan', or 'lela shan'. The apostrophe-a combination has been pushed by some scholars to denote possesion, but it has not yet caught on.   In Kaien, scholars at the University of Linguistics have been trying to preserve the language by standardising a written form. Amongst the scholars working on the endeavour are a few Koushan Mai, refugees from their former homeland. This project is still in its infancy, but the university is confident their work will prevent Mokai Mai from becoming completely extinct.
Languages of Caia

Answering: "a lost or ancient language"
Visit Serukis's Competition Page Check all other answers to this prompt Competition Homepage

How sad it is that languages go extinct! A great article, however. It's very interesting that the language has no written form, either! :)

Thanks! It's really sad, but at least there's some effort to preserve it going on.

I love that you went with a "taboo" language for this prompt. A sad story, not unlike that of many languages in our own world, but you managed to make it interesting in its own right:)

Yeah, I was a little inspired by Welsh and Irish in our world. Thank you!

I hope they can preserve it, and the importance of storytelling to preserve history is a wonderful feature to add to the culture. Great article :)

I think I noticed this as an article you wanted to write and thought it looked interesting. It's sad about how it's dying out. Oral languages are so underappreciated. I hope you'll add a bit more to this article when you have the time, I love learning about languages! (Also I'm low-key working on multiple languages for another world)

Definitely planning on adding a lot more to this after Summer Camp is over! Languages are really interesting to me. Thank you so much. <3

Oh wow, a purely oral language! How sad that it's dying out, too :( I love what you've done here so far, and I'm looking forward to seeing how you expand it more as well :)

I love the idea of a lost language that might soon be truly lost.   Well, I don't love that idea. I just think it's fascinating, and that you've done a great job with it.

I hope they can preserve the language. It would suck to see it die out. I like that the attempts to make an actual script fail just because they cant seem to agree on things. well done as always!

Thanks! I get much joy from imagining scholars arguing over punctuation. :D