In order to solve the painful challenge of navigating the Corralums—a journey which involves as much climbing as it does walking—Yak'koli organeers invented the Iron Spider—a nightmarish amalgam of mechanics and organics fused together into a vehicle so well-suited to travel within corralum that they became the Pact-standard vehicle for travel in the Underside.

To create Iron Spiders, organeers begin tage Spiderpod nymphs, reinforce their limbs with mechanical struts, and build a cockpit into their bodies, often replacing many organs with mechanical alternatives or shoving them aside entirely. Jutting from the cockpit are telescopic arms for mining and manipulation—the kinematics of motion between points is handled by the spiderpod itself, which has been chemically zombified by a Brainjack Mantle. 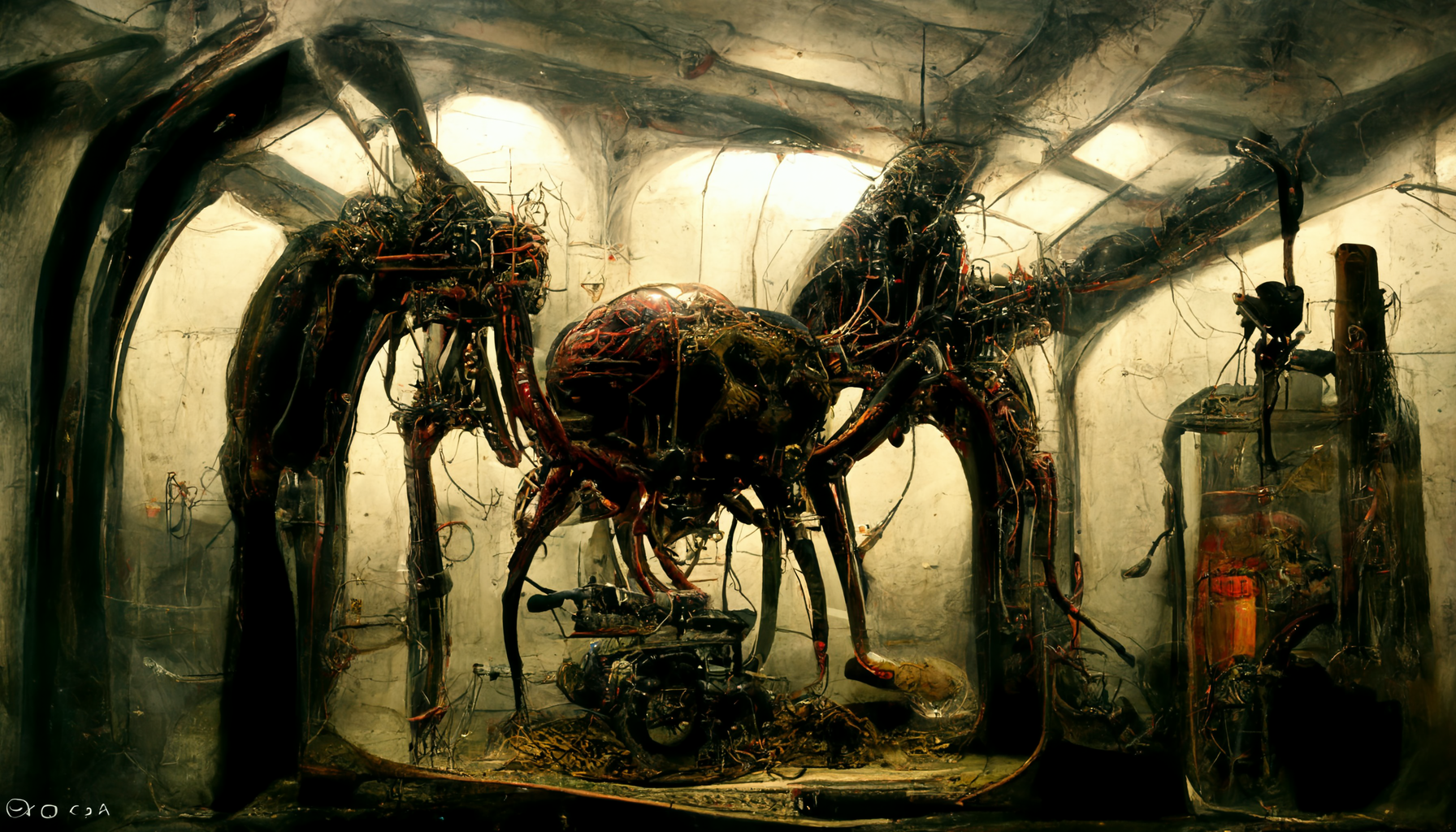 Iron Spider in Garage by Ademal

A Brainjack Mantle grants the pilot control over the spiderpod's nervous system.

To the right is an illustration of a spiderpod's isolated brain casing with attached Brainjack Mantle and spinal hoist. The cranium, which is about 0.5m across, sits above a cartiliginous eye socket. The brainjack connects to the back of the cranium and into the retinal nerves of the spiderpod dulling their senses and giving the controller command over the spiderpod's drives and urges.

Extending rightwards is the Spiderpod's spine—a 4-vertebrae boney structure which allows it to curl and compress its body. In the case of an Iron Spider, an extra hoist is installed between the 2nd and 3rd vertebrae to help it carry the weight of the cockpit while still being able to twist and bend its body. 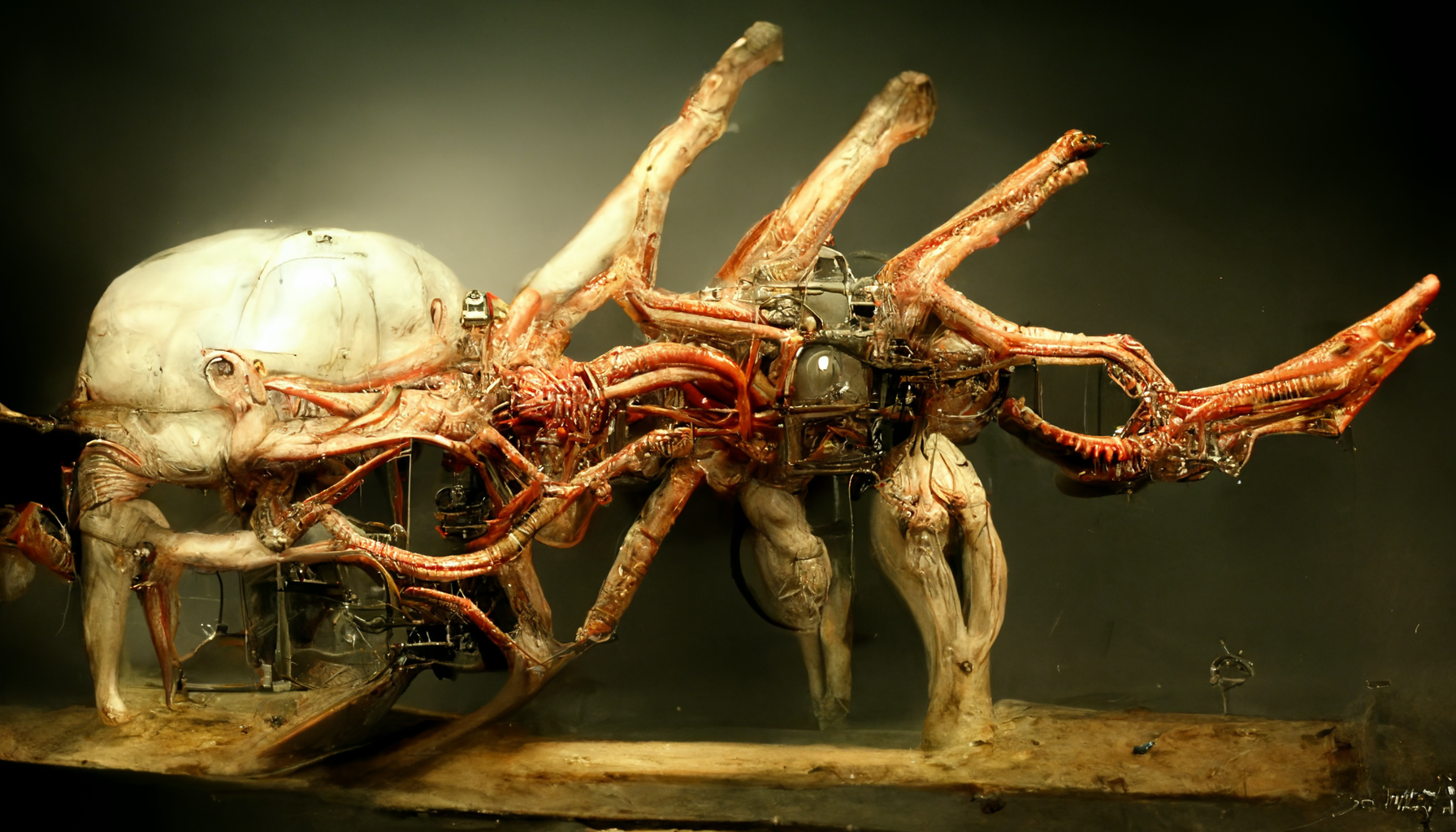 In order to keep pace with the demands placed on the spiderpod's anatomy, their digestive and endocrine systems receive a multitude of upgrades.

The illustration to the right shows a spiderpod's organs isolated from the host and spaced to anatomical accuracy. Starting to the left and working towards the top-right corner is the upgraded digestive system, with a pancreas floating off to the bottom right of the frame. The cradle of machinery in which they rest forms a structural cage to support the weight of a cockpit astride it. 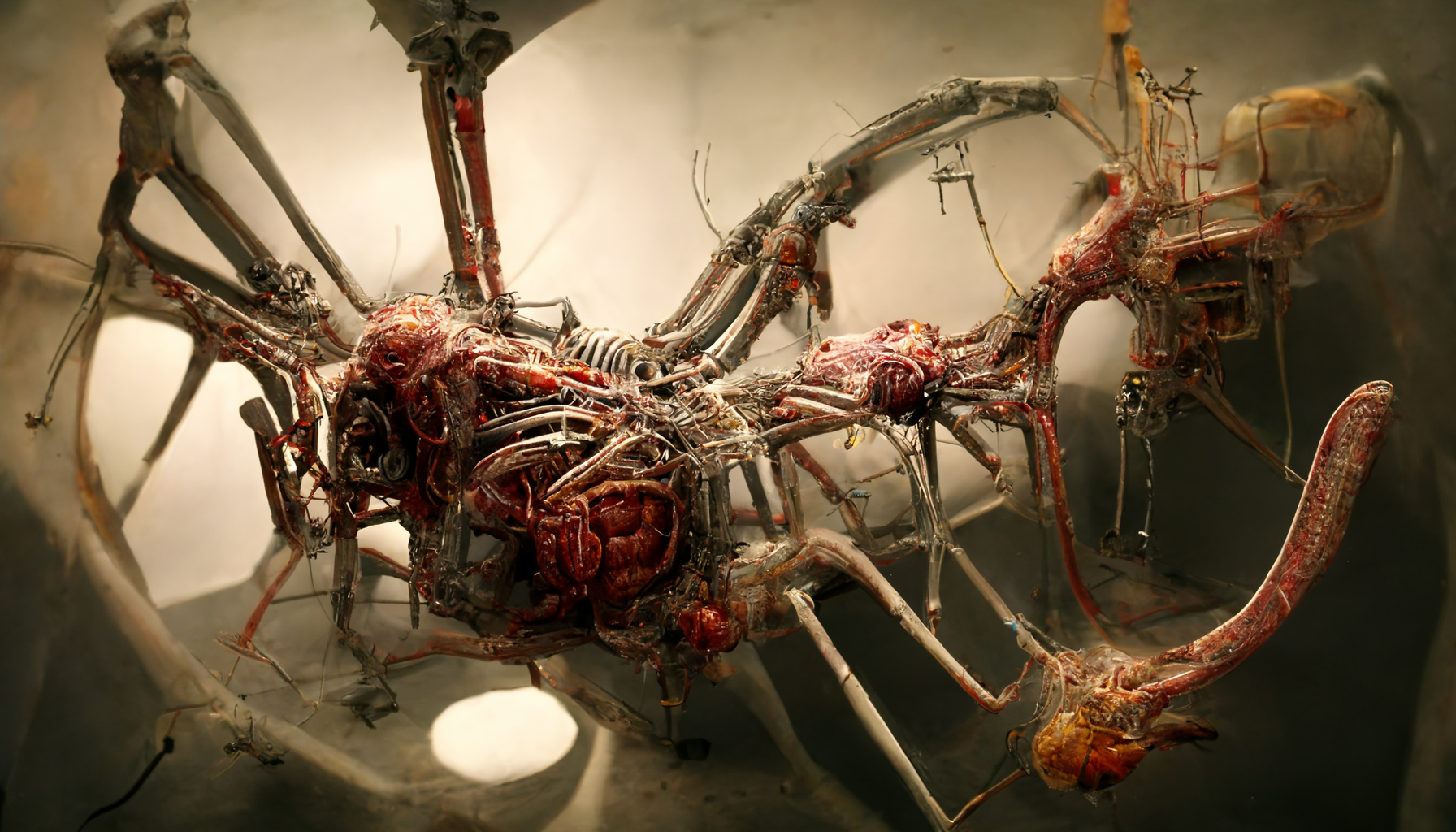 Reinforcing machinery added to the spiderpod's joints help them to support immense force without wear, allowing the pilot to push the spiderpod harder and faster than it ever was in life, reaching speeds up to 50mph and leaping incredible distances. Custom jobs can be even more powerful.

These additions are among the most time-consuming, as a spiderpod's legs can often have up to eight joints, and may bifurcate or trifurcate into additional segments.

On the lefthand side of the following illustration is a Spiderpod's shoulder joint and a segment leading towards a trifurcated joint. 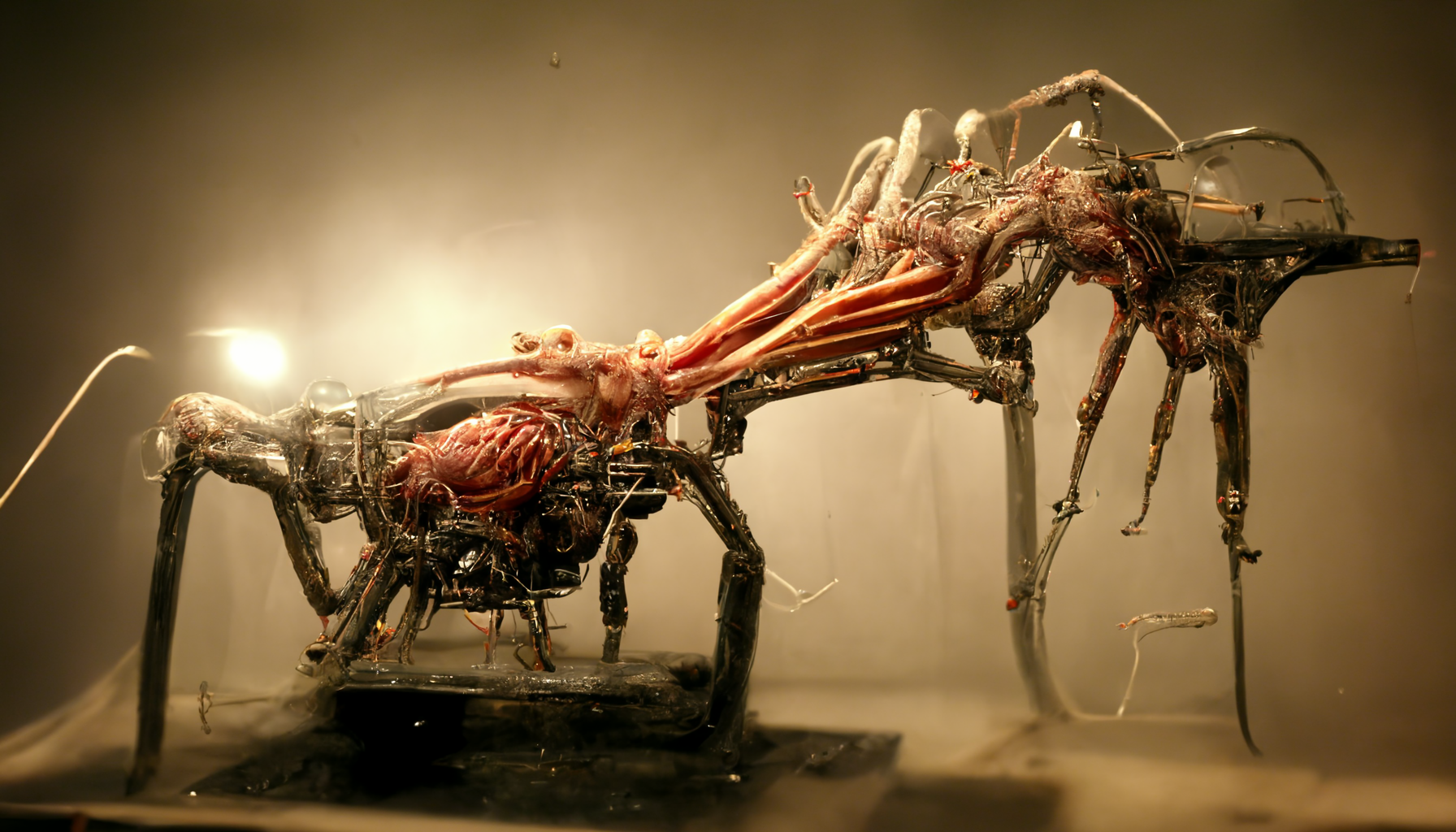 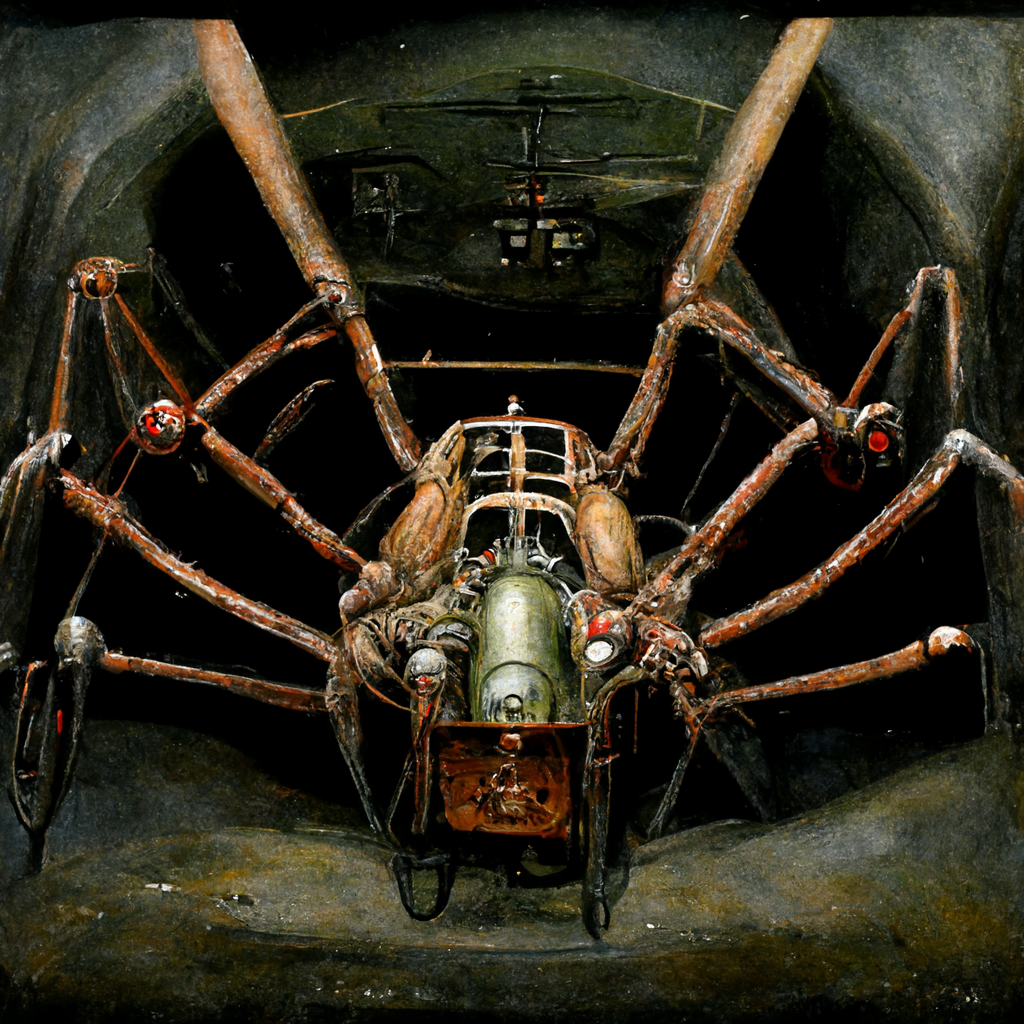 This is... Phew... I nearly had to stop my breakfast while reading this. The entire vehicle is very upsetting, namely the fact that it is somewhat still alive. And the pictures really underline that feeling. So if that was your goal 10/10!   I was going to ask how its with the maitenance of the vehicle. Because it has some living parts and some mechanical parts. But I guess the metal parts can be maintained normally or by replacement, and the living parts simply regenerate, because the spider is still alive? Or it is a once time creation and once it dies... it dies?

What a horrific and trully biopunk creation... I love it! It's such a good article that I've included as part of my Summer Camp '22 Reading Challenge:

Oh these are wonderfully horrible— don't think I've seen a lot of examples of orga tech and am glad to see a delightful one in this!