She stood in shadows, veiled in a darkness that the light of the moon dared not disturb. When at last she turned her face to mine, I met her gaze without flinching. The darkness I found in those eyes rolled out before me, deeper than any cavern and desperate to fill itself with the stars themselves.

I have never seen anything so beautiful.

Eshin Blackwell
“The End is Here”

Hunger in the Flesh

Dark prophecies and unhallowed apocrypha warn of a child both beautiful and kind, but whose very life force is the gate which shall unleash the Great Devourer upon the mortal worlds. A hunger from beyond the walls of reality, this unholy force has no material form and exists only to consume that which does.

The gods themselves tremble at the thought of what dwells in the Beyond, past the most distant stars where aether dares not dwell and even the void of space cannot reach. It is a place that is not a place, a thing that is not a thing - it hungers for the whole of creation itself and the Descending One shall be the vessel by which it slakes its ravening.

Using the Descending One in Your Story

Unlike most titles, a character cannot become the Descending One, she must be born the Descending One - though she need not be aware of the fact. Perhaps the true scope of her powers is only revealed after she begins to tread the course of some ancient prophecy she never even knew existed.

Or, maybe she does know. Maybe she was bred over the course of centuries for this exact purpose and she wants nothing more in all the world than to resist the darkness that threatens to consume her from within.

The exact nature of the Descending One, of how she comes about, how she learns of her nature, and what happens around her because of it is completely left to the GM. As a legendary title, it is very powerful but scales well with most Dungeons and Dragons 5e leveling and shouldn’t throw the balance of your campaign off terribly. Even so, the more frequently the Descending One calls upon the power of the Great Devourer, the stronger its hold on her becomes and she may even find her features have taken to using themselves without her consent or even knowledge.   Rarity: Legendary
Suggested Class: Warlock   Descending One

Great and Terrible The power blossoming in you is a thing of such darkness, such hunger that those around you can only begin to imagine its depths. You have advantage to resist fear, charm, and stunned effects. You can see through any darkness, even magical darkness, up to 150ft. The spell resist DC and spell attack bonuses of all abilities granted by Descending One is determined by using your charisma as your casting stat.

Manifestation Looking into your eyes reveals endless shadows and a haunting hunger. You may spend a bonus action to make a magical attack roll against any target who can see you within 30ft. If you succeed, the target takes 1d6 psychic damage.

Hungering Shadows You imbue the shadows of your enemies with a hunger that can only be slaked in blood. You may spend a full round action to conjure 1d4+1 Hungering Shadows which appear adjacent an enemy or enemies within 150ft of you. These shadows will only attack targets of your choosing but must attack every round or else be destroyed. They exist until destroyed or until this ability is used again to summon more shadows.

Maw of Eternity You clench a fist, ripping a hole in reality to the great Beyond. Tendrils of darkness whip and writhe, whispering dark promises and skull crushing curses to those unfortunate enough to be caught in their embrace. Select a point within 150ft. All creatures within a 20ft radius sphere of that point must pass a dexterity save or take 6d6 Psychic damage. All creatures that begin their turn within the maw must pass a wisdom save or take 1d6 Psychic damage. You may spend your action to move the maw 60ft in any direction. Maintaining the maw requires concentration up to a minute. Using this ability requires an action and, once used, cannot be used again until you’ve finished a long rest.

Invocation You welcome the shadow of The Great Devourer about yourself, veiling yourself in the specter of endless hunger and the uncaring void. When you successfully use Manifestation, the target must pass a wisdom save or become frightened. A character frightened by this ability may attempt another resist at the beginning of its next turn to escape this effect.

Beloved of the Beyond You are the gate of the Endless Hunger into the material world and its power offers you a measure of protection even from death itself. If you would be reduced to 0 HP or less or would otherwise die, you are instead reduced to 1 HP. Once used, this effect cannot be used again for seven days.

Feeding the Void You infuse your spells and your steel, your very self with the frozen darkness of the void Beyond and the chittering whispers of its grim offerings. You may make any damage you deal into Psychic damage. If you do this, add your Charisma modifier to the total damage dealt. You may use this ability up to three times after which you may not use it again until you have completed a long rest.

Army of Shades The darkness itself rises up to answer your call, spewing Hungering Shadows from every crack, crevice and shady space to devour your enemies. You spawn 1d4+1 Hungering Shadows around every enemy creature within 60ft of you. These Hungering Shadows function exactly as the Descending One feature of the same name, save that they only last for concentration up to a minute. Using this ability requires a full round action and, once used, cannot be used again until you have completed a long rest.

Walking in Darkness The shadows welcome you as their chosen, whisking you through the cold and hungry void to cross vast distances in the blink of an eye. You may spend your movement action to step into shadows and reappear from within any shadow within 150ft of your starting position.

Incarnation You invite The Great Devourer to inhabit your body, shrouding the world around you in night and pouring forth your unholy wrath into the world. All your active Descending One features now require only a bonus action to activate, no longer require concentration, and no longer require a rest before they can be used again. The world within 300ft of you is shrouded in Darkness as the spell, which you can see through as though it were daylight. You cannot be incapacitated or stunned. If you would die while Incarnation is active, you are instead reduced to 1 hp and the effect ends. This effect lasts 1 minute and can be activated at any time without consuming an action but, once activated, cannot be used again for seven days. 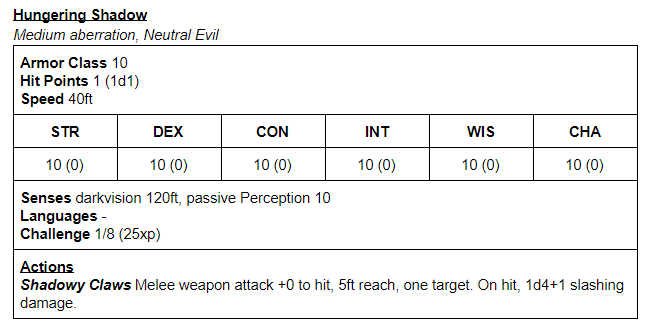