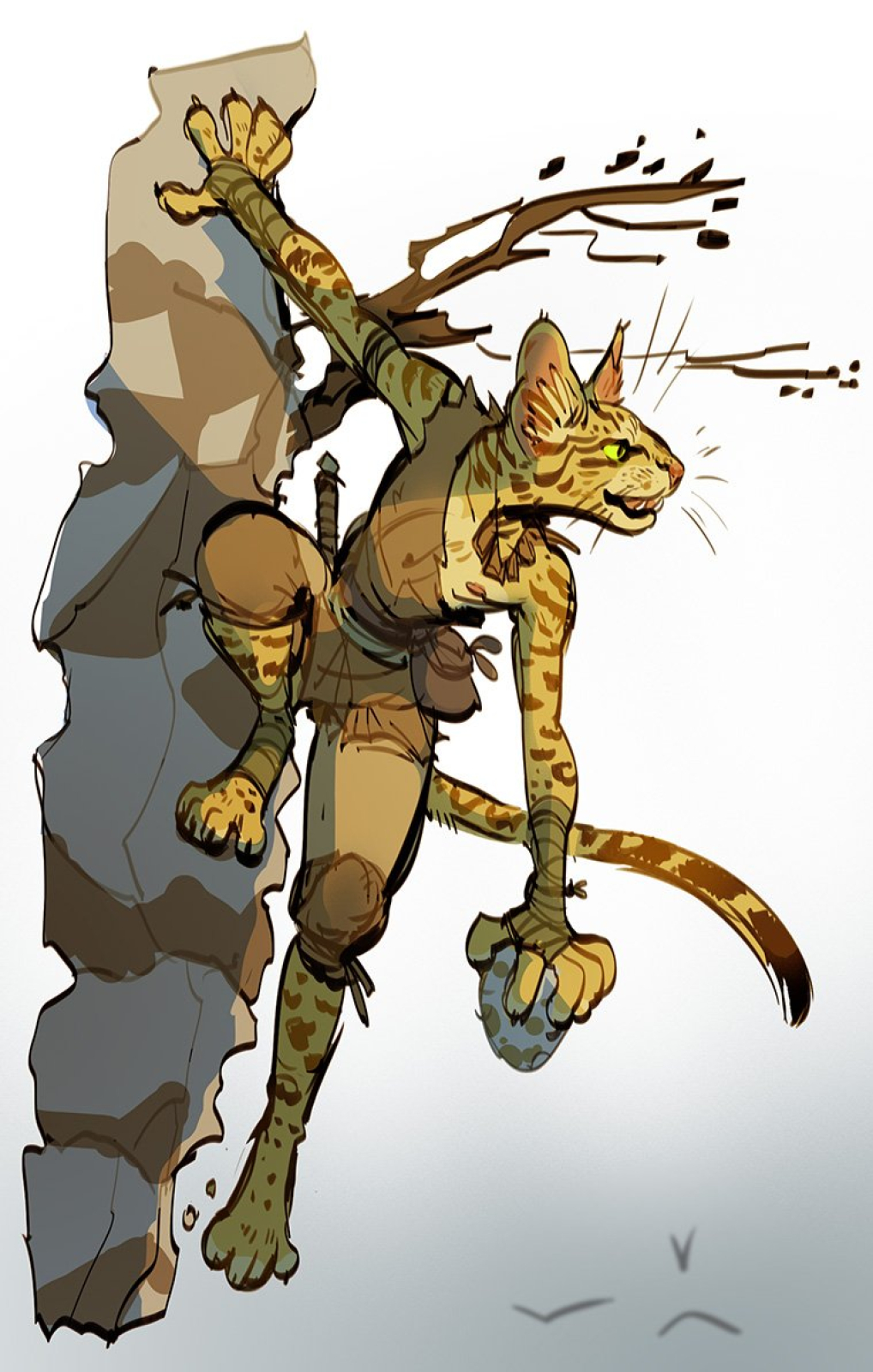 That's Jim, the ships cat. Full of stories that one is.

In the jungles of Manoclyt, where life is tested by the minute by the myriad of beast and monster, a race of extraordinary cats evolved: the Tabaxi. Ranging from the coniferous highland pine forests in the south, to the fetid spire jungles in the north, the Tabaxi are most at home in the fast paced canopy of that dangerous land. Ranging from four to six feet in length, they the only cat capable of extended bipedal movement, although they are capable of quadrupedal movement and prefer it for long periods of movement.

Unique to this species of cat is the presence of prehensile prime and quint digits on their hands, enabling the ability to grasp branches with ease. As with almost all cats, Tabaxi possess retractable claws on their hands, while their foot claws(which are thicker and duller) remain extended, enabling them to be used like climbing spikes.   The arms and legs of the Tabaxi are somewhat longer then the limbs of other cats of comparative size, with the shoulders being somewhat wider then a normal cats, giving them a wider grasp.   Tabaxi possess spotted pelts similar ocelots and jaguars. There are several colour and pattern morphs, with southern Tabaxi boasting more monochromatic pelts of thicker fur, whereas the Northern Tabaxi are all Gold and brown with thin fur coating their body.

While Tabaxi are capable of sexual reproduction at an age similar to humans, females often do not come into estrus until their fortieth year. Estrus in females is tied to a number of factors, with general stress levels being a definite tie-in. In Tabaxi culture, a female who has "seen enough" is one who may be interested in mating.   Male Tabaxi are actually the least interested in the act of reproduction, with the females doing most of the courtship. Males are also rarely involved with the rearing and education of kittens, although there are exceptions, especially in the coastal communities where they have encountered outsiders.

A matron Tabaxi gives birth to a litter of four to six kittens after six months gestation. She is unlikely to have another litter in her life (there are exceptions), but for the first six months of their lives they are blind and helpless, although they can often remember things from their third month with remarkable clarity. It is no accident that Matrons often name their young when they have said their first words, as the event is marked with an almost reverent celebration.   Tabaxi kittens grow fast after their eyes open, loosing all semblance of awkwardness by the end of their second year. By the age of three, they are called kits, and are enjoying the long adolescence that ends at the age of eighteen. The time is spent honing their hunting prowess, and listening to stories from the elder Tabaxi in their communities.   Adulthood is marked by the desire to travel. A young Tabaxi rarely returns to the place of its birth, instead trying to find a new clan to eventually merge with. With the arrival of Bristillian ships to their shores some two hundred years ago, some have ranged as far as the ends of the world assimilating easily into new societies. But it is rare for a Tabaxi to find a mate outside of Manoclyt as it is rare for a clan to leave that shore.

Tabaxi are arboreal cats with a strong social inclination. A Tabaxi does not sleep well on the ground and will often go to great lengths to sleep in a tree. A clan often sleeps in a grand hammock at the center of their settlement. There is something to the this tradition that Tabaxi find deeply satisfying.

All Tabaxi are carnivores, a dietary necessity that cannot be ignored. A Tabaxi can digest proteins more efficiently then a human can. They have been known to enjoy the odd piece of fruit and some have acquired a taste for alcohol.

Matrons raise kits and jointly rule on dilemmas the clan may face, such as territorial disputes. Males tend share information between clans, while Elder males act as advisers to the Matrons.

Bulk of population is in Manoclyt.

Like all cats, Tabaxi are capable of seeing well in dim light. Their eyes are larger then a humans, while their excellent hearing is more suited to hearing things directly in front of them. This sensory system gives an advantage to listening in on conversations, but not to hearing something moving towards you. This weakness is possibly the root cause for Tabaxi society.

Jaer Bird- Known to alert Tabaxi to coming of predators. Jaer Birds tend to roost above Tabaxi for protection.

Cleanliness is paramount. A dirty Tabaxi is a sick and unloved Tabaxi.

All Tabaxi love stories. They will collect an outstanding amount of stories and remember each one with remarkable clarity. The most common and most beloved act in Tabaxi culture is the sharing of stories.   But this behavior isn't entirely selfless. Indeed females will often court the most collected, most experienced male storytellers. A male who recants tales of his journeys and adventures will have an audience and will often draw a listening ear, but if his stories are well told and intriguing, he may draw a mate to him.   The story of courtship is one that plays out with little rivalry and envy: a Matron is not jealous if her mate has others. Indeed, it is taxing enough for a female to coax a male that she is just glad for some of the intimacy. The union usually only lasts a month, and the male may well leave soon after. This is the way they live. For Tabaxi love is a story, with a beginning, middle and end.   There is something to note: while the Matron tends to her litter of kittens, she will quietly recite to them her stories and the stories her mate recited to her when she loved him. A Tabaxi father may never meet his kittens, but every kitten knows its father.

Stone age, with adoption of modern technology with ease.

Eating is a messy ordeal. Clean-up as soon as you are done.

Tabaxi rarely wear clothes, although a harness is often worn to hold tools. Leather armor is often chosen if they are in a dangerous line of work outside of Mano'clat.

Interrupting a story is a good way to get thrown from a community, both figuratively and literally.

Tabaxi get on well with most civilized folk and are known as great listeners. They avoid conflict, but enjoy the hunt of prey. A Tabaxi bounty hunter is to be feared and a Tabaxi thief is often impossible to catch.
Scientific Name
Leopardus Saltator
Origin/Ancestry
Feline
Lifespan
80 Years
Conservation Status
Uncommon throughout the rest of the world.
Average Weight
140-180 lbs.
Average Length
5' 10"
Average Physique
Lanky.
Body Tint, Colouring and Marking
Spots, rings and dorsal stripes in fur.