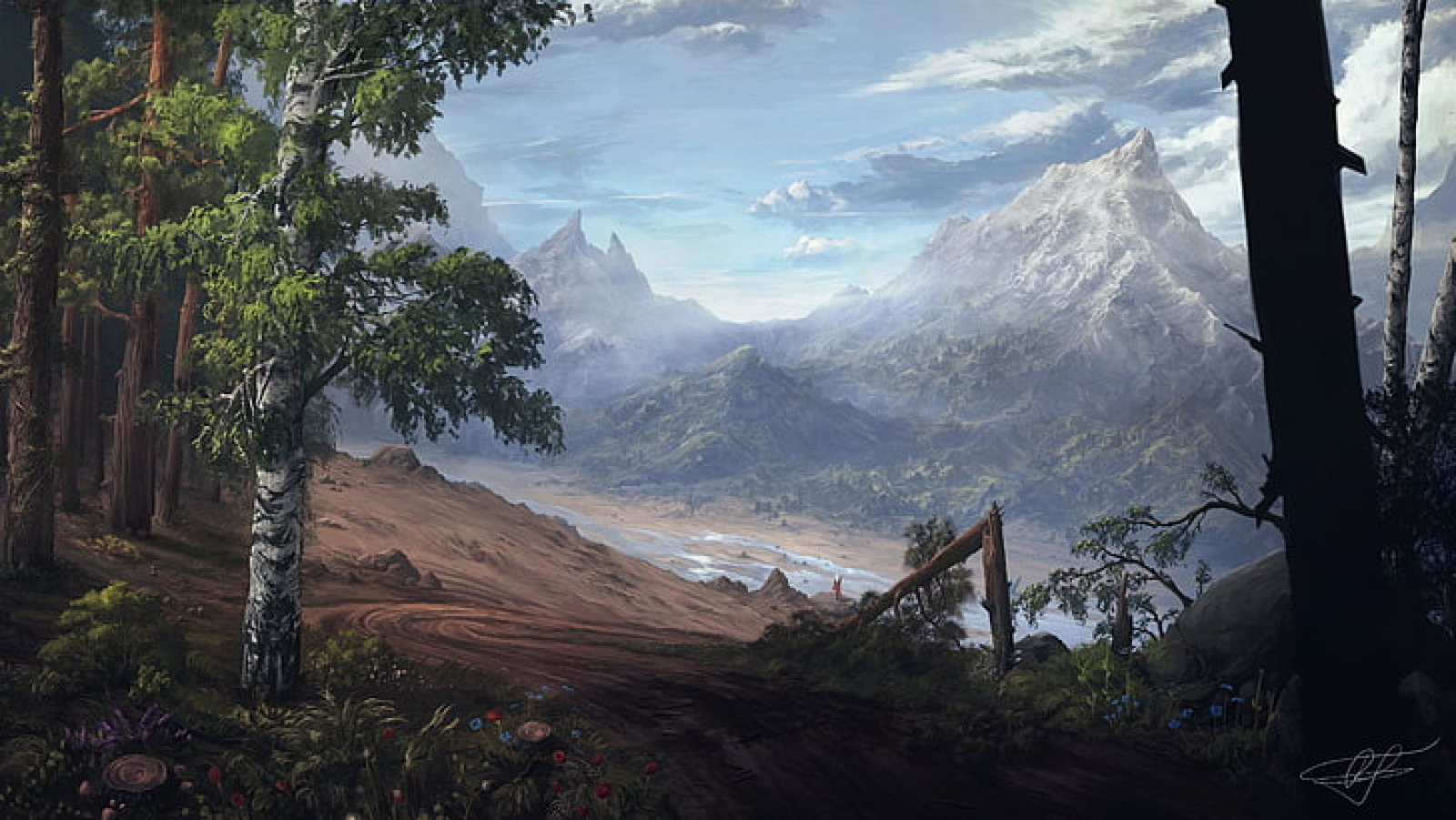 Strong he stands often with axe in hand like his forbearers before him. With calloused palms and a forth right soul, Aldrich Eberheart, half-Elf of two peoples, fights boldly as a paladin of Chauntea.

Aldrich Eberhart lived in a small village, too small to be included on most maps. It was known locally as Felton Field. He lived there with his father, a farmer, like all the residents in the area, and like all children in the farmlands, he was taught to work and contribute from a very young age. He was different in that he was the only child of Elven blood in the village, as Aldrich’s mother was an Elf.   Around his fifteenth year, in midwinter, a rain came. The rain was hard and freezing at times, but the cold of the rain was not the problem, the volume was. It rained nonstop for three weeks. As the rain fell and fell, it eventually soaked all the stores of grain, the barns became saturated and the livestock started to freeze to death. The large majority of the grain stores were so soaked that they became unusable and as they were unable to dry out, they developed a mold rendering them entirely useless. The village, facing the remainder of the winter with little to no food seemed doomed.   Aldrich refused to lose hope and he then prayed to Chauntea for strength, and she gave it to him. Inspired, he would spent days sifting through sacks to find useable grain. He spent days hunting from dawn to dusk and others fishing well before day break. Whilst the food was meager, the village made it through the winter off of his efforts alone. Hailed as a hero, his victory was not without loss. Many villagers became ill and passed, his father was one of those villagers. The loss was devastating but he would carry on.   Aldrich had little knowledge of his mother but in the Spring, after barely surviving the winter, his mother appeared. She told him that word of his deeds had made it all the way back to her and that it was time to come learn the Elven ways. He reluctantly agreed and told the village leaders that he would return one day to till his father’s ground, they assured him that it would be his when he returned. Before he left, he went to retrieve the battle axe that was wielded by Eberhart men generations before him but he was stopped by his mother.   "I’ve used magic to bury it with your father," his mother had told him. "You are a half-Elf not a half-Dwarf, and as such you’ll not be training with an axe. Now, come along."   The next few years were hard. His Wood Elf family were an intense people and their harsh ways were difficult compared to the simple calm of farming. The only boy, and the only half-Elf of ten children; Aldrich was perpetually the outcast. His family never backed away from teaching him and made molding him into a better Elf their duty and love. His faith, however, did not fall to join theirs, his faith in Chauntea remained and made him strong. His father had given him love, and his mother had given him strength, and he found realization.   He realized that through it all it was his devotion to Chauntea that carried him through life’s troubles and he knew then that he would devote himself to his goddess. On his twentieth year he was allowed to leave his mother’s custody and become a free man. He returned to Felton Field, but only for a visit and then, after shaking hands and collecting a few keepsakes from his home, he struck out for the closest temple of Chauntea.   Aldrich’s physical strength as a farm boy combined with the martial training he received from his mother’s tribe had made him the perfect candidate for knighthood and in Chauntea’s temple, they branded him a Paladin of her order. He studied and trained, he trained and studied, and then waited for his first chance to go out and use his strength to help the peoples of the world. Finally, Aldrich was given his opportunity and was sent to guard relics bound for Daggerford with the Moonsea Trading Company; there, he found adventure.

Aldrich became a Champions of Destiny in Olostin's Hold amid adventure . 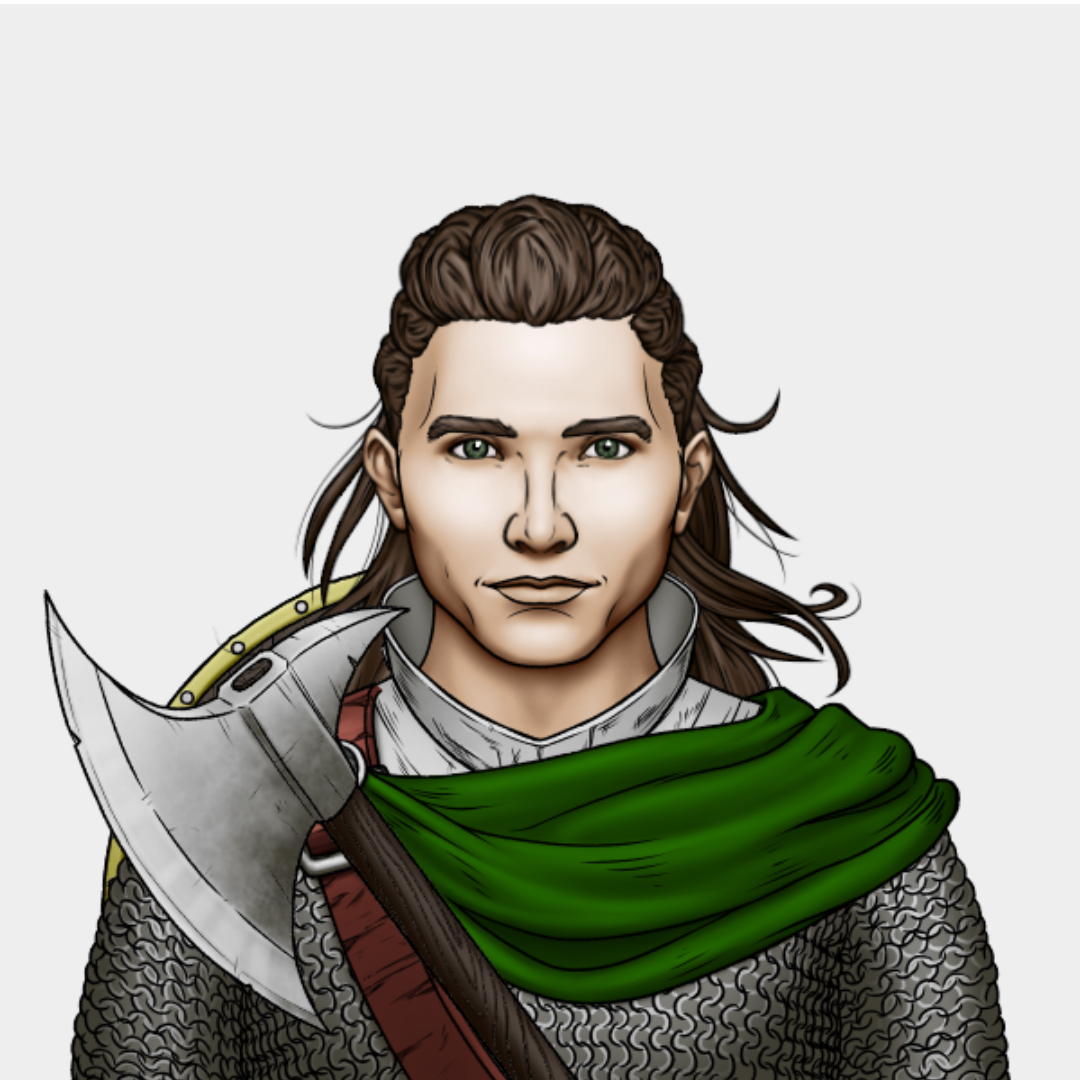