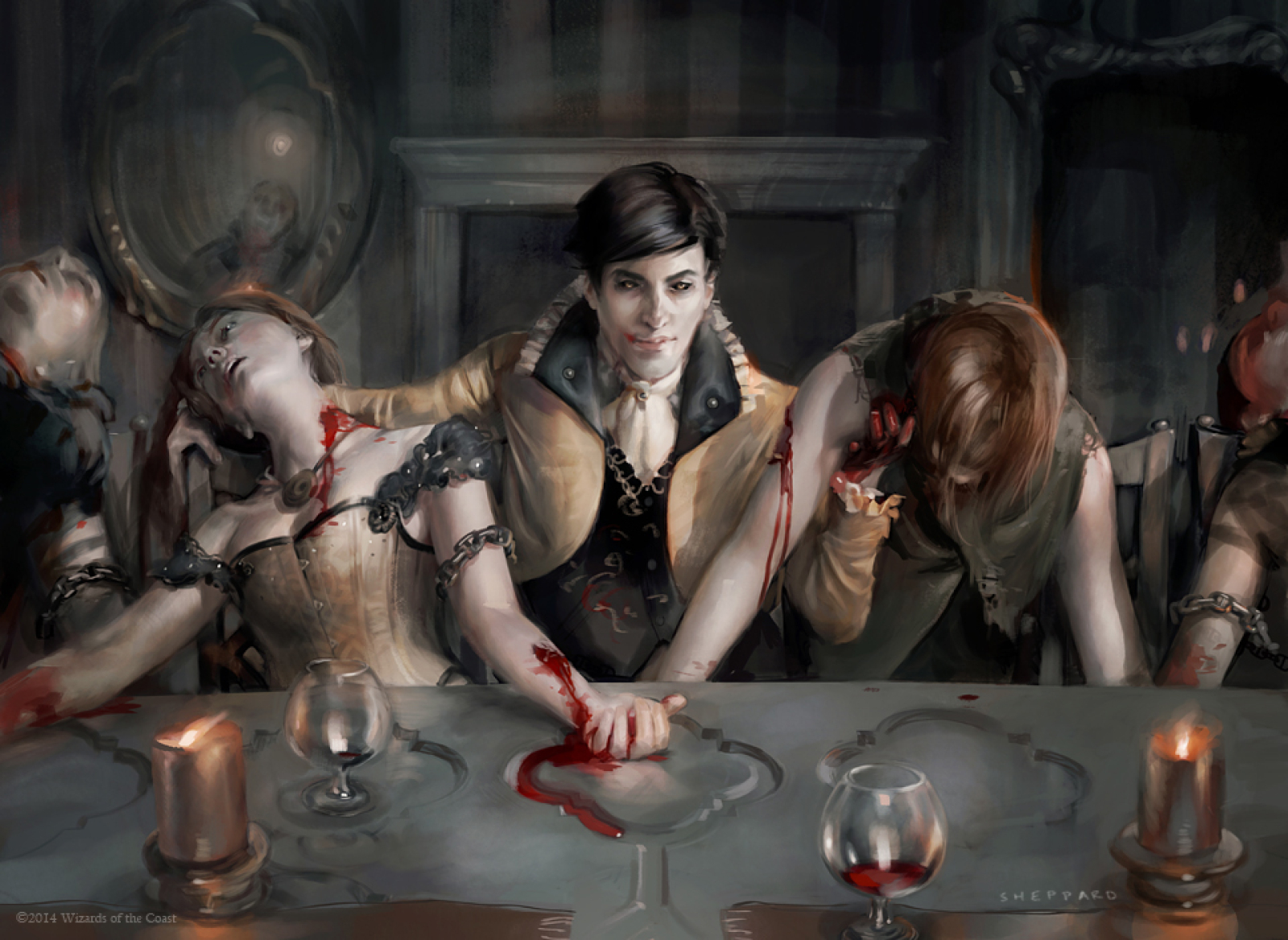 What do you mean I can't drink the guests, worst party ever.
— Gangrel to a Daeva

Blood of Vecna, Crimson Life, Vitae is something beyond blood, something greater than blood. The Vitae is sacred. Most believe that Vitae is just another word for blood, an easy misunderstanding, but far from the truth. Vampires require blood to "live", but do not produce it, so they must take it. Upon ingesting mortal blood, they convert it into Vitae. So simple, yet so complex. New vampires are blessed with not only the Vitae from their sire linking them to the clan, but this Vitae is laced with a spark of essense from the Dark God Vecna. He has touched each and everyone of his Kindred children with his own blood imbuing them with nothing short of the dark and the divine. 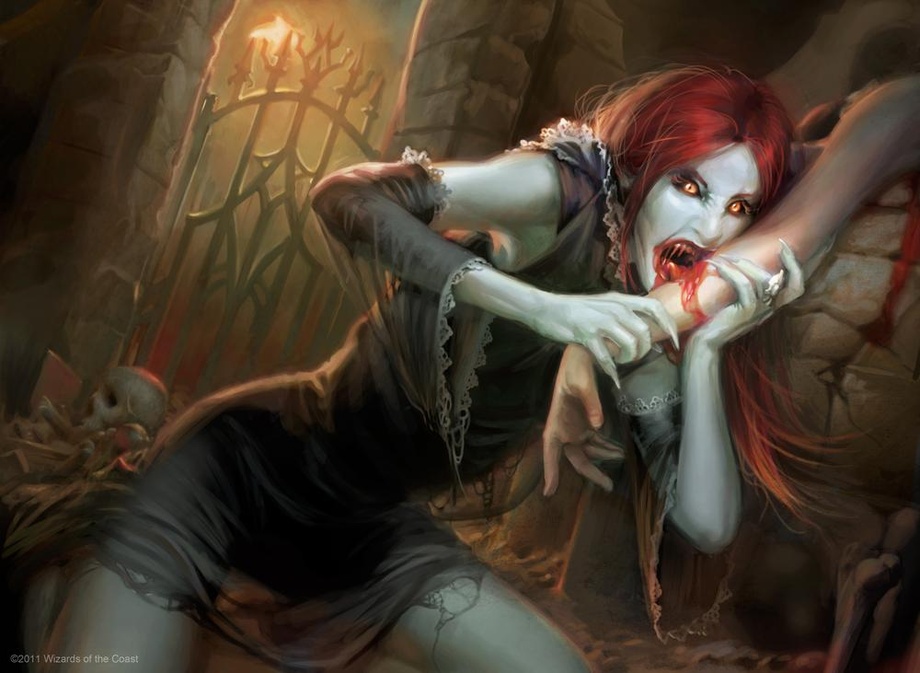 When a new vampire open its eyes, it is assaulted by a another world. The world screaming out to enhanced senses, the throb of blood being pumped through the veins of mortals, and the hunger like nothing they ever experienced in life.

Easy, easy, hold on you snarling beast of a new vamp. I know you’re hungry, I would be a terrible parent if I did not feed you. Your first sip comes from my wrist, your first sip binds you even deeper. Yes, drink deep! No need to be greedy, you will need to learn control. The hunger will be your enemy, every moment of your very long existence, the urge growling deep within you, gnawing at you.
— Ventrue Sire to Progeny

While in day-sleep a Vampires body appears much like a corpse would. Every time they wake from day-sleep they expend a small portion of Vitae, in a sense "restarting" their bodies. This single fact weighs heavy on many Kindred, acting like a count down until their next feeding.

Waking is like a fatal heart attack in reverse; the body hurts and does not work. The heart slowly begins pulsing, and the body slowly fights back to life. The limbs begin paralyzed, but then tingle and grow flush.
— Vampire the Requiem

A vampire gives full meaning to the words, "Dead Man Walking". Their body has no pulse, their skin is room temperature and with close inspection, nothing appears right with them. A Kindred may expend Vitae to feign Humanity for a time. This allows them to flush and warm their skin, appear to draw breath, force their heart to beat, smoke a pipe, or simulate arousal. But alas it's a thin veil of deception that will never provide the same feeling, high or pleasure that was lost. Most vampires consider this a waste of their most precious resource.

Only A Flesh Wound

Kindred may heal some of the most severe wounds caused by mundane weapons, giving the appearance of powerful regeneration or immunity to harm. A concentrated assault by a large number of attackers is still a concern for most Vampires. The Vitae holds itself within their masters body, contrary to impact or wounds, none being lost from injuries. Vitae is so strongly tied to the Vampire that it flows and moves only at their command.

The damn creature would not drop! Already a half dozen crossbow bolts protruded from it, yet he had slaughtered three more guards in a heartbeat. Blood, gore, sheared chain links, broken weapons and limbs lay scattered around the scene.   I could hear my own heart hammering in terror as he ignored the rest and locked eyes with me. I think he could hear it also as he smiled, showing gleaming white fangs, contrasted by hands covered in crimson blood. Bolts were being expelled from his unholy body as the wounds began to seal. That is when the Sun Priest showed up ...
— Recently Retired Guard Captain

Gifts of the Dark Father

All Kindred can flood their muscles with Vitae to enhance their Physical Prowess, becoming stronger, faster and more resilient. Vampires may manifest Physical Disciplines taking their Physical Prowess to another level. They can perform the kind of supernatural feats that are usually reserved for transformation or alteration magic, allowing them to cross great distance faster than the eye can follow, shatter walls, and withstand the impact of a catapult.   Other Disciplines grant vampires gifts not unlike magic or sorcery, allowing them to bend wills with a word, induce awe awe or nightmares, or vanish against the shadows of the night. Most Disciplines cost little or no Vitae, while mastery of the more powerful ones usually require the expenditure of Vitae to stir the power. Even Cruac Blood Sorcery may be summoned through the lens of the beast and paid in Vitae.

Unto his Kindred progeny Vecna gave many gifts. To the masters of each Clan he granted a single gift unique to them and theirs. To the Rose he granted the ability of enthralling with a glance. To the those most Feral he granted that their bodies may adapt as needed. To the Shadows he granted the sense to see the depth of dangers and secrets. To the Haunts he gave them control of the waking nightmares that mortals fear. To the Kings he gave their commands and voice the weight to be obeyed. 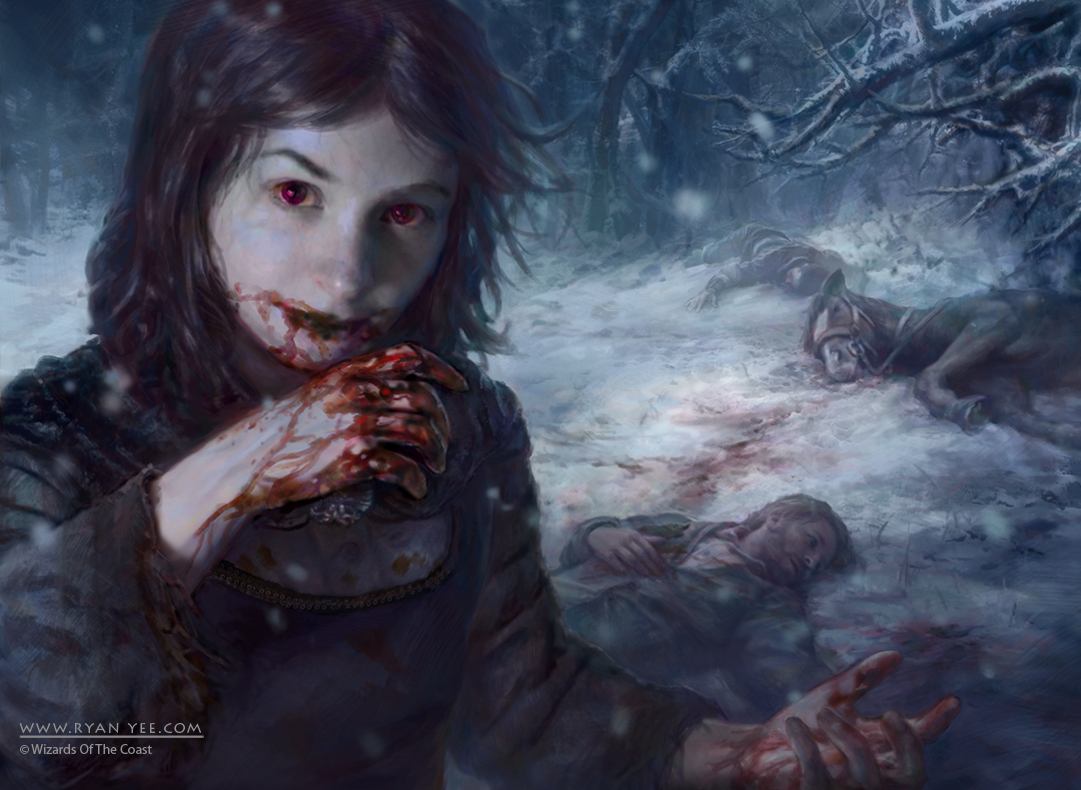 Of course, we must feed, it is our nature. However, if you are doing it correctly, there is no need to leave a trail of bodies in you wake like an avatar of death. it also cuts down on gathering Hunters and vengeful husbands turned Hunter seeking your destruction.
— Daeva Sire to her Progeny

The Hunt for blood is central to a vampire's existence, and helps define the vampires requiem and who they are within it. Mortal food and drink is useless to vampires, providing no sustenance. Most vampires feed under the subtle guise of "the Kiss". Upon gaining their new unlife, they gain retractable fangs that allow them to feed from mortals. The Kindred wear the Masquerade like a second skin, and can lick the wound hiding all traces of their feeding.

Be careful what you sink your fangs into. There are still things left in the world meaner than we are and so strange their essense may destroy us.
— Mekhet Sire to her Progeny

Kindred vampires may "Grant Life" using one of two approaches. The first example a vampire may Embrace a mortal granting them Vecna's Gift, killing the mortal and transforming them into a new vampire. The new vampire is now bound to the sire and his clan through his Vitae. More importantly the new vampire is now invested with the spark of Vecnas essense. Vecna's essense is the spark that ignites significant changes within the vampire shaping his unlife and potential enhancements and powers.   The second method may appear less impressive but it is just as important to the vampires unlife. This allows a vampires to invest a mortal with his Vitae making him more than a mortal and less than a vampire. Vampires may ghoul a mortal for reason or whim, of times making them body guards, assistants and maybe confidants. This gift of "Enhanced Life" grants increased endurance, healing and limited access to vampire Disciplines. In addition it staves off the pull of age as long as the ghoul sustains a trace of Vitae in their system. Most important, through a ghoul the vampire can achieve goals while the sun shines its dangerous face.

Call of the Blood

Blood Sympathy is a supernatural or mystical link created between "related" vampires. This may allow them to feel one another at critical moments. This could include a moment of frenzy or the pain of violent torpor. The feeling or information is vague and rarely clear, coming in the form of visions, symbols and indecipherable messages. One the the closest ties, like those between sire and progeny will result in clear messages.

He staggered, snapping his wine glass in two, while steadied himself against the wall. He felt the agony of pain, the sharp stroke of fire sizzling undead flesh. His progeny! He spun feeling the direction and tug, calling on the Blood of Vecna. He was a blur leaving the manor as the pieces of the wine glass shattered to the marble floor.   Someone would pay for this...   He would teach them of pain...

The Blood Bond creates fierce one-sided allegiance between the Kindred (Regnant) and whoever drinks their Vitae (Thrall). The Thrall experiences infatuation, devotion, wanted or need for the Regnant. Although a Blood Bond may mimic love it is a cross between addiction and obsession. The Vitae must come directly from the donor and be consumed almost immediately or it loses its power.   Blood bonds have three stages or steps before final bonding, which may only be performed across a minimum of three 24 hour periods. The first drink brings strong intermittent feelings similar to the fresh blush of first love. The second drink brings the Regnant into focus as a priority and no longer just a distraction. While not a slave to the whims of the Regnants his requests are difficult to resist. With the third drink the Regnant becomes the single most important thing in the Thralls life, being driven by passion and obsession. This third drink severs any other partial blood bonds and prevent new one's from forming.

Vitae is highly addictive to mortals and Kindred. The Blood of Vecna is to be considered Sacred and used very carefully in such manner. Any opportunity to gain an advantage is encourage, while keeping in mind never to reveal Vitae or the secrets of the Dark Father, as this breaches the Masquerade. It is rumored that has vampires age an increase in power the effects of Vitae Addiction fall away.

To give players of Kindred Vampires an easy to review resource of their Vampire condition with a focus on the Narrative questions and understanding. Vitae is a great focus because it touches on most aspects of the Vampire condition.   It was exceedingly difficult to write an article about an already well-trod subject covered by the mass of vampire media including Anne Rice, True Blood, Vampire the Masquerade, Vampire the Requiem, and the Originals just to name a few.
Contents

Wet Party
An event where the Masquerade is being upheld, and unless especially designated the mortals are open season for feeding. It is not uncommon to have one or more mortal "tagged" as "Dry" or "Off the Menu" for the event.   Dry Party
An event held by Kindred with specific designs on one or more mortals. This could be to influence nobles or city officials, gather useful or damning information, or analyze the gathering. Feeding at a Dry Party is considered risky and bad form towards the host. Commonly held by Daeva and Ventrue, with Mekhet being a close third.   Blood Feast
A Blood Feast would only be held in the private haven of an Elder or gathering place of Clan or Covenant. So there is no concern of breaching the Masquerade. It is not healthy to be a mortal hanging around as the main course of a Blood Feast. 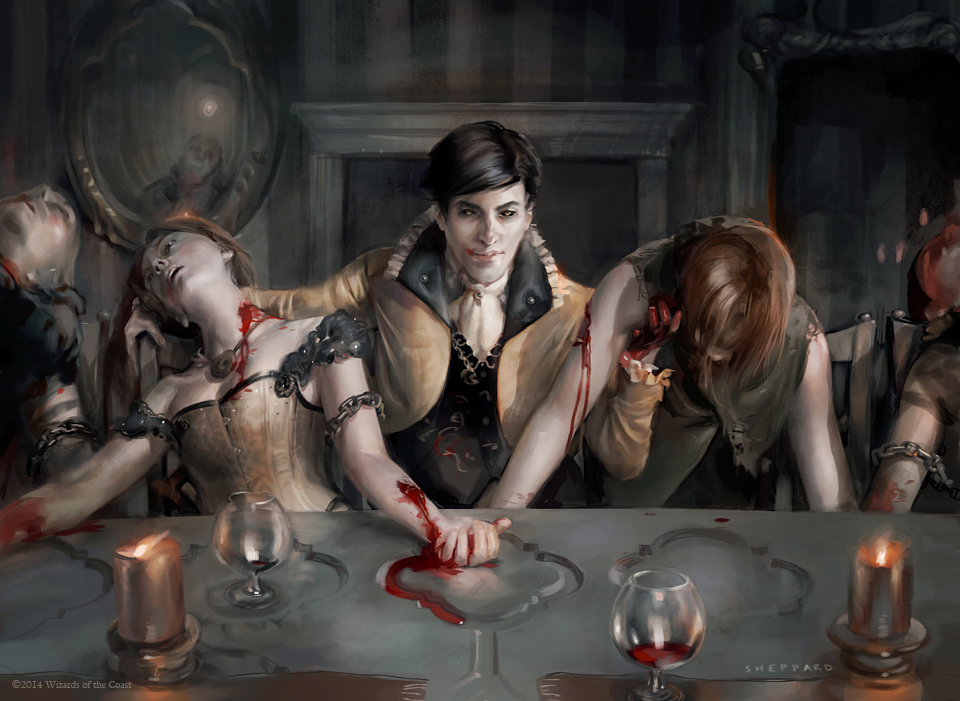 “Portions of the materials are the copyrights and trademarks of Paradox Interactive AB, and are used with permission. All rights reserved. For more information please visit white-wolf.com.” This fan material is not official World of Darkness material from White Wolf.