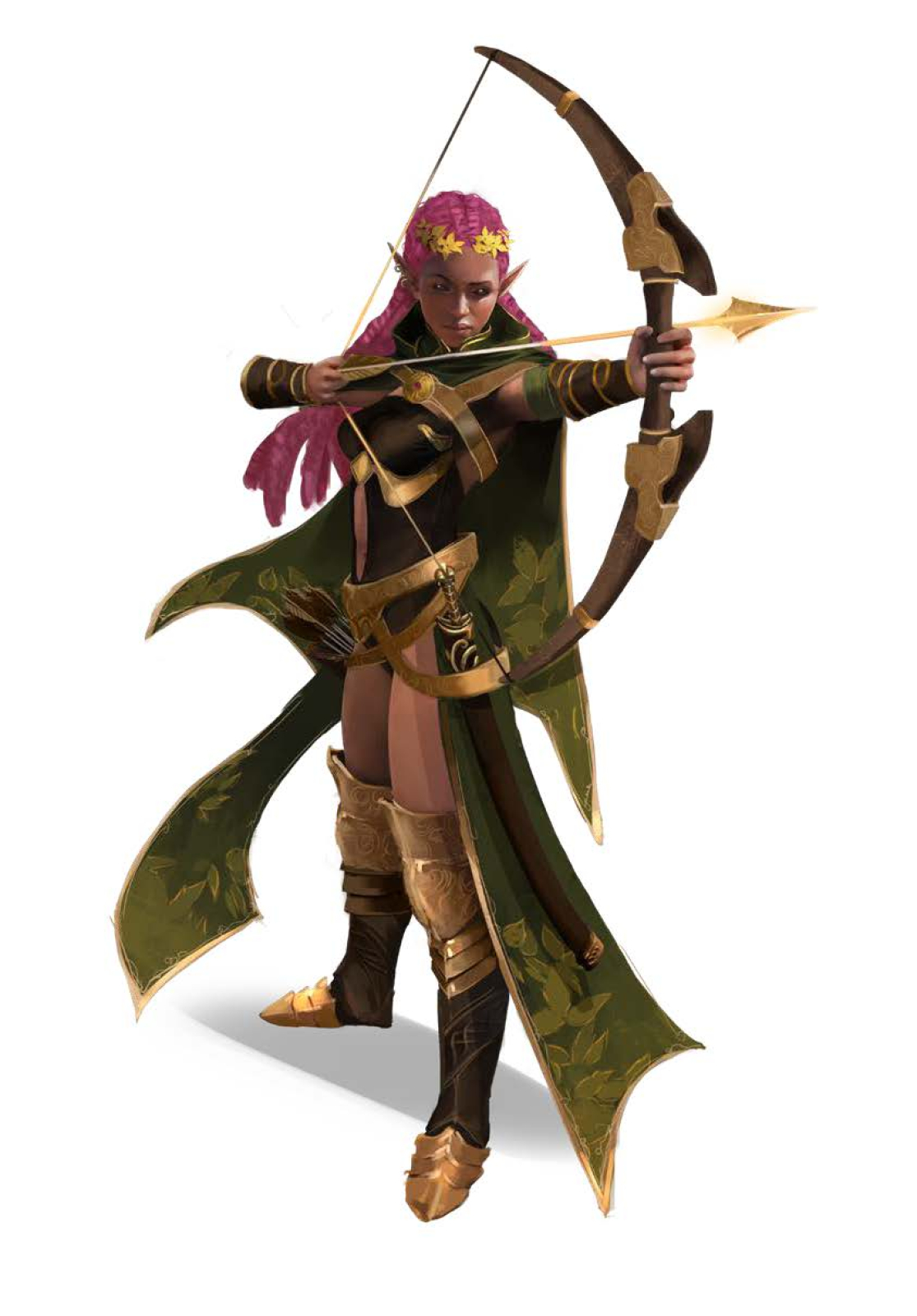 The jungle-dwelling elves known as Ekujae are enigmas to most outsiders and bear many different reputations among the cultures that have come into contact with them. To the masters of the Magaambya in the academic city of Nantambu, Ekujae are an ancient and respected civilization of scholars who sometimes venture from their homes to teach students or to bring rare seeds to the university’s libraries. To the scattered tribes of the Mwangi Jungle, Ekujae are mysterious and implacable guardians of the jungles and are viewed with awe and superstition in equal measure. To capitalistic organizations such as the Aspis Consortium, Ekujae are a fearsome foe well known for their furious attacks on Aspis slavers, such as the infamous massacre at Whitebridge Station. Yet to all who know of them, Ekujae are warriors first and foremost, standing ready to fight against an unknown darkness from an ancient time.   Ekujae themselves tend to hold a skeptical view of most foreigners, especially humans. Ekujae lands are rich with gold and other precious treasures, a fact that has inspired generations of fortune seekers to plunder the jungle and give nothing in return. Ekujae’s relationship with non-Mwangi peoples is especially sour, due largely to conflicts with colonialist slavers, including a recent violent conflict with the Aspis Consortium that has in turn motivated Ekujae warriors to destroy any slaver outposts they come upon. Ekujae also guard many places of great power or dormant evil—places they have little desire for reckless adventurers or sinister forces to uncover. While Ekujae firmly believe that individuals cannot be judged by the actions of others, they nonetheless view outsiders with caution and are reluctant to form alliances or share their secrets; mortals, in Ekujae’s experience, tend to repeat the same mistakes over and over, and while specific groups or rulers might be trustworthy, they die quickly by elven standards and are all too often replaced by individuals eager to exploit Ekujae for their own ambition.   For this reason, Ekujae are quick to confront any trespassers who venture into their lands, though it would be an oversimplification to call them xenophobic or isolationists. They are not authoritarian by nature and leave travelers be so long as they do not appear to be a threat. A simple fruit merchant or virtuous explorer has very little to fear from Ekujae; their scouts will likely follow and watch any such visitors, but this is done as much out of compassion as suspicion, as Ekujae make it a habit to ensure their guests are not attacked by animals or harmed by ancient evils. Even those strangers whom Ekujae deem less than welcome are usually offered a chance to peacefully leave the forest, though refusal can quickly provoke the militant elves’ wrath.

Ekujae share a similar appearance to the humans who live in the Mwangi Expanse. They typically have dark brown skin and black hair, as well as the jet-black eyes typical of elves, though individual Ekujae are prone to variation, from dusky skin to densely coiled rose-blond hair. They tend to be more muscular than other elves thanks to their warrior training, though they are still lanky and wiry compared to many humans of a similar profession.   Ekujae traditionally adorn their bodies with patterns of white paint, the meanings of which are complex enough to elude almost all outsiders. Though they are usually simply representations of a specific elf’s family and clan, an Ekujae’s markings might also indicate information about their profession, accomplishments, personal history, or even simply what mood they are in today. Despite this, most Ekujae usually stick to a specific pattern of symbols on their skin, as the paint is meant to represent the most essential aspects of the individual; thus, an Ekujae who frequently changes their symbols is considered by their peers to be flighty.   Ekujae almost always dress in green and brown, both because these tones make for practical jungle camouflage and because they consider these to be the ancestral colors of their people. They frequently use wood, leaves, leather, fur, and bone in their clothing, and are well known for favoring bark cloth made by pressing the inner bark of trees into sheets. The elves’ wood warping magic enhances the quality of these textiles, and the fine bark cloth and intricate wooden jewelry produced by Ekujae can be extremely valuable in the right markets.

Ekujae are generally suspicious of outsiders, preferring to keep to their own lands and to deal with others only on their own terms. They have strong ties to the Magaambya academy in Nantambu, but their association is too sporadic to be called an alliance, and they deal with most other people on a case-by-case basis. They often send out linguists or other emissaries to local tribes or cities for trade and news, but usually keep them at arms’ length when it comes to the details of Ekujae affairs. The notable exception to this rule is that half-elves from other lands are warmly welcomed by Ekujae clans; Ekujae half-elves strive to provide a sense of belonging that they know can often elude their half-elven kin. Ekujae are also unusual among elves in that they bear little to no enmity toward orcs and half-orcs, with whom they often fight alongside against demonic forces in the Mwangi Jungle. Though Ekujae elves do their best to judge individuals by their actions rather than by cultural assumptions, they are likely to approach any half-orcs they meet from a position of respect.

The Fight Against the Great Darkness

For all of their love of scholarship and artistry, Ekujae are a people at war, and much of their society functions around this cold fact. Even should the Great Darkness never arise again, the Mwangi Jungle is still plagued by unnatural menaces, and Ekujae lands host shrines to ancient demons and worse. Though these elves take what precautions they can, they know that isolation will not save them from the dangers of their past or their homeland, and so they prepare for inevitable battles. Demons and dragons are the favored prey of Ekujae warrior-hunters, but countless other dangers lurk in the Mwangi Jungle, from ancient undead to forgotten arcana to primordial evils from an unknown time. Each adult Ekujae always carries a silver knife and a cold iron knife on their person in anticipation of battle against demons or devils. Ekujae warriors also often wear a cold iron “soulguard”—a circular armored disk worn around the abdomen—that provides protection from demonic magic.   Ekujae must remain ever vigilant for any sign of dark influences or corruption, as these elves are curiously susceptible to demonic poisons and corruptions, as well as lycanthropy. It is unknown whether this is simply due to an unusual vulnerability in their constitutions or a more mysterious reason, but it remains a constant worry among Ekujae exposed to such dangers. Centuries of dealing with this particular vulnerability have made Ekujae among the foremost scholars of methods to reverse such magical poisons and transformations, and many seek out Ekujae help to save loved ones who have no other recourse. However, few Ekujae cures are pleasant or simple.
Mwangi Expanse