Silverthorn is a type of plant that grows in almost every country of the world, as it is extremely resistant to heat and cold and can also do with little water. While silverthorn can be found almost anywhere, it usually grows in very small patches, so it is still considered rare. Silverthorn has many uses.

Silverthorn is a plant with a silver luster and color. It's petals and stamens greatly resemble those of lilies. It has small, round berries that grow in bunches along the plant's stem. It's leaves are slightly spiky and wide. A single silverthorn flower can grow to be about half a foot high. Silverthorn is a very unique plant in the fact that it is actually made of metal. The berries and pollen are the only parts of it that are not actually made out of metal. Silverthorn can thus be melted and forged. Silverthorn is also unique in the fact that it is the only substance known to human kind that can stifle magic. If consumed or touched by a Magie, their magic will become null temporarily. This, along with silverthorn's rarity, make it a very valuable substance.

Since Silverthorn can be used to stifle magic, Magies generally avoid consumption of the berries. While the berries are in the body of the consumer, they will not be able to use MagicMagicMagicMagicMagic without feeling queasy (if they are a Magie). Merely touching the metal can stifle magic. Prolonged exposure to it will start to make a Magie feel sick. However, if a Magie touches silverthorn for a few seconds, they will feel no effects.

Because of it's ability to stifle Magic, many non-magies will craft it into weapons to properly defend themselves against Magies. Silverthorn metal is melted at extremely high temperatures and mixed with other metals before it is forged. The most common weaponry made with silverthorn are swords, daggers, arrows, and bullets. It is less effective in swords than it is in arrows and guns, since swords are not meant to stay in the body of the target; however, it will still work to stifle the target's magic.

Silverthorn berries are not poisonous to humans. The only exception to this would be if a Magie consumed too much silverthorn, in which case they would become ill until their body fully processes it. Despite this, many people -- including Magies from time to time -- consume silverthorn berries as a delicacy. Since the berries are so rare, it is a very expensive dish. In fact, a single berry can be sold for prices as high as 20 francs! The berries are often served in pastries, as a dessert, or as an ingredient in other various kinds of dishes. In some very prestigious cafes in France, silverthorn tarts are sold. The berry's silver skin has a slightly tart taste to it, and the flesh of the berry is a deep purple.

Use in Jewelry and Clothing

Because silverthorn is immensely beautiful and has a luster which does not seem to fade, many people of high society wear silverthorn as jewelry. This can of course include earrings, necklaces, brooches, hairclips, rings, etc. A fashionable thing to do in high society France is to have an actual silverthorn petal on your silverthorn jewelry. Because of the purple flesh of the berry, silverthorn berries are sometimes used as dyes for cloth. However, with silverthorn's high price, this quickly became a practice that went out of fashion.

Silverthorn metal has an extremely high melting temperature. The berries, however, must only be picked if they are to be used, and are soft enough to break through with teeth, much like any other berry.
Item type
Jewelry / Valuable
Rarity
Controlled substance 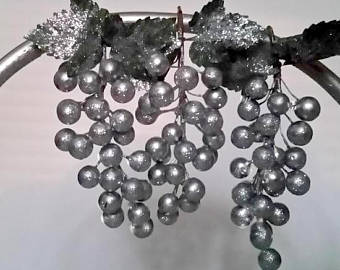 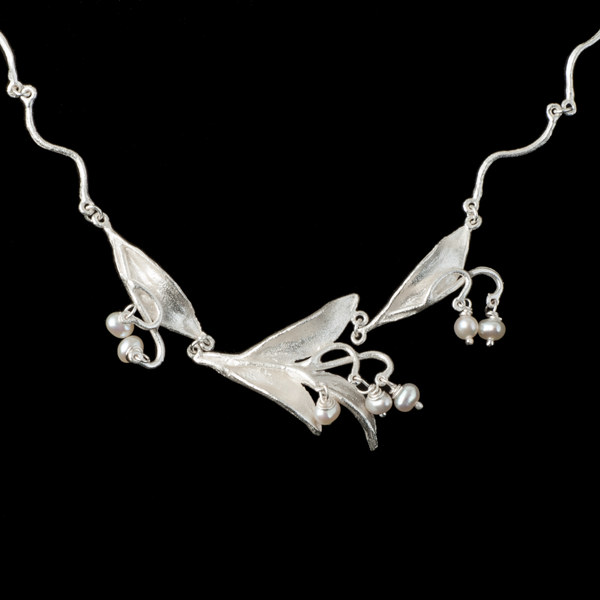 A necklace adorned with silverthorn petals and pearls.