The Icy Ethereal Spire that appears in the dead of Winter. 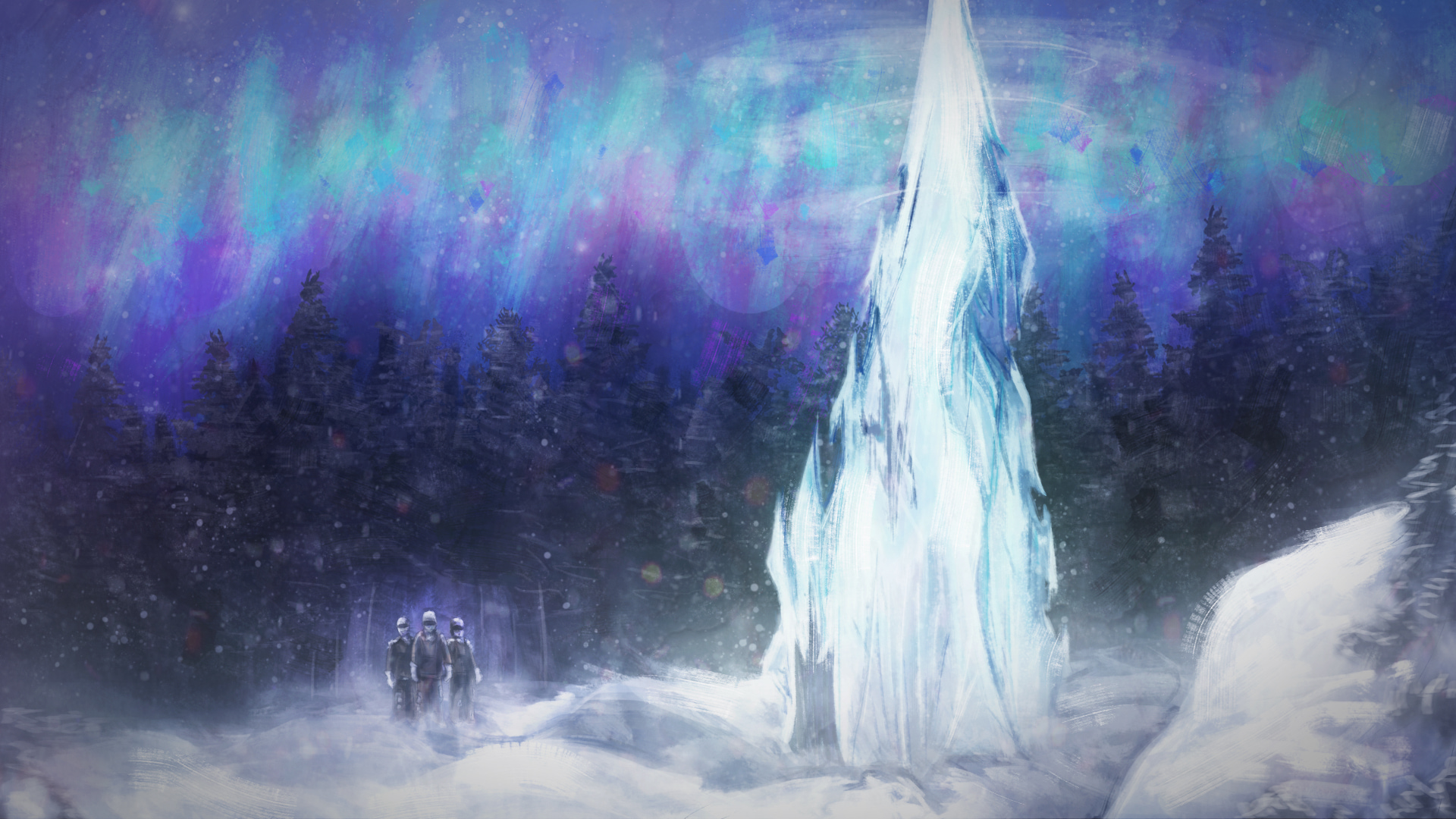 Verglas Spire by JeeZ
The frosty winds of The Interior whip at your skin and burn your eyes. Causing some to see what isn't there, or to miss what is there. On the very coldest days of the year, in the depths of the days past the The Winter Solstice, when teardrops freeze before they hit the ground. All of these mirages could be said to be real and true.   It's a rare sight, usually seen by exhausted and desperate traders making the hardest runs of the year to get enough money to feed themselves through the rest of the winter. As such, many of them end up in Moldatun with stories of the snow outlining a massive tower that stretches into the sky. Or stumbling into a bar somewhere else in Renai stark even days after from hearing the cries of people coming from the icy framework that had appeared in the midst of nowhere.

The Frozen Spire that is unseen.

The Verglas spire is rarely seen and never truly found. Members of the Wizards of the College hypothesize that it's a construct within the Ethereal Plane, perhaps built by an ancient wizard. Or commissioned by a coven of hags that preferred their comforts in the middle of nowhere. The truth of the matter is that there is no information on it. Those that seek it rarely find it, and those that are presumed to have found it are never heard from again.

The Verglas Spire has too little known about it to truly posit who owns it. Ideas swing crazily from the Night Hag Coven idea, to ancient frost dragons who were banished to the Ethereal Plane and built a home to spite their attackers and protect against the ghosts of their victims. The truth may never truly be known, it might be a mix of the above or possibly something completely different.

The Spire is a spire in the truest sense. Usually described as a wide-bottomed, finely pointed steeple that pierces the clouds. With countless windows or divots in the ice, large doorways near the bottom, and always the faint ghostly cries that grow ever louder with the slow revelation of the structure as the ice melts and refreezes showing ever more of the form of the Spire.
DM Information Beyond
The Truth
The Verglas Spire is steeped in mythology and exaggerations, yet the truth is stranger than most might suppose.   The Ethereal Plane is an oddity in the planar realm. It doesn't inhabit it's own understanding of space, instead it overlaps and dominates the connections that are inherent to the Material and others. Most planar magics use the Ethereal Plane as a conduit to step between planes and to the next, making it ever present for nearly all planes. This means it's boundaries are stretched thin.   The Interior is thought to be a place where these boundaries are so thin as to allow things to cross over. Not necessarily spirits, but impressions and dreams. The strongest of these is the Spire. A singular thought forged from countless spirits and forced across the planar boundaries at the weak points where Firn, the Chilled Halfling doesn't have things bound as tightly as they might need to be.   The Spire itself holds no major interior shape and adventurers that enter might be beset upon by any possible creatures. As it isn't the creatures themselves that matter as much as the construct itself. Nobody knows the true power or purpose of the spire, but it is sure to haunt stories and thoughts for countless years more.

This Caelfoc Mission Transcript was shared with the Draconic Councils and the The DraKaise Battalion after the Caelfoc Union lost an Ancient in a search for the Verglas Spire.