The Coast of Teeth

The deadliest coast of all the lands, where foolhardy captains make their final stands.

Ever made the last run of the Coast of Teeth lad? Ever seen those waters rising to the south as the knotted snake writhes and stirs the heart of the world to bring the waters to be our doom?   No? Well I have, I've made the fools run from Aegis, assured by our captain and patrons that the floods are still weeks out. That the Knotted Snake wouldn't bother us this run. And we saw the ships behind us being told the same, the truth of the matter being that nobody had checked. Nobody contracted a wizard, cause the expense was too great.   We'd make it, we'd made it before...   Except we didn't. The ships that left Aegis behind us, we saw them bashed on the coast of teeth as we fled in haste. The floods carried us over the sunken hills and we saw the reason it's called the coast of blood. For behind us, the beasts of the deep came out from the waters as the rising floods tore apart every ship behind us.   We didn't make it out of the Coast of Teeth, we all died there with our brothers. You won't hire one of my ilk to make your foolhardy run.   The docks of Aegis are closed, shove off.
— Tale of the Delayed Groom

The eddies of the southern waters are never steady, often dangerous, and rarely calm. In the summer months, there is no worse place to be than sitting on the waters to the south of Ithungsida. The calamitous floods that rip from the very depths of the ocean floors horrors and artifacts of long-lost eras; do much worse to any ship that sits in their path. The many cliffs and settlements placed high above the water lines hold this to be a truth. However, the winds and flows of water make it a much faster route from Aegis to the cities of Renai , and many captains aim to make the runs as fast as they can to avoid unpleasantness and reap higher rewards. 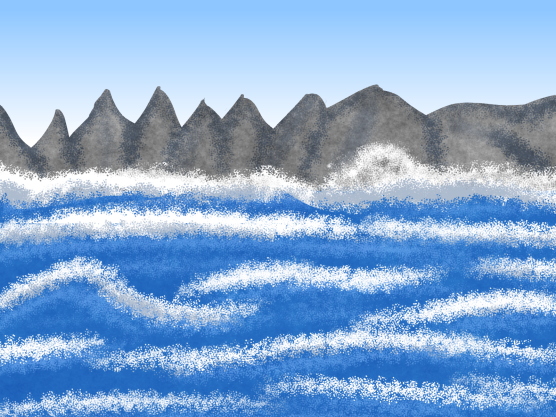 Coast of Teeth by Ashleigh D.J. Cutler
However, the Coast of Teeth is unpredictable and dangerous to cross with even the best precautions. Sunken hills and mountains off the Wall of Teeth make it the most dangerous part of the journey. With water patterns and ocean currents that disobey the laws most mariners have grown accustomed to. Whirlpools, Unrecorded Islands that appear in an instant and vanish with the shipwreck before they can be tracked down.   Many varieties of beast seem to occupy this region, with sightings of Aboleth, huge terrifying creatures that cruise across the sky and have been said to pluck ships from the water and devour them. Things that cause even dragons to fear crossing their paths.   Due to these issues, the region is never crossed by land, rarely by water and never by sky. Even the most foolhardy of Airship pilots not willing to risk their lives in crossing the region. Many crews and companies try to abate this danger by circumventing it and fleeing the land till it is no longer visible. The lucrative nature of the reduced travel times by following this coast means that this is still rather commonly used, wholesale loss of ships and crews in this region are common, but don’t outweigh the profits garnered by it’s use.

In the past, the Coast of Teeth would have been a fourth major mountain range that was loosely attached to the Feng Mountains. However, no records remain of times that the Coast was anything but sunken. The region is thought to be heavily volcanic in nature, causing a high level of unpredictable whirlpools and migrationary patterns in the local predators.

The Coast of Teeth houses a similar amount of rural tribes in the region, as well as a group of Half-Orcs that only frequent the region, known as the IhMuhaisaal

The Coast of Teeth is a incredulously profitable trade route considering it’s the only sea based transit between Eske and Aegis. The Moldatun River is a good one-way transit, however it is plagued by a number of similar issues.

The Tale of the Delayed Groom is a tragic play that talks about a suitor that was left behind in Aegis after a stint of drinking for his Bachelor Party, upon waking he had to find transit to the city of Moldatun where his wedding was to be held. This scene in particular was the refutation of his ability to buy a crew to rush out in front of the rising tides and make a mid-summer run past the coast of teeth.