The original designs for the Court of Mages uniform developed organically in the pre-empire Kingdom of Emberton. While these uniforms were much less organized than their Emberton Empire counterparts, there were some distinct similarities. Many pre-empire designs included a cloak or robe that in some way displayed the mage’s specialization, similar to the colour system utilized during the Emberton Empire. Additionally, there is evidence that suggests the use of jewelry to denote rank, though it was likely less common or formal than during the Emberton Empire. 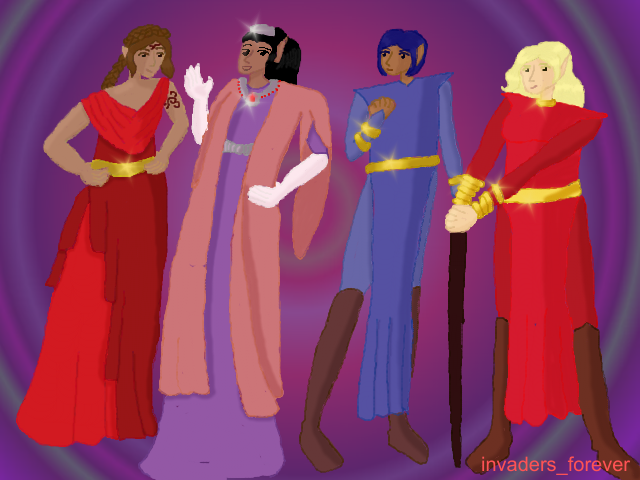 The Emberton Era uniforms were much more formalized and universal than those used before.
After the Emberton Empire was established, the Court of Mages became an official government organization with its own distinctive uniform. The basic form of the uniform consisted of a tighter fighting shirt and leggings, with a loser surcoat over top. The uniform also included boots and a belt.     The first layer of distinction built into the uniforms was colour. The colour of a mage’s uniform determined their specialization within the magical arts. The most common colour was orange, which represented a mage with no true specialization. This is also the colour that novices wore. The second most common colours were grey and purple. Grey uniforms indicated a specialization in potion making and research, while a purple uniform indicated a mage skilled with illusions and enchantments. Thirdly was red, the colour of warrior mages, and green, the colour of healer-protectors. The rarest two colours were blue and black, which indicated divination, and necromancy and conjuration, respectively. 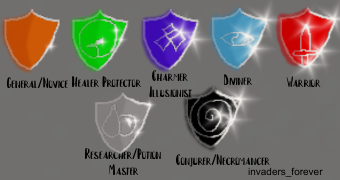 The second thing about a mage determined from their uniform was rank. As was commonplace in Emberton society, rank was determined by how much and what type of jewelry was worn by the individual. Novices wore no jewelry at all. The next step up were apprentices, who wore copper jewelry. Within the apprentice rank, new pieces of jewelry were awarded at various points in training, or after certain achievements. First one would earn ten bracelets, then a necklace, then earrings and rings. Further, there were four ranks contained within the rank of apprentice: apprentice, minor apprentice, major apprentice, and high apprentice. The higher three ranks were determined by the jewels present in their jewelry: amethyst for minor apprentices, sapphire for major apprentices, and ruby for high apprentices.       The next rank up from apprentice was mage. Similar to apprentices, mages gained more jewelry as a sign of rank and achievements, although their jewelry was gold. Mages also had the same sub ranking of minor, major, and high mages, with the same gemstones denoting each rank.     (pic 3)     The final rank of the Court of Mages is where things really get interesting. While the other levels were part of the natural progression up the ranks of the Court, and could have any number of Fae with the same rank at the same time, the Mage Queens had a more limited path to ascension. First off, there was a finite number of Mage Queens holding any one rank at a time. This meant that there could only be 21 minor Mage Queens and 14 Major Mage Queens, and seven High Mage Queens. Additionally, a new minor Mage Queen had to be chosen by all seven High Mage Queens out of the existing High Mages, while new Major Mage Queens were chosen from the minor mage queens and so on. The final limit to the mage Queen ranks was that there had to be one High Mage Queen from each specialization at all times.     The ranking designation for the Mage Queens was similar to that of the other ranks, but the Mage Queens started on that rank with a crown. They also wore jewelry made of silver.     (pic 4)

After the Age of Blood, Queen Diamond 1 re-established an empire and ascended the throne. During this time, many old systems from the Emberton Empire were revamped to fit the new Faerie Empire. One of these was the Court of Mages. Since the Diamond Dynasty focused on allowing regional cultures to continue to thrive as a means of keeping the Empire together, there was greater variation in the uniforms.     (pic 5)     Like the Emberton design, these uniforms had colours to define specialization. However, the uniform itself typically consisted of a robe or similar garment, with a belt and cloak. Also different was the ranking system. Instead of the jewelry centric style of the Emberton uniforms, these newer uniforms had badges. The ranks within the Diamond era Court of Mages were: novice, learner, mage, high mage, and mage queen, with warrior mages having an entirely different system to comply with the ordinary Imperial Military.     The Badges were made of gold with paint for the lower ranks and gemstones inlaid for the mage queens.     The Court of Mages was disbanded during the Fable Dynasty. Some of the traditions carried over to later magical organizations, but neither uniform was officially used again

Court of Mages: Emberton At Its “Finest”

The Court of Mages is generally considered to be one of the best representatives of Emberton culture: extremely structured, class based, rigid, and ranked by jewelry.     The Court of Mages itself was founded circa 30 Emberton as a means of maintaining and controlling the mage class of both Emberton proper and the newly acquired territories making up its Empire. The Court recruited fae with a certain level of magical power between the ages of 80 and 700. Anyone older would not be recruited due to the risk of them maintaining and spreading their local magical traditions within the Court.     New recruits were considered novices, and studied and learned in classes with other novices. After passing a series of tests, they would become apprentices and choose their specialization. This is an example of how the Court of Mages embodied the Embertonian ideals of strict ranking and class systems. Additionally, mages were one of the few classes allowed to wear jewelry and armour.     Interestingly, the Court of Mages didn’t actually support the class system as much as it would appear to. While many other skill based class organizations would occasionally recruit individuals of different standing if they were skilled enough, the Court frequently recruited from lower classes. For most of the Emberton Empire, anyone who could demonstrate some level of higher magical power had a relatively easy way up in an otherwise rigid system.
Item type
Clothing / Accessory
Owning Organization
Court of Mages

Remove these ads. Join the Worldbuilders Guild
Other Cultural Traits

Some of the art is taking longer than I expected so I'll add that either this week or after the challenge.

Nice article! The explanation of all the different ranks and their differences of uniform was well done. Also kind of interesting how silver is used for the highest rank. Is there any particular reason for this?   You already added some nice images to give an idea how the uniform is supposed to look :)

Nice article even without all the pictures :D I like the idea of using jewellery to indicate rank - though does that means that none else in that society is allowed to wear jewellery? Or is it only jewellery of a certain style - or even a certain material? I think people would really chafe at that :p

I really like the way the jewelry is used to indicate rank, with a mixture of metal and gemstones. No 'just add more stripes and maybe some stars'.