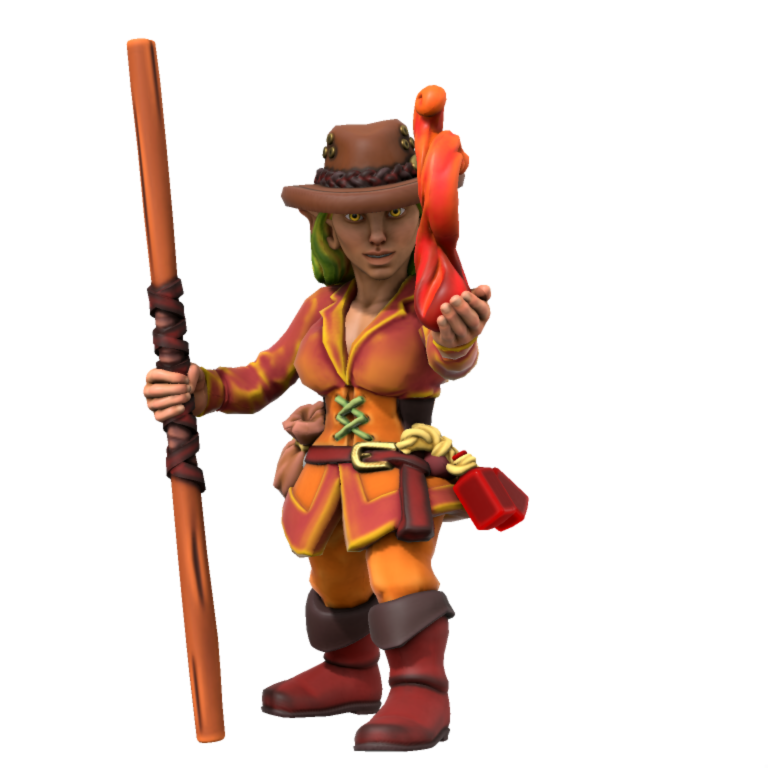 Mieppe Quindal A.K.A Scorch   BACKGROUND: A blendng of Merchant and Pirate
I was born into a proud merchant family who trades the best papers, parchments, velums, inks, quills, and bound books in all Amar. I, too, loved paper and all the differing colors various types of paper burned when fed to a flame. This did not please my family, especially when I accidentally burned down a storehouse, I was sent away to study under my fourth uncle twice removed from my mother in the Academy of Magics.
I excelled at magic and learned as much fire magic as I could. Upon graduating, I returned to my family who still cared nothing for my skills, not even when it came to the papers and inks I used when writing spells. They even dared to suggest that, now that I had my fancy for fire under control, I put aside this childish hobby and get down to real business!
Well, that never happened! I left the family and Treeheim for the lands of the tall folk. There, I soon discovered that ships were the greatest way to attain a fortune and forge your own destiny. I eventually discovered the Mookwaker, a fast ship with a daring crew. They took me on as their Ship's Mage with a promise to never burn Moonwaker. Ha! I would never burn the best way to forge my destiny ... one raid at a time.   LINK FOR THE TOKEN IMAGE (not the full-body image here): https://www.worldanvil.com/uploads/images/610f0bc26e503bd4a959c63f5cb13575.png

Someday I will amass enough loot to buy my own ship and chart my own destiny.

The ship is most important -- without a ship we can't forge our destinies.

Once someone questions my courage, I never back down no matter how dangerous the situation.

CANTRIPS   Fire Bolt V,S Range: 120'
Using her Spell Attack, Scorch deals 1d10 Fire Damage if she hits the target.   Ray of Frost V,S Range: 60'.
Scorch makes a Spell Attack against a target within range, dealing Cold Damage to the target and reducing its speed by 10' until the start of her next turn.
CANTRIPS   Prestidigitation V,S Range: 10' Lasts up to 1 hour.
Scorch can cast this spell three times to have various effects going at one time. Any more than three and the new casting will cancel out a previous one. The various effect Scorch can cast:
1) Harmless sensory effect like: a shower of sparks, a puff of wind, faint musical notes, or an odd odor.
2) Light ot snuff out a candle, a torch, or a small campfire.
3) Clean or soil an object no larger than 1 cubic foot.
4) Chill, warm, or flavor 1 cubic foot of nonliving material for the duration.
5) Make a color, mark, or symbol appear on an object or a surface for the duration.
6) Create a nonmagical trinket that can fit in the palm of Scorch's hand and lasts until the end of her next turn.

LEVEL ONE   Burning Hands V,S Range: 15' cone.
Each creature in the cone must make a DEX DC for 1/2 damage or take the full 3d6 Fire Damage. If cast from a Level Two spell slot, it deals 4d6   Detect Magic (ritual) V,S Range: Self. CONCENTRATION up to 10 minutes.
Scorch can sense magic that is not blocked by 1' of stone, 1" of metal, or 3' of wood/dirt and is within 30' of her.   Mage Armor V,S,M Range: Touch. Lasts 8 hours.
Scorch touches a chosen UNARMORED creature and their AC is changed to 13 + DEX. Other bonuses stack with this spell.
LEVEL ONE   Magic Missile V,S Range: 120'
Scorch can create 3 glowing darts that simultaneously strike one or several targets within range, one dart per target. Each darts deals 1d4+1 Force Damage. If cast from a Level Two spell slot, Scorch creates 4 darts instead.   Shield REACTION when Scorch is hit with an attack or targeted by magic missile. V,S Range: self.
Until the start of Scorch's next turn, she gains AC + 5 including against the triggering attack. Scorch takes no damage from Magic Missile. Lasts until the start of her next turn.   Thunderwave V,S 15' cube from Scorch.
Scorch creates thunder that sweeps out from her up to the Range of the spell. It makes a booming sound that can be heard 300' away and pushes unsecured objects 10' away from her. Each creature in range must make a CON DC for 1/2 damage or take 2d8 Thunder Damage. Those who fail their save are also pushed 10' away from Scorch.

LEVEL TWO   Cloud of Daggers V,S,M Range: 60'. CONCENTRATION up to 1 minute.
Scorch picks a point within range and creates a 5' cube filled with spinning daggers. Any creature entering the area or starting its turn in the area takes 4d4 Slashing Damage.   Flaming Sphere V,S,M Range: 60' CONCENTRATION up to 1 minute.
Scorch can make a flaming sphere appear in an unoccupied space within range. as a bonus action, Scorch can move the sphere up to 30', leaping up 5' or across 10'. Any creature that ends its turn within 5' of the sphere or is struck by the sphere when Scorch moves it must make a DEX DC for 1/2 damage or take the full 2d6 Fire Damage. The flaming sphere also sheds bright light in a 20' radius and dim light for an additional 20'.
LEVEL TWO   Misty Step BONUS ACTION. V Range: self.
Scorch can teleport up to 30' to an unoccupied space that she can see.   Web V,S,M Range: 60'. CONCENTRATION up to 1 hour.
Scorch can create a 20' cube of webs placed within range and must be anchored between walls or trees. The webs are 5' deep whether they are horzontal or vertical. Each creature that enters the area or starts its turn in that area must make a DEX DC. On a fail, the creature is restrained as long as it remains in the web or it breaks free. A creature can use its action to break free STR DC.
The webs burn. Each 5' cube of webbing burns away in 1 round, dealing 2d4 Fire Damage to any creature that starts its turn there.


BRAUNIE FEATURE: Spell Cunning
Scorch has advantage on all Intelligence, Wisdom, and Charisma saving throws against magic.   BRAUNIE FEATURE: Natural Illusionist
Scorch knows the cantrip Minor Illusion. This spell does not count against her Cantrips Known.
Minor Illusion S,M Range: 30'. Lasts 1minute.
Scorch can create a sound or an image of an object that can fit inside a 5' cube. If a creature successfully uses the INVESTIGATION SKILL DC to examine the illusion it becomes faint or muted to that creature. Physical interaction with an image, especially if something passes through it, will reveal its an illusion.   BRAUNIE FEATURE: Speak With Small Beasts
Scorch can communicate simple ideas with Small or smaller Beasts.
PIRATE FEATURE: Bad Reputation
It never takes long for folks in a port town or city district to learn to fear Scorch's love of fire magic. In most places she can get away with minor criminal offences.   WIZARD FEATURE: Arcane Recovery During one Short Rest a day, Scorch can regain 2 spell slots that have been used. This is either one Level 2 slot or 2 Level 1 slots.   WIZARD: WAR MAGIC FEATURE: Arcane Deflection
When Scorch gets hit by an attack, she can use her Reaction to add +2 to her AC or +4 to the saving roll. When she uses this feature, she can't cast spells other than cantrips until the end of her next turn.   WIZARD: WAR MAGIC FEATURE: Tactical Wit
Scorch adds her INT to her Initiative.