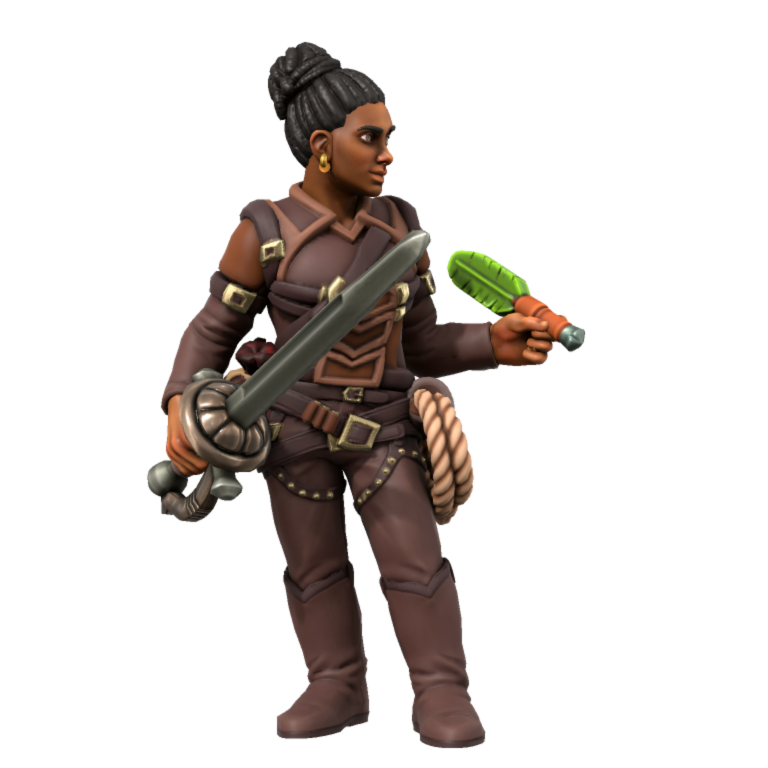 Dubiry Tanner A.K.A. Darts   BACKGROUND: A blending of Marine and Pirate
I grew up in an orphanage in Swampshoal Point. Running the streets and finding trouble are such fond memories. Memories of being caught by the town watch and hauled before the magistrate ... not so fond. There, I was given a choice: serve with the League Marines or go to an abbey in the Far Hills. Ugh! I chose the League Marines.
Battling pirates on the high seas, and even other navies on occassion, was thrilling. But then my commander got so greedy, he blamed his bad thieving skills on me. Of course the League Marines believed his rank rather than the truth. I escaped the brig, used my much better thieving skills to reveal his lies, then left the League Marines.
No longer a marine, the rogue life became my life. Still, I missed the sea and being able to travel to many places. My fortunes changed when I joined the Moonwaker crew. Piracy on the seas is just the thing for me!   LINK FOR THE TOKEN (not the full-body image here): https://www.worldanvil.com/uploads/images/2a05e27344e9ae1f54b22d8985968e44.png

To act when others quake in fear -- this is the essence of the swashbuckler.

Starting a tavern brawl then sitting back to watch how it all unfolds to get a feel for a port is not REALLY a flaw ... ?

HUMAN FEATURE (Chosen Feat): Defensive Duelist
When wielding her rapier, if Darts gets hit by a melee attack she can use her Reaction to add her proficiency bonus to her AC for that attack.   MARINE FEATURE: Steady
Darts can move at twice the amount of Travel Pace time each day before being subject to the effect of a forced march. Darts can also automatically find a safe place to land a boat on shore, provided such a route exists.   PIRATE FEATURE: Hardship Endured
Darts once hid in the bilge of a treasure ship, surviving on brackish water and foolhardy rats. When the Moonwaker caught up to the treasure ship, she sabatoged the treasure ship's defences, giving the Moonwaker an easy victory.   ROGUE FEATURE: Sneak Attack
Darts can deal extra damage if she has advantage on the attack, an ally is within 5' of the target, and the target is not incapacitated; all of which is negated if Darts has disadvantge. The additional damage is 2d6 .
ROGUE FEATURE: Cunning Action
During her combat turns, Darts can take a Bonus Action to Dash, Disengage, or Hide.   ROGUE: SWASHBUCKLER FEATURE: Fancy Footwork
When Dart makes a melee attack during her turn, the target can't make an attack of opportunity for the rest of Dart's turn.   ROGUE: SWASHBUCKLER FEATURE: Rakish Audacity
1) Darts can add her CHA (+1) to her Initiative.
2)Darts can also use her Sneak Attack if she does NOT have advantage on the attack, no other creature is within 5' of her, and she doen't have disadvantage on the attack.