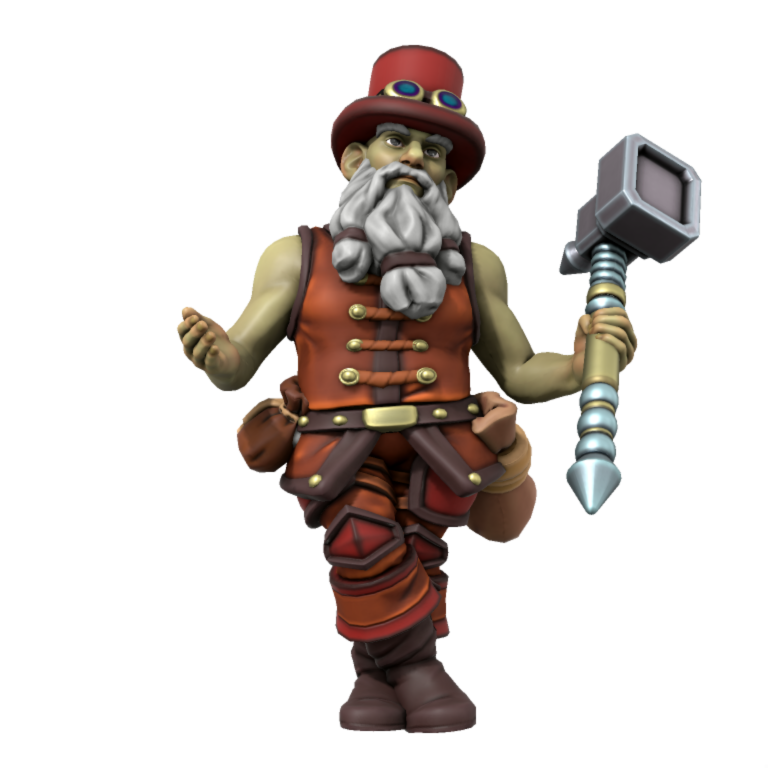 by Dazzlinkat
Senses
Darkvision 120'. Bright Vulnerable: when in bright light or daylight, all his attacks AND perception are at Disadvantage UNLESS he is wearing his Goggles of Day (which are on his hat when not in use).
Passive Perception: 15 (10 if under the Bright Vulnerable Condition)
INITIATIVE: +2
Languages Dwarven, Common
Proficiency Bonus +2
Challenge Rating L3

Agnar Unzertak A.K.A. Curly   BACKGROUND: a blending of Gladiator and Pirate
It all started deep beneath the world. Dull, drab, plain, TASTELESS until the wurms shuddered the deep and I fled up to the world. I was a young brute but the upper dwarves took my in ... to their arenas. In the arena I learned the art of showy combats. I thought I was happy. Then, I discovered spices.
Oh, my stars and garters, but they were perfection! I HAD to learn the mysteries of spice so I escaped the arena, and the upper dwarves. I spent years wandering the lands gathering spices and learning how best to use them.
One miserable noontime, a chimera tried to eat me in the cursed bright of day. In one last desperate move, I tossed open my powdered peppers pouch and flung it all into the air. All three heads breathed it in. They were so busy coughing and sneezing I made my escape. Spices saved my life. PEFECTION!
Eventually I found my way to the Moonwaker where I cook for them with my spices. I am finally a CHEF!   LINK FOR THE TOKEN IMAGE (not the full-body image here): https://www.worldanvil.com/uploads/images/312dba90366396a47acff73f7c98cf7e.png

The world is in need of new recipes and bold chefs.

I idolize Prunehilda from the old tales and replace her long lost spices, like powdered snakebite, with the spices of today.

When I get too emotional, like when I discover a new spice or recipe, I often lose control and suddenly enlarge myself.

DWARVEN FEATURE: Stonecunning
When Curly makes a HISTORY check related to stonework, he gets double proficiency. HISTORY(Stonework) +3   ROCK DWARF FEATURE: Resilience
Curly has advantage on saving throws against poison, spells, and illusions. Curly also has resistance to being charmed or paralyzed (lasts for 1/2 duration).   ROCK DWARF FEATURE: Bright Sensitivity
When in bright light or daylight, all his attacks AND perception are at Disadvantage UNLESS he is wearing his Goggles of Day (which are on his hat when not in use).   ROCK DWARF FEATURE: Enlarge
For 1 minute, Curly can grow himself and his stuff to become Large sized. Strength-based attack bonuses are doubled, and strength-based weapon dice are doubled as well. Any Strength Checks or Saves Curly makes while enlarged are with advantage. Curly can enlarge once per Short of Long Rest.   ROCK DWARF FEATURE: Invisibility
CONCENTRATION. Curly and his gear can turn invisible for up to an hour. This effect ends when he loses concentration, attacks, or uses Enlarge. Curly can go invisible once per Short or Long Rest.
GLADIATOR FEATURE: By Popular Demand
Curly can always find a good fight for money. This can be anywhere from an arena, to a pit, to a fight club, or to a rowdy tavern.   FIGHTER FEATURE: Fighting Style: Dueling
When wielding ONLY a one-handed weapon, Curly gets +2 bonus to damage with that weapon.   FIGHTER FEATURE: Second Wind
Curly can use a bonus action on his turn to Regain HP 1d10+3 . Curly can do this once per Short or Long Rest.   FIGHTER FEATURE: Action Surge
Curly can take one additional action on top of his regular action and possible bonus action. Curly can do this once per Short or Long Rest.   FIGHTER: CHAMPION FEATURE: Improved Critical Curly's weapon attack score a critical hit on a natural 19 or 20.

NET
Thrown (5'/15') A net does no damage. Instead, it restrains a creature Large or smaller until its freed. A net has no effect on shapeless creatures. Escaping the net, or someone helping the trapped creature to escape, requires a Strength DC: 10. Net Attack: +6 When Enlarged Net Attack +10   WARHAMMER OF MOON ROCK
Versatile but Curly prefers to wield it one-handed only. This hammer glows with gentle moonlight at night or in the dark. It deals an additional +2 damage in the dark.
1) Normal Size Melee Attack: +6 . Damage in Light: [roll1d8+4|1d8+4] Bludgeon Damage. Damage in Darkness: [roll1d8+6|1d8+6] Bludgeon Damage.
2) Enlarged Size Melee Attack: +10 Damage in Light: 2d8+6 Bludgeon Damage. Damage in Darkness: 2d8+8 Bludgeon Damage.   ITEMS
Belt Pouch, Spice Pouch, Powdered Peppers Pouch, Prunehilda's Cook Book, 2 x Potions of Healing Regain HP: 2d4+2 , GOLD: 30