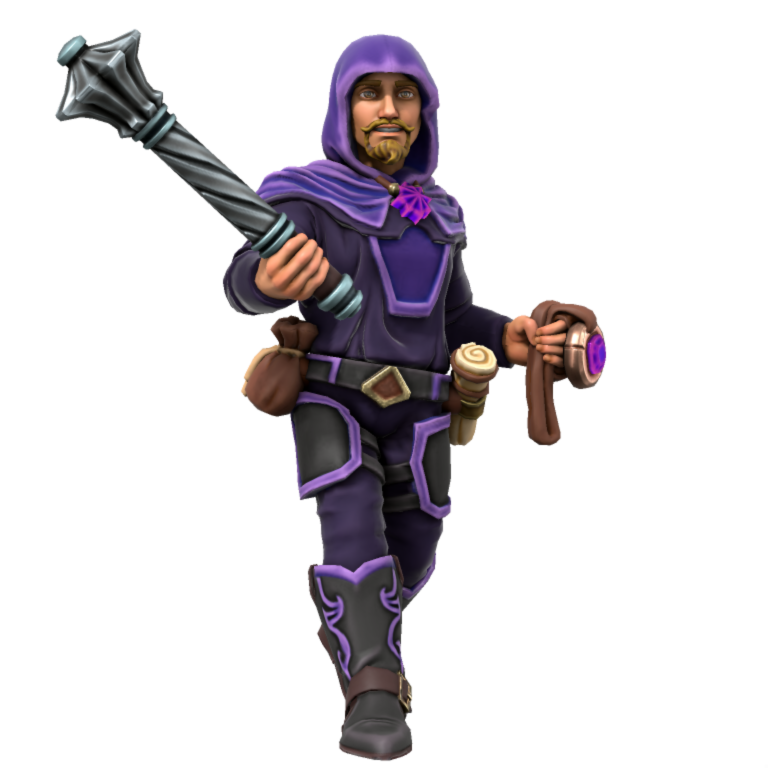 Jymus Sandborn A.K.A. Bones   BACKGROUND: a blend of Fisher and Pirate
Like all youngmen of Lobster Point, I joined my father and brothers on the family fishing boat, bringing in what fish we could from the sea. I was not yet growing my man hairs when we were caught in a sudden raging storm. Our ship was lost and only I survived by clinging to half a dinghy. I stared up into the eye of the storm as I rode those mountainous waves and swore I would be faithful to the god of storms. The eye winked at me. Ever since, I have devoted my life to Thirro, God of Storms.
Once I earned my cleric cloth, I took to traveling the coasts and seas, looking for a congregation in need of a me. Not until I came upon the Moonwaker, did I find one. People may frown on piracy, but this crew not only embraces the tempest, they are eager to BE the tempest! Just the souls Thirro approves of.
I am devoted to my crew and shall tempest with them, wherever that may be.   LINK FOR THE TOKEN IMAGE (not the full body image here): https://www.worldanvil.com/uploads/images/c24e7ca409132027a066574d2db8f6c1.png

The sea is freedom -- the freedom to go anywhere and do anything.

Thirro spared me during one of his terrible storms, and I will honor His gift.

I can't help but pocket loose coins or trinkets I come across when I think no one is looking.

Bones uses his Thirro Talisman as a spell focus instead of material components. The spells listed are his favorites.   Spell Slots: Level 1= 4. Level 2 = 2
Spell Save DC: 13
Spell Attack Modifier: +5   CANTRIPS   Light V,M Bones must cast this on an object, usually his mace, The object will provide bright light in a 20' radius and dim light for an additional 20. This spell lasts an hour.   Sacred Flame V,S Range: 60' Bones casts this on a target who must roll a DEX DC or take 1d8 Radiant Damage.   Thaumaturgy V Range: 30'. Lasts up to 1 minute. There can be up to 3 effects going at a time. A fourth casting will cancel out one of the other three. Bones can dismiss any effect as an action. Bones can create one of the following effects:
1) Bones' voice booms three times louder than normal.
2) Bones makes flames flicker, brighten, dim, or change color.
3) Bones causes harmless ground tremors.
4) Bones creates a sudden noise, like a rumble of thunder, a raven's cry, or ominous whispers, to happen anywhere within range. Lasts only an instant.
5) Bones instantly causes an unlocked door or window to fly open or slam shut. Lasts only an instant.
6) Bones can alter the appearance of his eyes. He likes to make them to crackle with lightning.

LEVEL 1 SPELLS Spell Slots: 4   Fog Cloud (Domain Spell) V,S Range: 120'. CONCENTRATION up to 1 hour.
Bones creates a 20' sphere of fog centered anywhere within range. The fog spreads around corners and its area if heavily obscured. If Bones casts it from a Level 2 Spell Slot the fog covers 40'.   Guiding Bolt V,S Range: 120' This spell requires a Spell Attack to hit a target within range. Guiding Bolt Attack.
Bones deals 4d6 Radiant Damage to the target and the next attack roll made against the target gets advantage.
If Bones uses a Level Two spell slot the damage is 5d6 Radiant Damage instead.   Healing Word V BONUS ACTION Range: 60'
Bones chooses a creature within range to Regain HP 1d4+3 . This spell has no effect on undead or constructs.
If Bones uses a Level Two spell slot the target Regain HP 2d4+3 .   Thunderwave (Domain Spell) V,S Range: 15' cube.
Bones creates thunder that sweeps out from him up to the Range of the spell. It makes a booming sound that can be heard 300' away and pushes unsecured objects 10' away from him. Each creature in range must make a CON DC for 1/2 damage or take 2d8 Thunder Damage. Those who fail their save are also pushed 10' away from Bones.
LEVEL 2 SPELLS Spell Slots: 2   Hold Person V,S,M Range: 60'. CONCENTRATION up to 1 minute.
Bones chooses one huminoid type creature within range. The creature must succeed at a WIS DC or be paralyzed for the duration of the spell.   Prayer of Healing V Takes 10 minutes to cast. Range: 30'.
Bones usually casts this during a Short or Long Break. Bones chooses up to 6 creature that are not undead or constructs to regain 2d8 +3 HP .   Silence V,S Range: 120' CONCENTRATION up to 10 minutes.
Bones can center a 20' radius sphere of silence anywhere within range. Any creature or object completely inside the sphere is immune to thunder damage and are deafened. Any verbal spell cannot be cast from within the sphere.   Spiritual Weapon V,S BONUS ACTION Range: 60' Lasts for 1 minute.
Bones creates a spiritual mace that deals 1d8 + 3 Force Damage to a creature within 5' of it. As a bonus action, Bones can move the spiritual mace 20' to strike another creature within 5' of it. Spiritual Mace Damage


HUMAN FEATURE: Alert
Bones can't be surprised if conscious. Other creatures don't gain advantage on attack rolls against Bones if they are hidden from him. Bones gain +5 to Initiative.   FISHER FEATURE: Harvest The Water
Bones gains advantage when using fishing tackle and can catch enough food to feed up to ten other people each day.   FISHER FEATURE: Fishing Tale
I once saw a fish so huge that when it jumped out of the sea it turned day into night.
CLERIC: TEMPEST FEATURE: Wrath Of The Storm
When Bones takes a hit from a creature he can see within 5' of him, he can use his reaction to make the creature make a DEX DC or take 2d8 Lightning Damage. On a successful save the creature takes 1/2 damage.   CLERIC: TEMPEST FEATURE: Channel Divinity Bones can use one option once per Short of Long Rest.
1) Harness Divine Power As a Bonus Actions, Bones can touch his holy symbol and regain one Level One Spell Slot.
2) Destructive Wave When Bones rolls lightning or thunder damage, he can choose to deal maximom damage instead of rolling.

MACE OF STORMS Melee Attack: +3
When wielded inside: 1d6 +1 Bludgeon Damage.
When wielded outside: 1d6 +3 Bludgeon Damage.   SCROLLS
Each scroll has the uses marked. Once the last use is cast, the scroll dissolves into ash
1) Mass Healing Word V (read from scroll). Range 60'.
Bones can choose up to six creatures within range to Regain HP 1d4 +3 2 Uses.
2) Call Lightning V (read from scroll). Range: 120'. CONCENTRATION up to 10 minutes.
Bones creates a storm cloud 10' tall by 60' radius centered on a point 100' above him within range and as long as he can see said point. Bones chooses a point beneath the cloud and each creature within 5' of that point must make a DEX DC or take 3d10 Lightning Damage. Those who make their saves take only 1/2 damage. If this spell is cast in stormy conditions, the damage becomes 4d10 Lightning Damage. 1 Use.   ITEMS
Belt Pouch, Gold: 28, Goggles of Night: provides Darkvision 60'