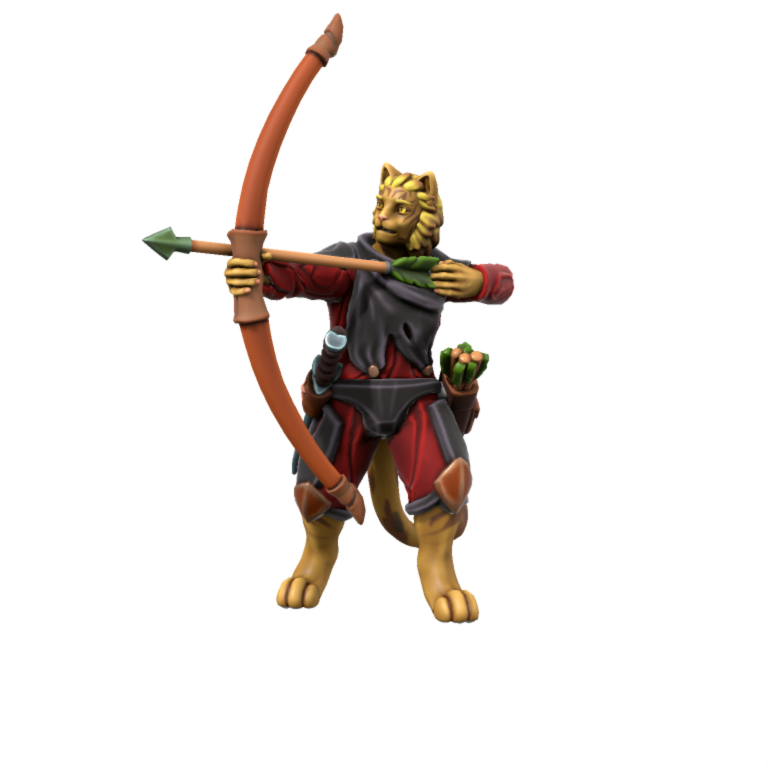 Penge-Ra-Orr A.K.A Bane   BACKGROUND: A blending of Outlander and Pirate
I was born among the Uzachee in the Emeraldpine Forest to a Engi mother. As I grew, I developed a knack for the bow and a heart for war. My training grew harsh but I embraced learning to weave magic through my bow to my arrows and became a Wiggam Warrior.
There were few chances for war or even marauding as few dared to enter our forest. I left the Emeraldpine to go marauding on my own. There was little to bring glory to me or the Uzachee until I came upon the Moonwaker. Now I am marauding with glory!   LINK FOR THE TOKEN IMAGE (not the full-body image here): https://www.worldanvil.com/uploads/images/2e5989f1dd9b92a28331a9d6900d333d.png

Glory in battle for me and my tribe!

I shall always love the Emeraldpine Forest. Someday, I shall retire there.

CANTRIP Prestidigitation: Range 10'. Lasts up to one hour. Banes can choose to do one of the following effects. If cast multiple times, only three effects can be active at one time.   1)Sensory effect like shower of sparks, puff of wind, faint musical notes, or an odd odor.
2)Light or snuff a candle, torch, small campfire instantly.
3)Clean or soil an object no larger than 1 cubic foot instantly.
4)Chill, warm, flavor up to 1 cubic foot of nonliving material.
5) Make a color, small mark, or symbol appear on an object or surface.
6) Create a nonmagical trinket or illusory image that fits in Bane's hand and lasts until Bane's next turn.

GHENI FEATURE: Feline Agility
Bane can move double his speed on his turn of combat until the end of that turn. Bane cannot use this feature again until he spends a turn in one place.   GHENI FEATURE: Cat's Claws
Bane has a Climbing Speed of 20'.   PIRATE FEATURE: Bad Reputation
In proper ports, the dock folk know better than to complain if I get rowdy and rough
FIGHTER FEATURE: Fighting Style: Archery
Bane gains +2 bonus to ranged attack rolls.   FIGHTER FEATURE: Second Wind
Once per short or long rest, Bane can use a bonus action to Regain HP 1d10+3 .   FIGHTER FEATURE: Action Surge
Once per short or long rest, Bane can take one additional action on top of his regular action and a possible bonus action.

Claws Melee Attack: +4 , 1d4 + 2 1d4+2 Slashing Damage   Cutlass Melee Attack: +2 1d6+2 Slashing Damage   Longbow Range (150'/600'). Range Attack: +5 1d8+1 Piercing Damage, add Beguiling Arrow Effect 2d6 Psychic Damage, add Grasping Arrow Effect 2d6 Poison Damage   20/20 Walloping Arrows: Creature hit must make a STR DC: 10 or be knocked prone.
FIGHTER: ARCANE ARCHER FEATURE: Arcane Shot 2 USES/ Rest (long or short)   Arcane Archer DC: 11   Once per turn when Bane fires an arrow during his Action, he can choose one of the two effects listed below:   Beguiling Arrow: When Bane hits the target with an arrow it takes an extra 2d6 Psychic Damage and Bane chooses an ally within 30' of the target. The target must roll a WIS DC or be charmed by the chosen ally until the start of Bane's next turn. The effect will be canceled if the chosen ally attacks the target, deals damage to it, or forces it to make a saving throw.   Grasping Arrow: When Bane hits a creature with an arrow, grasping and poisonous brambles wrap around the target. The target takes an extra 2d6 Poison Damage and its speed is reduced by 10'. Each turn the target moves more than 1' without teleporting, it takes 2d6 2d6 Slashing Damage The target or any creature may remove the bramble with a STR DC which ends the effect. The effect lasts 1 minute unless Bane uses this same effect again or its removed.
ITEMS
Belt Pouch, Potion of Healing Reagin HP 2d4+2