Episode 3: A Song of Ice and Ram Campaign

Scars all across his body show the types of hardships Damakos had to go through. Born into the Abyss to an Incubus for a father, and a tiefling for a mother, life wasn't too bad. That is, until his father exiled Damakos, his mother, and his sister. Stripped of their name, they were forced to live in the worst of conditions, in the equivalent to the slums of the Abyss.


Growing up in the slums forced Damakos to toughen up very quickly. The killing started as a necessity, a protective measure to keep his family safe. Then it turned into a hobby, a joy. The more he ended up killing, the better he felt. He began challenging any who came near to fights. He crafted a new family name for he and his family to take; Inkakriz, Abyssal for "bloodied one". 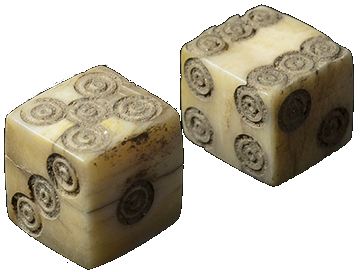 Some dice from Damakos's dice set. Dice were very commonly used for basic games, as well as gambling. Sometimes the best way to find information on a mark would be for Damakos to gamble his way into an informant, or just continue playing dice and seeing what sorts of people he attracts.

Getting lost in the Abyss was no difficult accomplishment, but finding one's way out certainly says something about their character. At a very young age, Damakos found himself wandering around his father's palace. In the palace, he found a peculiar painting of men who were covered in bone, and the bones appeared to be a part of them. Upon touching this painting, he was taken to another layer of the Abyss entirely. Upon his return, he had very strange powers, and he found himself unable to explain where he went or how he got back. Shortly after this event, his father exiled Damakos, along with his mother and sister.

The major events and journals in Damakos Inkakriz's history, from the beginning to today.

The list of amazing people following the adventures of Damakos Inkakriz.