A child of the streets, Riot was found by one of the predominantly shifter mercenary group, Band of the Night Fox. There she trained under a master samurai, but with magic being awoken in her, she shifted to sword and spell.

A child of the streets, Riot was found by one of the predominantly shifter mercenary group, Band of the Night Fox. There she trained under a master samurai, but with magic being awoken in her, she shifted to sword and spell.

A shifter born and abandoned. She was picked up but a mercenary group called the Band of the Night Fox. For most of her life, she traveled and fought with them, learning swordsmanship, then eventually the basics of magic. They passed by Millmire City after she joined back up with them following her first attempt to start a new life. Here she hopes to settle down, hone her skills, and live a good life.
Age
24
Date of Birth
14th of Olarune
Gender
Female
Eyes
Electric Blue
Hair
White
Skin Tone/Pigmentation
Tan
Height
5'7"
Weight
167lbs

Scar over the bridge of the nose, and three on the right cheek. Electric blue eyes with slightly slitted pupils. Top and bottom canines are fangs. Her nose is a a bit of hawk nose.

A black outfit that is common in the abnd of the Night Fox. A usually colorful or white haori. Her exploring outfit/Riot Gear is a heavy vest lined with chain mail, black tanktop, grey/black camo pants, dark boots.

Her swordplay and her study of magic. Shifting to gain her Hyena Bite.

Backstory:
Abandoned as a child when her parents found out that she was a shifter (or so she believes). She was found by a small mercenary group who traveled around dealt with monsters, not so good people, and some escort missions for nobles. After a about running 19 or so years with them, Riot took her earnings and went to go settle down in city life. Now with a handful of gold to her name, her weapons, and equipment, she now comes to this city to find new work and a new life. She hopes her sword skills and basic knowledge of magic will help her.

The night she was found: Riot was found when a horde of monsters attacked a small city, already living on the streets at this point. The Band of the Night Fox was called in, Ren Blacktail found her first, as she was holding off a swarm of rats with a broken short sword. The city district was out of control, bigger, badder creatures wreaking havoc. Ren took Riot and got her out of the city limits, while the Night Fox was doing all that they could.

Once the dust settled, and they regrouped out of the city, The Band, excited to be, essentially, adopting a new shifter child all tried to come up with names, Ratslayer, Fang, Snowy, Bitey, Street were all rejected. It wasn't until one of the shifters, another Longtooth (Riot doesn't remember them, she never saw them again afterwards) gave her the name Riot, because he was impressed by her tremendous display of bravery.

From then on, Riot had been with Band of the Night Fox until she came across Millmire City. Her first attempt at stable living crashed and burned, but she was willing to try again here.

Outside of the copious amount of almost useless knowledge of the Night Fox, Riot is surprisingly intelligent. However, while she is book smart, common sense sometimes eludes her.

Her learning speed is faster than 90% of the Night Fox, her aptitude for battle is above average, and her ability to access the best outcome to either avoid bloodshed or cause more is superhuman.

Riot had found her memory is impeccable, but not perfect like some wizards or rogues she had met. If engrossed with a subject, Riot will commit it to every fiber of her being, like cloud types and weather patterns.

19 years with the Band of the Night Fox. A one night bouncer job with Sky Sea Tavern. Expedition(s) with Camielle.

Being welcomed into the Band of the Night Fox.
Perfecting her first spell.
Surviving 24 years.
Successfully hustle a tavern with Comedy & Tragedy
Bedding 14 nobles - 9 of them she didn't get caught.

As much as she had fun, Riot is a little upset she did get throttled by Bruz in the tournament. She will get ready for Round 2.

Getting impaled in a fight against something she was overconfident against, and it cost her pieces of a few organs.

Being caught 5 times of the 14 bedded Nobles.

The one time Riot broke her word to a friend haunts her. It cost her more than she could ever imagine. It still haunts her, Riot will suffer from nightmares every so often.

Ranked most to least: (until I understand these better)

Riot will try to do what is right, but sometimes, she does understand that sometimes, the less savory things must be done. She has killed for gold, for silver, and for less, she has prevented a deal between nobles to go through, she has stolen money from people who couldn't spare it. Riot has done bad things, but tries to do good to outweigh the bad.

Her philosophy is "Live by your choices, don't back down from the consequences that come from them." Riot might regret choices and decisions she has made, but she never tried to avoid the trouble from them. Her word to others might be her bond, but her word to her self is the most important.

So while she will sleep with anyone, she only forms romantic relationships with women and female identifying people.

She also will enjoy group sex, exhibitionism, and dating/being in an interracial relationship.

Female, but won't get upset if she's mistaken for male.

Once Riot gives her word, she does all she can to keep her word, even if means missing out on something with her friends. She tries to be respectful, but won't give if it is not earned. Breaking her word is not an option.

A lesser taboo Riot holds to herself is not drinking on the job. Her mind is her best weapon, so she likes to keep it nice sharp.

Common, some words in Draconic.

A safe, ands table comfortable living situation, a good fight, and mastering the lightning and thunder magics she knows.

"Disappear in the lightning, fall to the thunder."

"See, I'm electric, and next comes the thunder."

"Choices are quick, like lightning. A flash, and its over, its done. Consequences is the thunder after. Will you be able to stand against the roar of the thunder, or buckle under the actions you set in motion?"

Likes: Women who can: kick her ass, make her feel loved/needed, someone she can protect, a woman that can toss her around or a woman she can pin under her, dark drinks, meat, spicy food, bitter coffee and teas, rainstorms, a good fight, soft music, the sound of distant thunder, the smell of lavender, the small right before a rainstorm, and the smell of ozone after a natural lightning strike or after she casted lightning.

Dislikes: People you don't back up their claims, people who don't commit to a decision, someone who backs down from the consequences of their actions, bad people abusing their power for gain while watching the world burn, people of power that keep gaining while the little guy keeps losing, people who break their promise/word, overly sweet foods, loud tavern music, dry heat.

Righteousness (義, gi)
Be acutely honest throughout your dealings with all people. Believe in justice, not from other people, but from yourself. To the true warrior, all points of view are deeply considered regarding honesty, justice and integrity. Warriors make a full commitment to their decisions.

Heroic Courage (勇, yū)
Hiding like a turtle in a shell is not living at all. A true warrior must have heroic courage. It is absolutely risky. It is living life completely, fully and wonderfully. Heroic courage is not blind. It is intelligent and strong.

Benevolence, Compassion (仁, jin)
Through intense training and hard work the true warrior becomes quick and strong. They are not as most people. They develop a power that must be used for good. They have compassion. They help their fellow men at every opportunity. If an opportunity does not arise, they go out of their way to find one.

Respect (礼, rei)
True warriors have no reason to be cruel. They do not need to prove their strength. Warriors are not only respected for their strength in battle, but also by their dealings with others. The true strength of a warrior becomes apparent during difficult times.

Honour (名誉, meiyo)
Warriors have only one judge of honor and character, and this is themselves. Decisions they make and how these decisions are carried out are a reflection of who they truly are. You cannot hide from yourself.

lack of self control, pride, envy, stubborn to a fault.

When faced with a strong opponent, or someone who royally pissed her off, she will start to chuckle in a low, bouncy way; the louder, the more aggressive she is feeling. When scared or trying to give a warning, she'll laugh loudly and in a high pitched way, baring her fangs.

When lying, she has a tell, scratching her chin or her temple. To keep others from seeing, she'll keep her hands in her pockets, the sleeves of her haori, or cross her arms.

She comfortable with someone or a group, she's more open to touch. She'll nuzzle, get close for cuddles, and lay her head on their lap for head and neck rubs.

She likes to think she keeps herself clean. With access to a bathouse, she'll try to visit it 2-3 times a week.

She has gone at least a month without bathing and would like to never do that again.

Band of the Night Fox

She always tries to have at least a gold's worth of coin on her.

Band of the Fox is family through bonds.

She belives in her spirit Totem, Hyena. 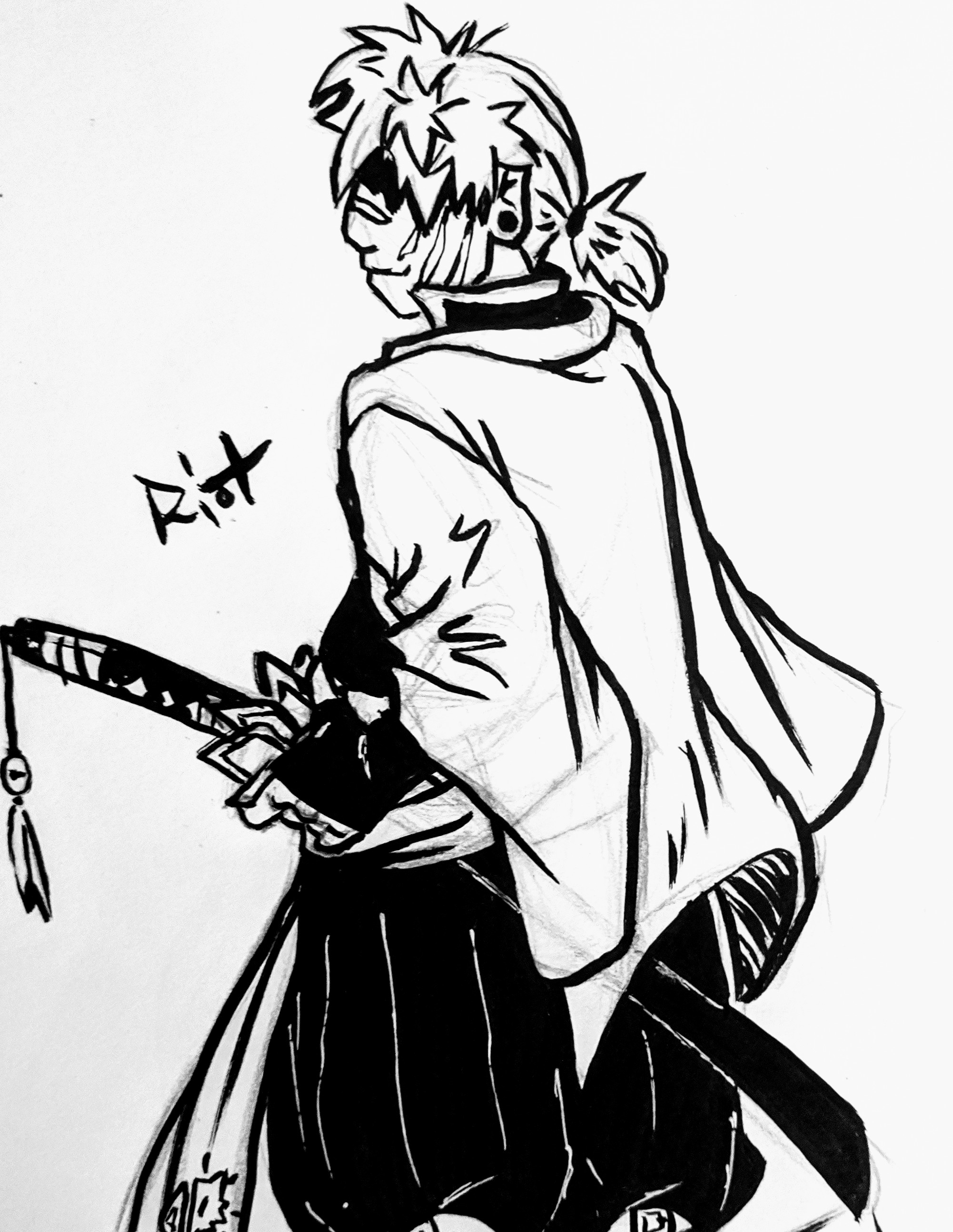 The major events and journals in Riot's history, from the beginning to today.

Late 8th, early 9th of Sypheros, 998 yk I swear, drinks never effected me the way some of them do here in Millmire. Hi, journal. Successfully made it to Millmire on Ashon. A nice city, so far. But, I guess the biggest thing I'd like to get off my chest...

The list of amazing people following the adventures of Riot.