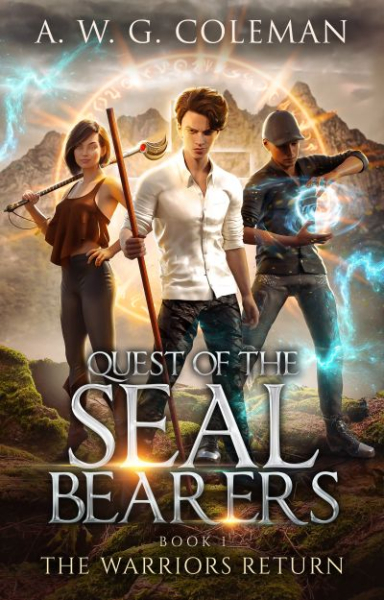 In the world of Mendala

Veda Guardman looked around and all she saw where four shimmering white walls. She remembered going to sleep in a plush bed inside of one of the suites in Fantasmal Mountain, but now she was here, standing in this empty white room, and she knew that she’d been here before and what that meant.

If this had been her first visit to the room, she would have been able to dismiss this as a dream, something her tired mind had conjured up, but now she knew better. Being in this room, a place she had learned was called the Waiting Room, meant that she was about to learn something important. She just needed to wait for the messenger.

“Veda,” came a voice from behind her and she jumped, despite expecting this.

“Is there some reason why you always feel the need to appear behind me,” she asked in a curt tone as she turned to face the owner of the voice, a young-looking man in a white robe.

The man was tall with long white hair, golden tanned skin, and shimmering amber eyes. “I thought it would be better than popping up in front of you,” he said.

“You could just—I don’t know—walk through a door.” Veda gestured at the solid white walls. There were no doors.

“I apologize.” He chuckled. “It’s not my intention to scare you.”

Veda sighed in resignation. “Why am I here again? I thought you said last time that we wouldn’t see each other again?”

“You are right, and I am indeed stretching the limits of my authority by reaching out to you while you’re on Mendala.”

“Your authority?” Veda stared at him quizzically. “Who exactly are you? I’ve never thought to ask before but after all of this, I need to know. Are you an angel?”

She made to sit, and a white chair appeared beneath her as she did. This was expected; the Waiting Room provided for the needs of its occupants. It was one of its functions.

“I am not an angel. Though my authority indeed comes from the heavens, my function is different. I am Zeta, a gatekeeper. Earth is under my purview, but Mendala is not. However, Mendala and Earth are connected, and not just because of what happened years ago. It’s very complicated.”

“I’ve never heard of a gatekeeper. What does that mean? What do you do?”

“I am responsible for one of the twelve gates between the heavens and the mortal realms.” Zeta said, but he could tell that Veda still didn’t understand. “Think of it this way: creation comes into existence by the will of the Creator; my role is to translate that will into its tangible results. If God is the architect, then I am somewhat of a construction manager, though that is far from an exact parallel. In any case, a gatekeeper is responsible for caretaking creation until it is handed over to the ensouled. After that, we must not intervene except when a new will for creation is handed down from the heavens. However, if something major goes amiss within creation, gatekeepers are allowed to notify the designated caretakers of that specific realm, and in some cases give them information or resources to help.”

“Okay…” Veda tried to process everything that Zeta said. It was a lot to take in, but she understood that even if Zeta wasn’t specifically an angel, he was indeed something supernatural, something beyond her worldly knowledge.

“I admit I still don’t fully understand. Basically, when something world changing is about to happen, you warn people, but why did you pick me? Why not one of the others? I’m not even a part of this.”

“That’s where you’re wrong; you’re definitely a part of this,” Zeta said. “I know because you’re able to transverse the barrier of the Waiting Room. Only certain people can do that.”

Veda faltered at this. “But still, wouldn’t it be better to talk directly to one of the seal bearers or even the Fantasma?”

Zeta shook his head. “What it comes down to is this: you were the only one who was listening.”

“I did not choose you. I called out, and you were the only one prepared to hear my call. I don’t know why,” he added quickly, for he could tell that was the next question on her lips, “but of all those who could have come here, all those who could have heard me, you were the only one to answer. Perhaps it’s because your heart is open to the call of destiny while others are too busy trying to live it out.”

“Oh…” Veda was clearly stunned by this pronouncement.

Zeta took advantage of this stay in questioning to continue forward. “We do not have much time, and I have called you hear for a reason.” He went to one of the white walls and put his hand on it. Immediately the wall sprang to life producing a vivid image, as if it were a giant television screen.

Veda saw her son from a bird’s-eye view. “They’re okay!” she said excitedly. “Where is he?” She tried to look at the surroundings, but it was too dark to distinguish anything.

“I don’t know,” Zeta said. “I’m not familiar with this world. I can only tell you that this image is from just slightly in the future. I can only see so far ahead as events unfold.”

Suddenly Wayne collapsed, clutching his head. It was clear he was in pain and panicking.

Veda stood in shock. “What’s going on? What’s happening to him? Is he hurt? Is he being attacked?”

Zeta tapped the wall, and the image froze. “This is not due to an attack; it’s something much worse. This is why I summoned you again. You, the Daughter of the Sun, the seal bearers, and the Fantasma will all face challenges, some of them seemingly insurmountable, but they must be faced without outside help. However, this is something that no one could anticipate, something that could kill your son before anyone even knew what happened. Unfortunately, your husband died before he could pass on the knowledge.”

Zeta pointed to the image. “You’ll notice that Wayne is missing his hat.”

“Yes; well, it was actually his father’s. Why is that important?”

“That hat, or rather the material that the inner lining is made of, has been passed down through your husband’s family because they have a rare genetic adimus abnormality that comes into effect when they use mentus or mandamus. It’s known as acceldermitis. It increases the active learning memory which allows them to master mentus and mandamus far quicker, but the rapid activity of the adimus can lead to painful headaches that only increase over time. I know this only because I looked back in the past to see it explained to your husband’s ancestor. They created a hat using a special type of quartz that stabilized this condition, and the material of that hat was passed down through your husband’s line, all the way to Wayne, who inherited it purely by happenstance, it seems.”

“When his father died, Wayne took it and just never wanted to take it off, just like his father,” Veda confirmed, “and Sam said the hat was special, but I never knew that’s what he meant. Where is it then?”

“I only know that it was lost in transport between your world and Mendala. It could be anywhere.”

“Well, that narrows it down,” Veda said sarcastically.

“I’m sorry, I wish I could tell you more. Please understand that I’m not being cryptic because I wish for you to solve a puzzle, or as you once put it: ‘jump through hoops.’ I know only so much, and there are limits to how much I can render assistance. Unfortunately, this realm no longer has an active empowered gatekeeper, which is one of the reasons why things have fallen so far out of balance. Still, it is ultimately the caretakers of this realm who must set things right.”

“Why doesn’t Mendala have a gatekeeper?” Veda asked.

Zeta frowned. “That is a long and complicated story. Gatekeepers must follow strict rules and Epsilon broke them. Even now, I fear that my traversing to this realm could have serious repercussions. Still, though this is not my world, you all are technically under my purview. I suppose that is why I was allowed access into this realm’s Waiting Room.”

“This realm’s Waiting Room?” Veda repeated. “So, this is different from all the other times you brought me here? It looks the same.”

“That’s because it is. The Waiting Room exists separately for every realm even though it is the same place. In order for me to contact you while you’re on Mendala, I took a risk accessing the Waiting Room to connect to this realm, I didn’t know if it would grant either of us entry since it blocks all who are not allowed.” He smiled warmly at her. “You truly are a remarkable woman, Veda Guardman.”

“How so?” Veda asked, taken aback.

“To have access to the Waiting Room is extraordinary enough, but to have access to it through two separate realms, I didn’t even think that was possible. That’s why I’m so sure you are integral to the fate of this world.”

Veda shook her head. “I don’t feel like I’ve been able to do anything particularly important. The last warning you gave me—about the teens discovering the truth on their own and ending up in the cave—all of that came true. I couldn’t stop it; just like I couldn’t stop the events leading to the accident. Everything you’ve showed me is just happening; I’m not changing anything. It’s all out of control. How am I going to stop my son from dying if I couldn’t even stop them from going down to the cave?”

Zeta smiled. “When I told you what was to come, it wasn’t so that you could try to stop it. These glimpses were always going to happen, but you have made changes, even if you don’t realize it. You being on Mendala with the seal bearers, I’m certain will also make a huge difference in the success of things to come.”

“We rarely feel the impact we make in the moment,” Zeta said sagely, “but I’m sure you will soon. The seal bearers need you if they are to succeed, and in the case of your son and his hat, the need is especially tangible. You may not be able to stop what I’ve shown you, but you can prevent the dangers that loom beyond for him if he doesn’t have his hat. You must find a way to help him.”

“I know you will,” Zeta beamed again. “Now, I can feel our time is coming to an end. The Waiting Room seems to be done indulging this transversal of realms and I doubt I’ll be able to return to you again while you’re here on Mendala. However, I suspect that soon someone else will come here to watch over things now that the Daughter of the Sun has returned. It may be that in the future you’ll find yourself here once again, just not with me. For now, I wish you all the grace of the heavens on your journey, Veda Guardman.”

With those words, Veda felt herself leaving the white walled sanctuary of the Waiting Room.