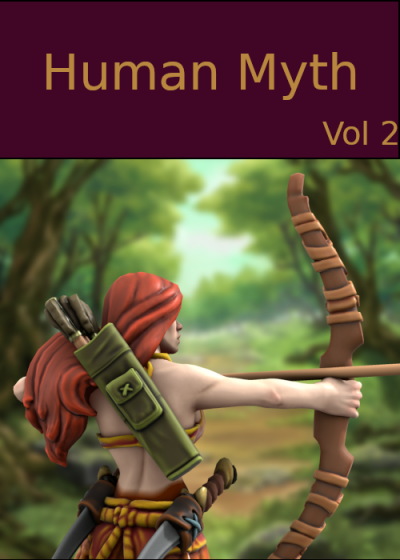 They travel some distance before setting up camp. Nasha and Kenta watch as John tries to keep Papi in the camp and not running into the darkness. Though John has caught her several times after she has fallen. He also has used an old bag as an outfit for Papi. Nasha speaks up after John’s third failed attempt to keep Papi from running “Why don’t you just tie a rope around her and a tree?”

John snaps back “NO! She has probably been traumatized by being tied up in the first place. I’m not going to have her relive that because she can’t sit still.” Papi slips from John’s grip and John chases her and grabs her arm near her shoulder and gives it a quick squeeze to cause just enough pain to stop her from moving. He turns her around and lets her go.

Kenta says as she settles down “I believe he has a point. For the last hour, I could feel her getting antsy while sitting on my back.” Kenta grabs Papi as she tries to run past her and redirect her back into the campsite.

John says “Nasha, why don’t you form a perimeter with your tail?”

John says “Just make a circle with your tail like when you are about to go to sleep. It will be hard for Papi to climb over you and she may get the idea that she has to stay within the area.” Nasha reluctantly does what John says.

Nasha pushes Papi back when she tries to climb over Nasha’s tail. Papi starts to make a game of it to see how long she can hold on to the point of annoying Nasha. John pulls Papi off and tries to keep her from doing it again. Nasha says “Why do you care about that Harpy.”

John says “She is a child. Why don’t you care about harpies?”

Kenta meanwhile has pulled out her sword and has started working on it. Kenta says “Because they are uncivilized and unruly.”

John says to Kenta “I could say the same about you at times and besides I think it would be hard to develop culture when you don’t have hands.” John holds up Papi’s wings to show them to her.

Nasha says to John “Where did you get her name from?”

John says “uh, from a story I read once. I felt it would fit her, at least until we find out her real name.”

Nasha says to Kenta “Are we going to practice tonight?”

Kenta says “Not with her running around.” Kenta takes out a whetstone and starts working the edge of her blade. Papi comes up to the side of Kenta and watches her work. Kenta sets the stone aside to check her work. But the stone is gone when she reaches for it again. Kenta beings looking around for saying “Where the gods did that thing go?”

John chuckles and motions to Papi who is scratching at whetstone with her feet at that moment a few feet away. Papi had grabbed the stone with her foot when Kenta had set it down. They all watch Papi for a moment, then John gets up and walks over and picks Papi up in a bridal hold. He holds one of Papi's feet up to the firelight and says “Her claws have been clipped!”

Nasha says “so what.”

John says “well it explains a lot.  Some birds use their claws to grip while walking. It’s why Papi has been falling over all the time. She can’t get a grip on the ground.” John looks at Papi’s claws and then says to Kenta “Kenta do you have a file on you?”

John says “I want to try something.” He lays Papi on her back and holds her down until she stops squirming. He then holds one of her feet up and takes Kenta’s file to the broken claws.

Nasha and Kenta move in closer to watch him work. Nasha says “What are you doing?”

John says “I’m trying to shape a point for her to use.” John slowly works the claw.

Nasha says “You should go with the grain.”

John says “Do you want to do this?” Nasha back off.

Kenta says “Here let me try for a bit.” John lets her take over.

John picks Papi up and sets her on her feet again after they have given her big claws a bit of an edge to them. John says “That should help out.” Papi digs her claws into the ground and then starts to walk around. She even bats at the pack saddle with her claws.

Kenta says “There wasn’t a lot to work with.” Papi yelps and comes back to John holding her foot up. John sees she broke the new claw while testing it out.

John says “Let’s hope her claws grow back quickly.” He grabs her and holds her in his lap. Papi doesn’t seem to fight him and just sits there.

Kenta looks at Nasha and says “Perhaps she has settled down enough that we can practice after all.”

John and Papi watch Kenta put Nasha through her paces and soon after they start to get ready for bed.

John playful fights with Papi as she doesn’t seem to want to settle down for the night to sleep. But she stops when John starts humming while she is on his chest and she even lays her head down on his chest. John starts stroking her head and soon finds she has gone to sleep. He also falls asleep soon after.

Kenta and Nasha were watching the whole time. Kenta says towards Nasha “He’s good with her. I know very few stallions who could boast such a skill. It makes me look at him in a different light.”

Kenta says “Well for some mares that would be an invaluable skill for a suiter to have.”

John wakes up the next morning only to find Papi missing from his arms. He quickly looks around in a panic, but then sees Nasha in as tight a coil as she could get herself in. John walks up to Nasha and sees Papi next to Nasha’s body in a tight embrace. He reaches in to check on Papi. Papi stirs and looks at him then goes back to sleep. Kenta says “Don’t worry. I have been watching them. I don’t think she can get any tighter.”

John looks at Kenta then looks at the site. He realizes that Nasha was again drawn to his warmth, but she grabbed Papi and wrapped around her instead of him. John starts getting the fire going again to warm Nasha up. Soon Nasha stirs and sees she is holding Papi. Nasha pushes Papi away when Papi sheepishly tries to stay near her.

Papi wakes with a yawn and heads to John. John realizes Papi is probably hungry and gets some dried jerky for her. John says to Papi “It may not be the best, but you need to eat.” Papi opens her mouth upon seeing the jerky. John thinks she is acting like a baby bird. John then looks at her wings and sees what looks like thumb claws on her wings. He realizes she may be afraid of dropping the food if she tried to use her wings or feet. So John feeds her small pieces that are enough for her to chew on in one bite.

John helps Kenta get her pack-saddle on and Papi runs over and starts climbing on as Kenta stands. John helps Papi get seated right and says to Kenta “Let me know if she starts getting antsy and I will get her down and have her walk for a bit.”