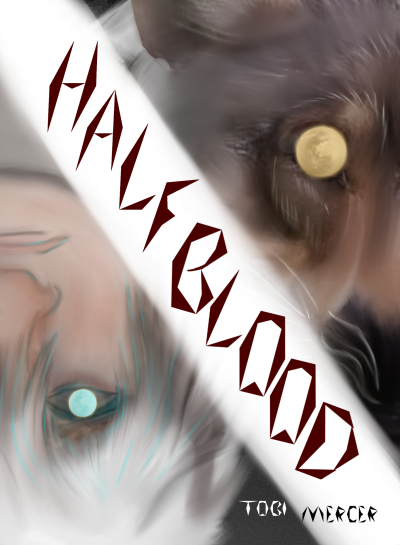 We let the river carry us until we finally hit land. Then we were up, running on adrenaline as we fled over the fields. I didn’t realize my hand was clamped around her arm until she stumbled and fell, taking me with her.

She looked up, trying to say something, but I clamped a hand over her mouth with a harsh “SH!” and listened. Nothing. No one was chasing us. Breathing a sigh of relief, I took my hand away and relaxed, forcing my breath to come in slowly and trying to make my heart slow down.

“What… was that?!” the kid wheezed. I glanced up at her, her face drawn and still pale.

“What was what?” I responded, getting to my knees and taking in another slow breath.   “…you shoved me…the river…You could’ve drowned us both!”

“Oh.” I took a final shaky breath and stood. “I knew you’d be good. And at least we’re away from that Keeper.”

She managed to get to her knees, her whole body shaking. “But…you...I-!”

I shook my head, already moving on and looking around. We were somewhere way downstream...Possibly the next state over. Or near enough. I wish knew more about the borders between the american territories; seemed like every time I learned the names for everything they changed what was where.

Layla kept talking while I struggled to figure out based on surrounding fields and approximate location which states were around the Cumberland River and how close we were to...any of them. “Yeah. The walls are only plaster and drywall.”

I stopped and looked at her. “What?”

She was staring, confused and a little startled as it slowly dawned on her how little I had been listening. I waited an uncomfortably long amount of time before asking again. “...What?”

“Same plan,” I answered, motioning her to keep up as we moved. “Find our way to a Community where Darius can find us. Stay put until he does.” I glanced at her. “Maybe figure out why the Keepers are after you.”

She hesitated, finally shutting her mouth behind a firm pout.

Ah. So, she probably knew why and didn’t want to tell me. Which should be fine until someone or something tries to kill me.

Finally venturing a short defense, she quickened her pace behind me. “I didn’t—“

I nodded and cut her off. “--didn’t do anything. I’m sure.” I shot her a suspicious look. “I can’t really believe that, though, seeing the company you were with just an hour ago.”

“It’s not any different from the company I’m with now,” she muttered, crossing her arms.

“You really are new at this, aren’t you?”

She glared, but suddenly halted mid-step. “Did you hear that?”

A number of creatures were padding towards us from all directions. The scattered noises along the forest floor made it hard to count how many there were, but it seemed they out-numbered us greatly. The footfalls were extremely light, meaning they were small in size. A haunting giggle danced around us, laced in the fading shadows of the night. The sun was a few hours away yet, but it wouldn’t be in enough time to stop what was coming.

I paced backward, thinking quickly. My other hand was going for my knife, but if there was more than one of them it wouldn’t save us. And there were always more than one.

I yanked the knife free. “Keep your gun out of sight and keep quiet,” I whispered. “If things get hairy, run and don’t look back.”

“Who are they?” she whispered back, breath coming in small panicked gasps. “More Keepers?”

As I spoke, several pairs of eyes glared out at me from the darkness above. I brandished my silver knife, snarling enough to show my teeth and elongating my fangs. The creatures revealed themselves in the moonlight, little bodies slipping down the bank in silence.

Unlike Darius, they held a shape similar to foxes, the coats ranging from blood red to midnight black peppered with silver. Each delicate nose quivered at us, slim wisps of whiskers shimmering with the movement. Each Fox lined up on the bank, their round paws making barely an imprint in the mud underneath them.

Orieiifio. Smart, capable, sharp-toothed deal-makers. A few of their clan had come over with ours, but these days only two groups came into the light; one group that would help you hide, and one group that would smother you into compliance one way or another. These smelled like the latter, deep earth and warped magic surrounding their peppered hides.

A pack of Ononisrare could take a tribe of Orieiifio easily. But I wasn’t a pack. While diplomacy was the lowest on my priority list of things to get good at, it seemed like a good idea to try.

Only one moved into the water, making no noise as it did so. The large bushy tail twitched once as the Fox lowered her head slightly, deep blue eyes staring out at me from a silver mask painted around her eyes. Old manners. It didn’t matter; I knew their leader. Honor meant nothing to her.

I used my free hand to answer, extending my middle finger. A fun little gesture I learned from being on earth too long.

She flicked one of her over-sized ears and raised her head again, understanding. Her small snout rippled with wrinkles as she exposed her needle-like teeth in wide grin.

“What do you want, Sierra?” I snapped.

“Give us the elven child,” she said, her voice harsh wisps upon the air.

I snorted. “Last time I checked, neither was I.”

The grin deepened, the wrinkling growing along her snout and nearly touching her eyes. “And we dealt with you, didn’t we?”

I ignored the prodding of my old wound. “I’m not giving over this girl so you can kill her.”

She laughed, the skin around her mouth peeling back as she shook her head from side to side. “Don’t pretend to care, Guardian.” She spat the words at my feet as she said them. “She is as much a danger to you as she is to us. Hand her over and our Alpha may forgive you.”

“There’s nothing to forgive,” I snapped. “I’m not a Guardian any longer, and I’m not handing over the girl. Your master can kiss my ass.”

Her big ears flicked forward and she tilted her head. “She is a threat to all Marwolaeths,” Sierra insisted, taking a step forward. “To keep her is to condemn all of us. You would curse your own species to extinction?”

I shrugged. “I would curse you.”

“So be it,” she rasped, her face widening, her needle-teeth bared. She lunged forward and I readied my blade. So much for diplomacy. The rest of the Skulk surged forward.