The black chick infestation has been brought under control through the diligent use of relatively simple folk remedies. The administration has apologized for doubting the aswang phenomenon. We now encourage everyone to follow simple apotropaic procedures to avoid becoming a host.
— Instructor of Recruits

My jewelry is silver. My boots have cold iron toes. My adobo is full of garlic, salt, and vinegar. My riding crop is made from a stingray's tail. No black chicks are gonna crawl into any of my orifices!
— Sgt. Kill Flayer

The black chick is a tiny parasitic creature native to the Feywild and Shadowfell. It crawls into the mouth, nose, ears, or any other orifice that it can fit into and takes up residence in the guts of its host. The black chick can also be ingested as a black balut by those who want to receive the curse willingly. Hags and Far Realm warlocks are known to sell "black baluts" to unsuspecting customers to convert them into controllable forms of warlocks.

The infestation can turn the host into one of four different types of aswang. Some who desire unnatural power can also willingly consume a black chick to willingly become the fifth type of aswang, a warlock.

The types of aswang are: ghouls, vampires, viscera suckers/manannangal, lycanthropes, and warlocks.

The black chick parasite can be expelled with any number of daily items. Unaware hosts avoid these everyday items without realizing it. Aware hosts have to intentionally avoid them to keep their power.

Hosts that ingest salt, garlic, vinegar, or ginger can force the black chick to crawl out of their mouths. The parasites also abhor silver, cold iron, and the holy symbols of good deities. Once expelled, it can be captured and destroyed with holy water or the appropriate divine rites.

Frequent participants in Adobo Night are unlikely to harbor a black chick. Those who don't participate are often suspected to be an aswang. 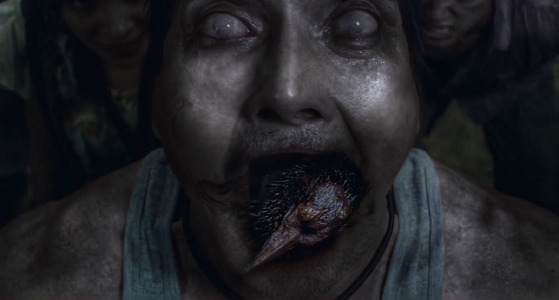 Hosts of a black chick nearing death are overcome with an urge to transfer their parasite. They find a sleeping person, often a family member and put their face close to the new victim. The parasitic bird emerges and moves on to the new host, leaving the old host to die. Black chicks can live forever as long as they can find new hosts.

Dark spirits or ordinary people transformed into monsters by a tiny parasitic fiend.

Answering: "Describe any condition or disease for which a cure has recently been developed."
Visit kitoypoy's Competition Page Check all other answers to this prompt Competition Homepage